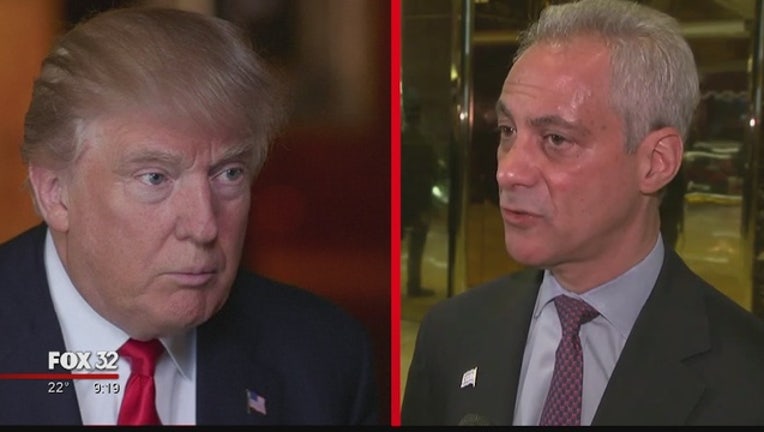 CHICAGO (AP) — President-elect Donald Trump says Chicago Mayor Rahm Emanuel should ask for federal help if he isn't able to bring down a homicide count that soared last year to 762 — the most killings in nearly two decades and more than New York and Los Angeles combined.

Trump pointed to the spike in deaths in a Twitter post earlier this week, writing: "If Mayor can't do it he must ask for federal help!" Emanuel spokesman Adam Collins responded in a statement by saying that if the federal government wants to help, it can fund summer jobs programs for at-risk youth and pass meaningful gun laws.

Trump isn't the first to broach the idea that the U.S. government could do more to help stem predominantly gang-related violence on Chicago's South and West sides. But now, as on earlier occasions, what more the federal government can do isn't at all clear.

Here's a look at the issue and some of the options that might be available:

The most direct — and most extreme — intervention would be sending National Guard troops into Chicago to try and tamp the violence. Both the U.S. president and the Illinois governor have the authority to mobilize the Illinois National Guard. But federal statute, known as the Posse Comitatus Act of 1878, prohibits federal troops from being deployed in civil law enforcement. While a president could try to find legal loopholes to get around that prohibition, the legalities of any such deployment would pose major obstacles. A heavy-handed intervention could upset many conservatives who advocate for states' rights.

Trump has not broached the possibility of using troops, although the idea comes up from time to time in Illinois. When someone asked Illinois Gov. Bruce Rauner about the possibility in August, he ruled it out. He said he had discussed the idea with police, community leaders and the National Guard and that "no thoughtful leader thinks that's a good idea or would really provide a solution."

Current U.S. Attorney Zachary Fardon came under pressure when selected to be the top federal law enforcement official in Chicago three years ago to put violent crime at the top of the city's agenda. But from the start of his tenure, he tempered expectations about what a U.S. attorney's office could do. He had said repeatedly that communities couldn't arrest their way out of the problem of violence and that a more holistic approach — one that also addresses socioeconomic problems — is required.

Fardon said in a September speech that his office and federal agencies including the FBI, DEA and Bureau of Alcohol, Tobacco, Firearms and Explosives "have ramped up their resources to help tamp down this spike in violence." He also said federal agencies had launched new crime-fighting programs with city and state officials, though he didn't provide details. He added about the bid to bring violence down: "Suffice it to say all oars from those agencies, including the FBI, are in the water right now."

Then-U.S. Attorney General Eric Holder promised in 2014 that the Department of Justice would do what it could to fight gun violence in Chicago. That was easier said than done. A records review by the Chicago Sun-Times found numbers of federal gun cases out of Chicago declined from around 2012 to 2015. It started trending back up in 2015, with 84 defendants charged under U.S. gun statutes between mid-2015 and mid-2016. Responding to the Sun-Times, Fardon wrote in the newspaper in October that the drop-off in gun charges in 2014 to less than 60 had at least something to do with a federal hiring freeze, when his office went from 172 prosecutors to below 130. The numbers are getting back up to where they need to be, he said. He said half of his prosecutors are focused on the types of cases linked to street-level violence.

Going back decades, a cornerstone of anti-violence measures by U.S. attorneys in Chicago has been to convict and imprison gang leaders. Federal prosecutors in Chicago have used racketeering and gun laws to go after gangs, who police blame for much of the deadly violence. One of the largest street-gang cases in recent Chicago history is wrapping up this month in U.S. District Court, with six reputed leaders of the notorious Hobos street gang on trial for an alleged racketeering conspiracy that prosecutors say included at least nine killings. But many gang experts point to an unintended consequence of prosecuting gang leaders: Breaking up a gang's command structure can often lead to more inter-gang rivalry and, therefore, to even more violence.