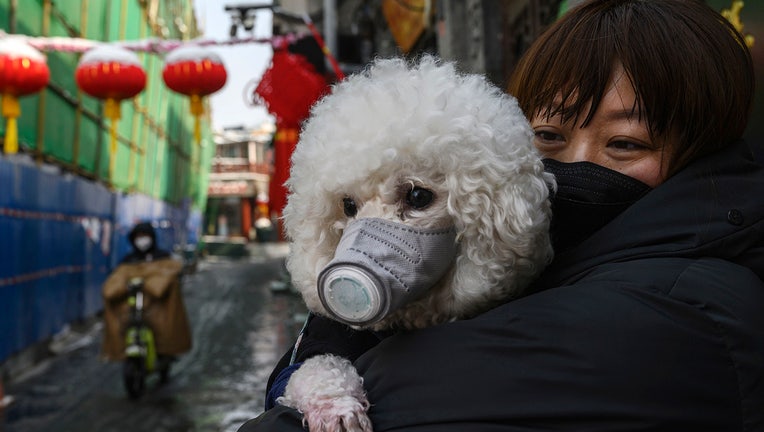 A Chinese woman holds her dog that is wearing a protective mask as well as they stand in the street on February 7, 2020 in Beijing, China. NOTE: This is not the dog that tested 'weak positive' for the virus. (Photo by Kevin Frayer/Getty Images)

HONG KONG - The pet dog of a coronavirus patient was placed in quarantine on Wednesday after testing "weak positive" for the virus in Hong Kong, according to a government press release on Friday.

If confirmed, it would mark the first case of the virus in a pet animal, as infected numbers topped 82,000 worldwide on Friday and sent U.S. stock markets to their biggest daily drop in history yesterday.

"At present, the AFCD [Agriculture, Fisheries and Conservation Department] does not have evidence that pet animals can be infected with COVID-19 virus or can be a source of infection to people," a department spokesman said.

AFCD staff picked up the dog from an apartment in the city and sent it to an animal keeping facility where oral, nasal and rectal samples were collected -- that tested positive for low levels of COVID-19. The dog doesn't have any symptoms of the virus, but the virus can reportedly spread without them showing up.

Further samples will be collected by the AFCD to confirm if the dog really was infected or if the positive test was a result of "environmental contamination" of the animal's mouth and nose, the spokesman said. The pet will be closely monitored.

The department "strongly advise[d]" that the pets of patients infected with the virus should be placed in quarantine for 14 days -- COVID-19's reported incubation period.

The news brings more uncertainty over the virus, as officials have yet to determine its origin or understand how an infected person could be determined healthy and later test positive -- like the recent case in Japan on Thursday.

Pet owners are advised to maintain a good habit of hygiene and wash their hands "thoroughly" with soap or alcohol sanitizer after touching their animals.

"If there are any changes in the health condition of the pets, advice from veterinarians should be sought as soon as possible," the spokesman said.

No other animals are currently at the facility, according to the AFCD release.

According to the Centers for Disease Control and Prevention, COVID-19 is a new coronavirus that has not been previously identified. The virus causing COVID-19 is not the same as other coronaviruses that commonly circulate among humans and cause mild illness, like the common cold.