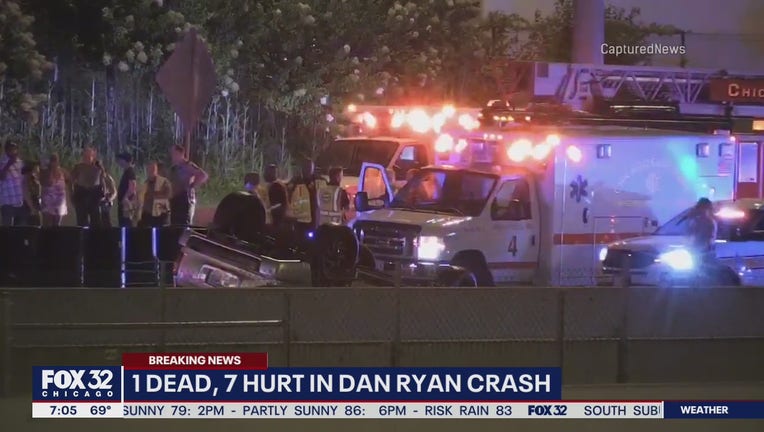 CHICAGO - Two drivers were allegedly driving drunk when they caused back-to-back crashes on the Dan Ryan expressway Sunday, killing a man and wounding several others.

Francisco Carreno, 34, and 45-year-old Sabrina Johnson were both charged with aggravated DUI involving death, according to a bond proffer prepared by the Cook County state’s attorney’s office.

Carreno was driving an Infinit QX4 with four passengers, including three children, at the time of the June 21 crash, prosecutors said. About 12:30 a.m., he struck the left shoulder barrier just past 47th Street and flipped the vehicle over, prosecutors and Illinois State Police said.

Two other vehicles pulled over and three men got out of their cars to help, state police said.

Minutes later, Johnson, who was driving in a blue Nissan Sentra, failed to slow down and struck the men, prosecutors said.

Curtis Deyante Hale Melton, 31, of Maywood, was struck by the vehicle and pronounced dead at the scene, state police said. The other two men, both 25, were struck and taken to the hospital with serious injuries.

A 34-year-old woman and the children were taken to a hospital with non-life threatening injuries, state police said.

On the scene, investigators noticed both Carreno and Johnson had bloodshot and glassy eyes, prosecutors said. Johnson failed on-scene testing for cannabis, and tests found her blood alcohol level was at .127. She allegedly confessed to consuming alcohol and cannabis.

Police recovered an opened case of Modelo beer and empty cans in her vehicle, prosecutors said. They also recovered 15 grams of cannabis in her purse.

Carreno was tested at a hospital, and his blood alcohol level was .20, prosecutors said. He admitted to drinking at a party before the crash, and a grocery receipt listing a vodka purchase was found in his car.

Johnson is due back in court July 13.