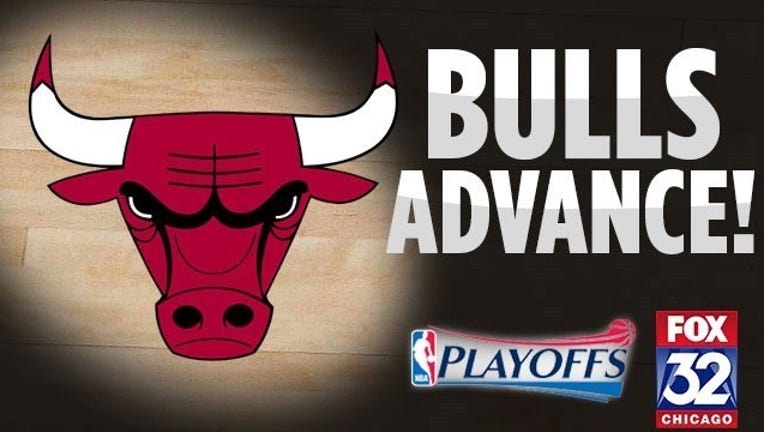 MILWAUKEE (AP) - The Chicago Bulls finally delivered a knockout blow to the Milwaukee Bucks - not literally, although it sure seemed to come close at times. And for all of Chicago's star power, it was Mike Dunleavy in the middle of it all.

Dunleavy scored 20 points and the Bulls came close to an NBA playoff record, finally putting away the Bucks with a 120-66 victory in Game 6 to clinch their first-round series Thursday night.

Dunleavy seemed to have his biggest impact away from the ball, getting under the young Bucks skins with physical play that drew retaliation.

"They had some momentum in the series, won a couple in a row," Dunleavy said. "We came out on their court and put it on them. That's frustrating. If anybody's been there before, that's frustrating, and I understand that."

The Bulls, who move on to face the Cleveland Cavaliers in the second round, finished four points from the NBA playoff record for largest margin of victory. Minnesota beat St. Louis 133-75 on March 19, 1956.

The game was over early, but it still featured plenty of the intensity and bad blood that marked the first five games of the series. Dunleavy drew the foul that led to the ejection of Milwaukee's Giannis Antetokounmpo for a flagrant 2 foul just before halftime.

Pau Gasol scored 19 points and Jimmy Butler added 16 for the Bulls, who started the series with a 3-0 lead before two straight wins by the defensive-minded Bucks put them back in position to tie it. Derrick Rose scored 15 points and all five Chicago starters were in double figures.

"It was definitely a tough battle all series," Joakim Noah of the Bulls said. "To just win like that is exactly what you needed. You go into the next series with a lot of confidence. We had to do a lot of soul searching this series."

In an indication of Milwaukee's misery on offense, no Bucks starter scored more than ZaZa Pachulia's eight points. It was the biggest playoff loss in team history. The Bucks lost by 36 points at New York in 1970.

Antetokounmpo was ejected after a hard foul on Dunleavy during a 3-point attempt that sent him crashing into the front row of fans with 1:34 left in the second quarter. After a review, officials ruled it a flagrant 2.

"Sometimes, you've got to take a hard foul," Dunleavy said. "We've all been there. There's a time and a place for it."

It may have been a reaction to a hand to the face that Dunleavy gave Antetokounmpo a little earlier in the game - an incident similar to contact between Dunleavy's arm and Michael Carter-Williams' face near the beginning of the game.

"He kind of got under our guys' skins," Pachulia said. "Especially he picked the young guys, he picked the right guys, and unfortunately our guys responded and we got hurt. But they're going to learn from it."

It was a rough end to a successful season for the Bucks, who were the league's worst team in 2013-14 but turned it around to earn the No. 6 playoff season under Kidd.

"They're not a secret anymore," Kidd said. "They've got to get better if they want to compete against the best."

The Bucks were never really in this one, though, trailing 34-16 at the end of the first quarter and 65-33 at the half.

"We got better," Kidd said. "The whole experience of being in the playoffs, you can't take that away from those guys, no matter if you lose by 40 or you lose by one. It's a loss. That's it. You move on."

It won't come as much consolation to the Bucks, but it's still a good omen for a team working with local and state officials to put together a funding plan for a new arena: Milwaukee fans finally took back the BMO Harris Bradley Center.

Used to being crowded out by traveling Bulls fans for years, Bucks fans appeared to largely outnumber and drown out their counterparts from Chicago - at least before the game got out of hand.

Bulls: F Nikola Mirotic finished second in rookie of the year voting, behind Minnesota's Andrew Wiggins. "I thought he had a terrific year," Thibodeau said. "He has a very bright future and just has to keep working. I love the way he approaches things." ... Despite the blowout, Thibodeau played his starters well into the third quarter.