A dramatic video of a potentially deadly encounter between a bald eagle and an octopus was posted on YouTube by Mowi Canada West, a salmon aquaculture company based in British Columbia.

VANCOUVER, British Columbia - A dramatic video of a potentially deadly encounter between a bald eagle and an octopus was posted on YouTube by Mowi Canada West, a salmon aquaculture company based in British Columbia.

The group of salmon farmers that took the video posted it on YouTube. The video shows the hungry cephalopod wrapping its tentacles around the bald eagle as it attempts to drag the eagle deeper into the water.

“We weren’t sure if we should interfere because it is mother nature, survival of the fittest,” salmon farmer John Ilett told CNN. “But it was heart-wrenching ― to see this octopus was trying to drown this eagle.”

The video has racked up hundreds of thousands of views since it was posted Dec. 11.

In the video, the eagle can be seen paralyzed with its wings extended as the octopus completely wraps its tentacles around the bald eagle’s body. The farmer then uses a pole to remove the octopus from the eagle, and the great bird flies off, safely landing on a tree branch nearby.

“The octopus swam away unharmed and the eagle recovered on a branch for around 10 minutes before it flew away,” Mowi Canada West wrote on its YouTube page. 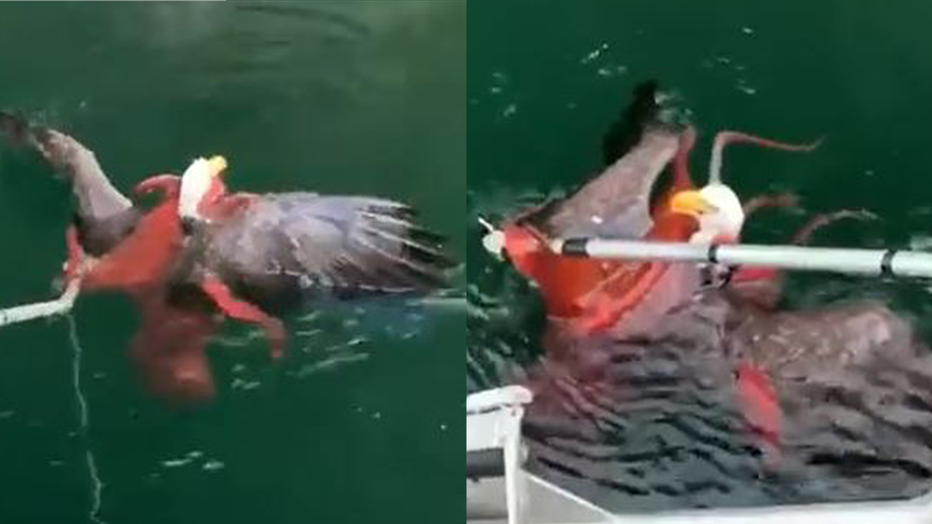 The group of salmon farmers captured video of a eagle caught in the octopus' death grip. (Courtesy of Mowi Canada West)

Once the struggle between the two animals comes to an end, the first word to come out of the fisherman’s mouth couldn't be more fitting: “Wow!”

“They are used to seeing the wonders of nature around them on a regular basis, but they knew that this was a once in a lifetime experience,” the company wrote on its YouTube page.