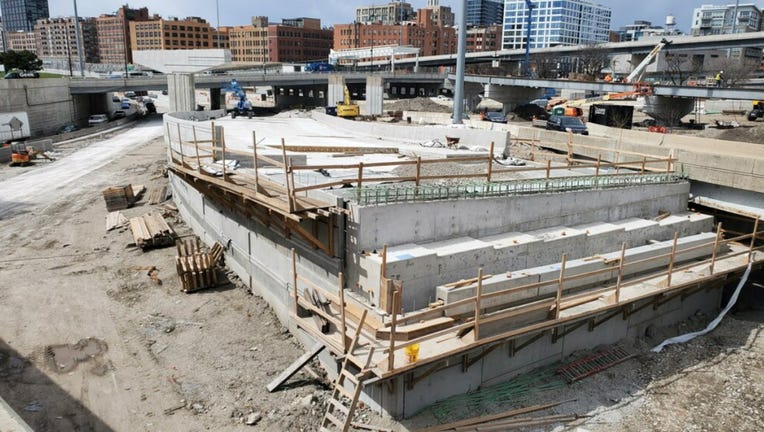 A ramp between inbound I-290 and outbound I-94 will close, weather permitting, June 11, 2020. (Jane Byrne Interchange project website)

CHICAGO - The Jane Byrne Interchange reconstruction will move into another phase Thursday with the shutdown of the ramp connecting the inbound Eisenhower Expressway to the outbound Kennedy Expressway.

The ramp, which serves about 25,000 vehicles every day, will be widened to include two lanes and shoulders, the Illinois Department of Transportation said in a statement.

The construction begins at 8 p.m. Thursday and is expected to end sometime in October, IDOT said. The closure was originally scheduled for June 1 but was postponed by 10 days.

“With infrastructure improvements an essential service, we are committed to keeping this construction season on schedule as much as possible,” said Acting Illinois Transportation Secretary Omer Osman. “The Jane Byrne is among our top priorities. Although traffic volumes are down, please plan ahead and be patient driving through the work zone.”

To get to the outbound Kennedy, drivers on the inbound Eisenhower will have to first head south on the Dan Ryan before making a “Texas U-turn” at the Taylor Street interchange, IDOT said.

Taylor Street has already been closed between Union Avenue and Ruble Street, and will remain that way until the construction is over, IDOT said, though pedestrians and cyclists will still be able to use the south sidewalk. The inbound Dan Ryan will be inaccessible from Roosevelt Road as well.

The Jackson Boulevard bridge over the Kennedy closed in March, and the Adams Street bridge will follow later this summer, IDOT said. Both bridges will reopen in 2022, when the Jane Byrne Interchange reconstruction is expected to be completed.