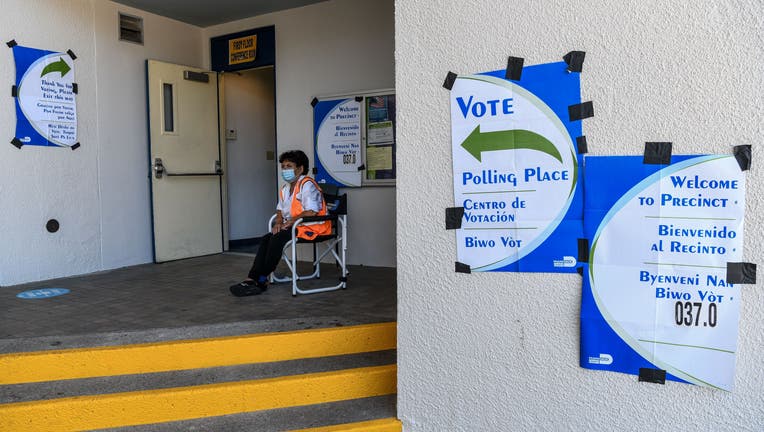 FILE - A poll worker sits outside a poling centre during Florida Primary Election amid the coronavirus pandemic, in Miami Beach, Florida on August 18, 2020. (Photo by CHANDAN KHANNA/AFP via Getty Images)

SALT LAKE CITY (AP) - Voting will look a little different this November. States are turning to stadiums, drive-thrus and possibly even movie theaters as safe options for in-person polling places amid the coronavirus pandemic and fears about mail-in ballots failing to arrive in time to count.

The primary season brought voters to an outdoor wedding-style tent in Vermont and the state fairgrounds in Kentucky. The general election on Nov. 3 is expected to include voting at NBA arenas around the country, part of an agreement owners made with players to combat racial injustice.

Large venues and outdoor spaces allow for social distancing that helps prevent the spread of the virus, though there are questions about keeping people warm as the weather gets cold and the possibility that fewer traditional neighborhood polling places could lower voter turnout.

Election Day is expected to bring a surge in mail-in voting, but some people may feel more comfortable casting their ballots in person amid concerns about recent mail delays following a series of operational changes at the U.S. Postal Service and President Donald Trump stoking unfounded claims of voter fraud.

Several states conduct their elections almost entirely by mail, and mail-in voting is well established in others.

In June, Utah broke voter turnout records despite not opening traditional polling places because of the virus. In-person voting will be back in November, but rather than only using schools, churches and public buildings like usual, clerks also are permitted to set up drive-thru or outdoor polling places.

The family that owns the NBA's Utah Jazz also has a chain of movie theaters and offered three as voting sites in November.

One suburban Salt Lake City county ran a primary polling place where voters drove through an indoor convention center to pick up their ballots, completed them in their cars and then dropped them off in an outdoor parking area. Davis County Clerk Curtis Koch said the system will be in place for the general election, too.

“The more options for voting in terms of mechanisms or ways that people can exercise their franchise I think is helpful,” said Berbert, who lives in Layton, Utah, and works at a management consulting firm.

Less than 1% of Utah voters chose in-person options in June, according to election officials. But in states where voters are less familiar with mail-in voting, unorthodox in-person options will provide a safe alternative, said Charles Stewart, a political science professor at the Massachusetts Institute of Technology.

In Los Angeles, Dodger Stadium will be used as a vote center as part of a joint effort with More Than A Vote, a voting rights organization launched by LeBron James that's dedicated to maximizing Black turnout in November. Many Black voters — one of the Democratic Party's most important voting groups — are wary of voting by mail amid historical skepticism of a system that tried to keep Black people from the polls and worries that a mailed ballot won’t get counted.

Several teams, including the Milwaukee Bucks, Detroit Pistons and Atlanta Hawks, had already committed their arenas to be voting sites prior to the NBA's announcement last week. Madison Square Garden also will be among the sports stadiums used.

The idea to use large spaces for in-person voting started in Kentucky, where Louisville's only option in the June primary was an exposition center at the state fairgrounds. Organizers carefully laid out chalk markings where voters could safely stand in line, though there were complications as voters struggled to find parking at the end of the day.

In Vermont, the tiny town of Lincoln voted during an August primary in a wedding-style tent, clerk Sally Ober said. Being outdoors in the summer gave Ober some unexpected brushes with nature. As she was setting up, she picked up a baby robin from the street and rescued a speckled fawn that got stuck on a fence. A toad also hopped through the tent during voting.

“It was very funny and cute and sweet that wildlife was involved with our voting day,” Ober said.

The primary set turnout records, largely driven by mail-in voting. All active Vermont voters will get a mail-in ballot for the November election, and lawmakers also have allowed for outdoor and drive-thru voting systems.

In Lincoln, Ober is again preparing for people who want to vote in person. But in a state where below-freezing temperatures are normal for November, the tent likely won't make another appearance.