Hundreds of Chicago voters who went to the polls in last month’s primary were being notified of possible exposure to COVID-19, including from a site where a poll worker later developed symptoms and died, election officials said Monday.

CHICAGO - Hundreds of Chicago voters who went to the polls in last month’s primary were being notified of possible exposure to COVID-19, including from a site where a poll worker later developed symptoms and died, election officials said Monday.

Illinois was one of the first states that grappled with rescheduling its March 17 primary during the coronavirus pandemic but proceeded despite safety concerns. Days later, Gov. J.B. Pritzker issued a statewide stay-at-home order.

The Chicago Board of Election Commissioners was sending letters to voters who went to the polls at four locations throughout the city, spokesman Jim Allen said, with at least one more possible location. Either poll workers or voters who later tested positive were at those locations and notified the board. Election officials didn’t have an exact count but said hundreds of letters were being sent.

Chicago Board of Elections officials said a poll worker at a South Side church who used as a voting site developed symptoms days after the election and died April 1. He was a 60-year-old city employee, according to WMAQ-TV.

Illinois State Board of Elections spokesman Matt Dietrich said he had not received similar reports in other parts of the state.

Allen had publicly blasted Pritzker’s office on Election Day for proceeding, but he declined to discuss it Monday.

“The important thing is to move forward with plans for November and try to plan accordingly,” he said. “That’s what’s on the mind of every election administration everywhere.”

The letters note the board “took every precaution possible” but that there was risk of exposure and advise voters to contact election officials if they test positive.

Dr. Allison Arwady, commissioner of the Chicago Department of Public Health, said the incubation period for the coronavirus is believed to be a maximum of 14 days, with five days as more typical. Arwady said she wasn’t concerned about something “that occurred more than 14 days ago leading to infection at this point.”

Pritzker, a first-term Democrat, said holding the election wasn’t a perfect solution and had pushed early voting and voting by mail as safer alternatives. Since then more than a dozen states have postponed their primaries. Wisconsin tried to delay last week’s primary, but proceeded anyway. 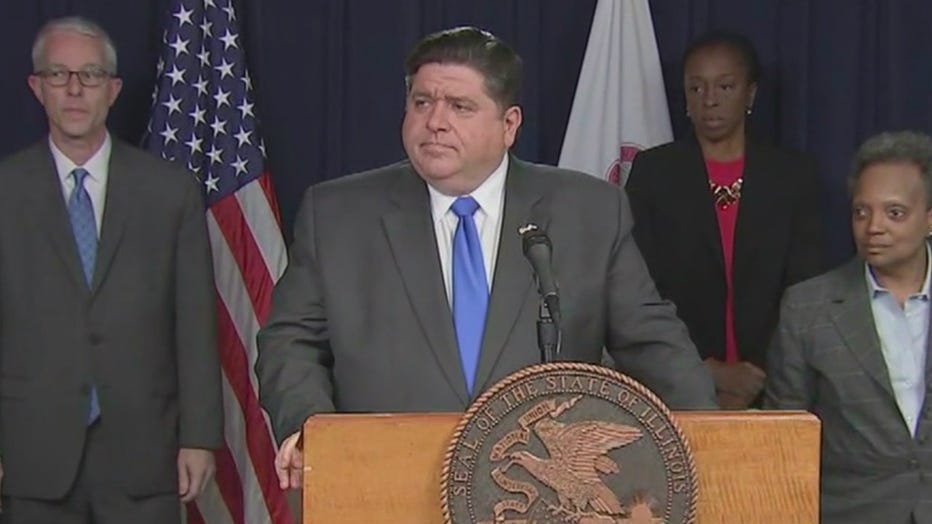 Pritzker said Monday that the governor doesn’t have the constitutional power to shut down an election and Illinois officials provided hand sanitizer and whatever help was requested from local election jurisdictions. Election officials have said that they wiped down equipment between voters and supplied judges with gloves, though election judges have said it wasn’t consistent at every polling place.

“We were encouraging people not to go to the polls if they could avoid going to the polls, and indeed I think that’s exactly the same thing that we need to do even more so when we get to the general election,” Pritzker said during his Monday coronavirus briefing.

Pritzker said he would push widespread mail voting for November, something that Chicago Mayor Lori Lightfoot echoed on Monday.

“What’s very clear to me is we cannot have a repeat of what happened on March 17 meaning we have to put in place every measure that we can to really place an emphasis on voting by mail,” Lightfoot said.