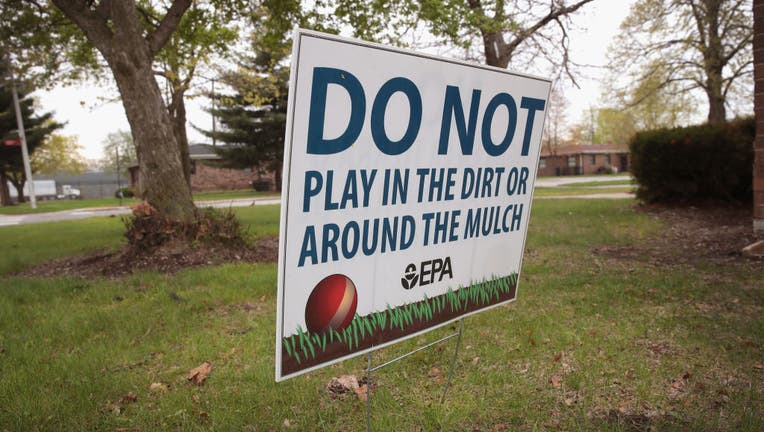 EAST CHICAGO, IN - APRIL 19: A sign, placed by the EPA, warns people not to play on the lawn at the West Calumet Housing Complex on April 19, 2017 in East Chicago, Indiana. (Photo by Scott Olson/Getty Images)

The National Priorities List, which is part of the federal agency’s Superfund program, tracks the nation’s most contaminated sites that threaten human health or the environment. The EPA’s plan to remove the East Chicago properties from that list comes four years after the agency began cleaning up lead contamination in the city’s Calumet neighborhoods.

But critics contend the proposed removal of those properties is premature given the EPA’s ongoing groundwater study, The (Northwest Indiana) Times reported.

“As far as we are aware, EPA did not notify or consult with residents before announcing this proposal and that is totally inappropriate,” said Nancy Loeb, associate professor with the Pritzker Law School’s Environmental Law Clinic at Northwestern University. The Chicago-based law clinic has long worked pro bono on behalf of homeowners who live at the East Chicago site.

“Residents remain very concerned about contaminated groundwater seeping into their basements — an issue raised by residents that EPA has not adequately responded to,” Loeb said.

In 2016, over 1,000 people were forced from the West Calumet Housing Complex after tests found high lead levels in blood samples from some children and some yards with lead levels over 70 times the U.S. safety standard.

Residential properties removed from the National Priorities List may be eligible for the city’s Residential Repair Program, which provides financial assistance for lead abatement within the home. Delisting would also allow the city to redevelop vacant lots, the EPA said.

Remaining properties will stay listed until lead soil cleanups have been completed.

The EPA is taking public comments on its proposal through Aug. 7.