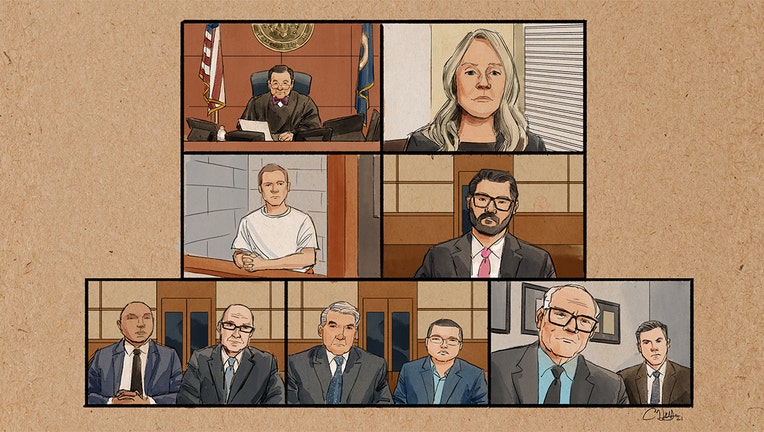 At an arraignment hearing, Derek Chauvin, J. Alexander Kueng, Thomas Lane and Tou Thao all entered not guilty pleas to federal charges alleging they deprived Floyd of his rights while acting under government authority. All four defendants waived their rights to hear the charges formally read out to them.

Tuesday’s arraignment hearing took place via teleconference. Chauvin appeared from the state’s maximum security prison, while the other three co-defendants were seen sitting with their lawyers for the virtual hearing.

No trial date has been set.

Kueng, Lane and Thao ask for separate trial from Chauvin

The judge heard arguments from both parties on several motions, including defense motions asking for Lane, Kueng and Thao's trial be separate from Chauvin’s, who is facing additional federal charges for a 2017 incident involving the neck restraint of a 14-year-old boy.

The judge said joint cases are more the rule in federal court, while severed cases are the exception.

Each defendant had a different argument for why the cases should be severed. Thao’s attorney, Bob Paule, said his client is concerned the two rookie officers, Kueng and Lane, will point blame at the two senior officers, Thao and Chauvin, although prosecutors were quick to respond that the motion is to sever the case from Chauvin.

Lane’s attorney, Earl Gray, said his client’s case should be severed from Chauvin’s because it is "substantially prejudicial." He argued every single jury pool member will know Chauvin has been convicted on state murder charges, which he claimed is unfair.

The judge pushed back on some of the defense arguments, saying all the video evidence available will show who did what at the scene of Floyd’s murder. Prosecutors point out the federal case is not a murder case, but a civil rights violation case.

The judge will rule on the motion at a later date.

Earlier this year, a grand jury indicted Derek Chauvin, J. Alexander Kueng, Thomas Lane and Tou Thao with violating Floyd’s civil rights during the deadly arrest on May 25, 2020. The three-count indictment charges Chauvin with violating Floyd’s constitutional right to be free from the use of unreasonable force by a police officer. Thao and Kueng are charged with failing to intervene and all four former officers are charged with not providing medical care, resulting in Floyd’s death.

A federal grand jury has indicted the four former Minneapolis police officers involved in George Floyd’s death on charges they violated his constitutional rights during the deadly arrest.

Chauvin is already serving a 22.5-year sentence after a Hennepin County jury convicted him for Floyd’s murder. The other three former officers, who are all charged with aiding and abetting, will stand trial in March.