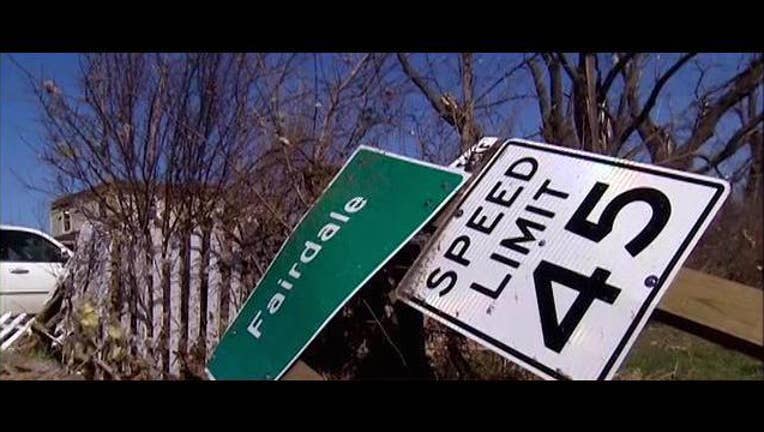 Residents of a small northern Illinois farming community that took a direct hit from a half-mile-wide tornado were allowed back into the area Saturday to assess damage and salvage what they could.

For some individuals, it was the search for answers.

"Why can't we get in there now?! Why is it every other town?! All these other towns aren't safe! These people have their personal property there! This isn't right!"

For others, it was the search for memories.

"What we need right now is the time to get in there and see what we have and the people that have things that can be persevered that we have the opportunity to help preserve them."

The day began early, with the residents of Fairdale gathered in the parking lot of the Kirkland Community Fire District. They were set to board buses at 7 am to return to their homes, but as the minutes ticked by, many of them were angered by the lack of access and began to demand answers.

"Because it's not safe at this point!"

"They've got the roads cleared!"

"To make it safe for the workers!"

"We know where we're going, we know how to drive!"

With personal transportation prohibited for the moment, residents began to file into buses after showing proper ID. They were allowed to bring back anything they could gather and return with on the bus.

However, for Clem Schultz, who lost his wife Geraldine in the tornado, it's just not enough.

"They're saying owners only. Well, I was in the tornado. My wife was one of ‘em that died. Geraldine Schultz," said Schultz.

"I brought help along, to see if I can find anything that I can pick up and carry out of there, but I understand we're going to be very limited," he added.

Down the road in Fairdale, the scene was much more quiet.

Once the bus arrived, residents began the long search through what remained of their homes, picking up anything that looked familiar. From photos, to even a magazine, they put them aside for their memories that were the scattered pieces of lives that will never be the same again.

"I thought my parents were dead," said 32-year-old Adam Davis, who hopped into his truck Thursday and raced along with the tornado in the hopes of getting to his parents' house and rescuing them before the twister struck. He found them standing in their doorway frozen in disbelief and grabbed them just in time.

He was helping collect what could be salvaged from his childhood home, now full of debris, its roof ripped off and its windows broken.

"It's not necessarily the mementos yet; it's the essentials for now. One step at a time," he said.

The weather service gave it a preliminary EF4 rating - its second strongest - with winds of between 180 and 200 mph. It was a half-mile wide and remained on the ground for at least 28.7 miles, a record long path for that part of Illinois.

Al Zammuto, a 60-year-old machinist, was preparing to inspect what was left of the roof on a former schoolhouse that he had been transforming into his home over the past year. He will have to start over.

"I don't know how much of the roof came off," he said. "I'm going to climb a ladder later today and see."

All buildings have been searched, but not all residents have been accounted for, so cadaver dogs are being used in parts of DeKalb County, the Illinois State Police said late Friday.

The tornado blew numerous vehicles from nearby interstates, and troopers helped rescue a trapped driver in an overturned semi-trailer.

As the cleanup began, tales of survival continued to emerge.

Kelly Newman, 46, lost her Rochelle home. For her, the storm began with a moment of playful wonder at the size of the hail. She ran outside to collect some of the pieces to put it in the freezer to show her children.

"Then I noticed to the southwest there was a huge black funnel thing, but it didn't look like a tornado because it was just way too wide," she said.

But the telltale train-like roar sent them and their 19-year-old daughter running for the basement. The house cracked and collapsed around them, raining down debris and a dusting of what she described as "muddy soot."

The family survived, and several police officers helped free her husband, who had been trapped nearly upside down between two collapsed walls.

"We're alive, we were spared. Our lives were saved," she said.