The family of murder victim Rhoni Reuter is speaking out for the first time about efforts by her convicted killer to win a new trial.

WAUKEGAN, Ill. - The family of murder victim Rhoni Reuter is speaking out for the first time about efforts by her convicted killer to win a new trial.

Marni Yang is serving two life sentences for killing Reuter and her unborn child, in a case that drew national attention.

But Reuter’s family is worried the new Lake County State’s Attorney may not defend that conviction.

"We believe she is guilty. She admitted to it. She was convicted of it. And we’re going to make sure that Rhoni’s voice is heard," said brother Thad Reuter.

Rhoni Reuter was seven months pregnant when she was gunned down in her Deerfield home in 2007. She was carrying the baby of former Chicago Bear Shaun Gayle, whom she’d been dating for years.

"Rhoni cared for Shaun. She loved him. She was pregnant with his baby," Thad said.

In 2011, a jury took only three hours to convict Marni Yang of killing Reuter and her unborn child.

Prosecutors say Reuter was jealous because she was also dating Gayle and played a secretly taped confession Reuter made to a friend.

"There’s an overwhelming amount of evidence against her in this case," Thad said.

But In 2019, Yang’s lawyers filed a motion to reopen the case, citing new evidence they say warrants a new trial. 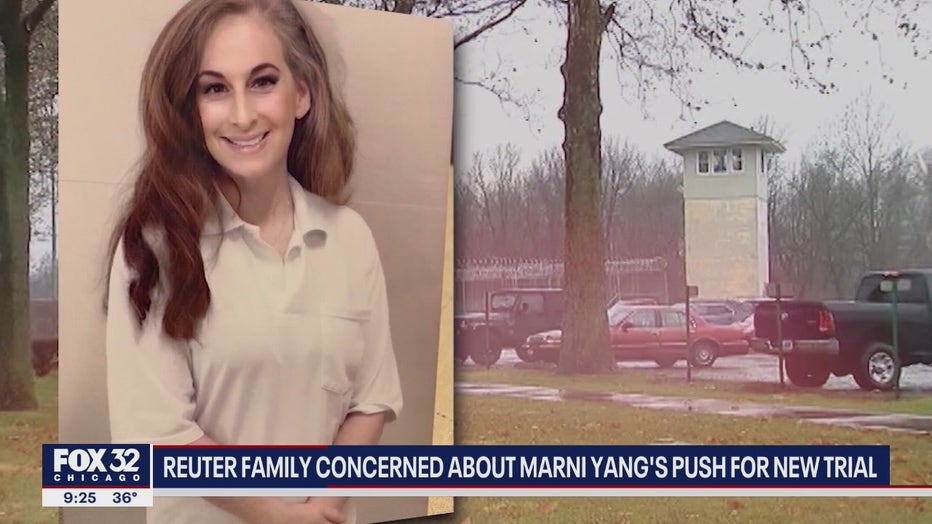 On Tuesday, Reuter’s brother Thad released a letter blasting that attempt, saying there is no new evidence and enough is enough.

"We obviously are pleading that this doesn’t go back to re-trial," he said.

The family is also concerned that new Lake County State’s Attorney Eric Rinehart may not defend the conviction, saying unlike previous state’s attorneys his office has not been returning their phone calls.

"This time we’re not feeling as comfortable," Thad said.

Rinehart disputes that, saying, "Our office has kept Rhoni’s brother, Thad, updated on all developments in this important case. Our focus will be to get justice for Rhoni."

"I completely understand why the Reuters would be concerned about re-opening old wounds," said Yang’s defense attorney, Jed Stone.

"Every State’s Attorney has a duty to the public to look at cases with fresh eyes," he said.

"I see it as a smokescreen and a last ditch attempt and legal Hail Mary to get her out of jail," brother Thad said.

The next hearing in the case is in May and a decision on a new trial for Yang could come as early as this summer.

See the full statement from the Reuter family below:

On October 4th, 2007, my sister Rhoni and her precious, unborn girl Skylar, were shot to death at their home in Deerfield. Both victims of a woman who wanted to eliminate them as rivals.

She first shot Rhoni twice in the abdomen to kill Skylar and then shot my sister in the back of her head. In that instant, my family’s 14-year journey through hell began and I fear another chapter could start any day.

Any crime victim or their family can tell you about the horror of dealing with such violence. Rhoni’s funeral was a blur. Our hearts were broken. We were numb. Loved ones and friends were in shock.  Rhoni’s killing overwhelmed all of us.

Detectives came to Rhoni’s funeral. They had no idea of who or what they were looking for but good cops will tell you the same thing. Cases can break on the smallest of clues. Clues shaped the police work. That work led to wiretaps which led to a taped confession which led to the arrest 17 months after the shooting.

The case led to national media attention because Rhoni and the woman had both dated Shaun Gayle, a former Chicago Bears football player and member of the storied ’85 Super Bowl team. Gayle was the father of Rhoni’s baby and the woman feared they could never be together while Rhoni and Skylar were in the picture.

The case was strong. Nearly four years after their death, the evidence would speak for Rhoni and Skylar, but this time in court. The jury took only three hours to convict her. She was guilty of both counts of murder and sentenced to two concurrent life terms. For the first time in a long while, we cried tears of relief instead of pain that evening.

To this day, I still cannot use the woman’s name who killed my sister and her unborn daughter but our years of waiting seemed finally over. Already convicted by a jury, the woman eventually  lost her appeal.  For the first time since Rhoni and Skylar’s death, we could breathe.

But now it’s starting all over again.

Perhaps you remember the 70’s film, Network? A fed up anchorman starts yelling, "I’m mad as hell and not going to take it anymore." He could not have expressed my family’s pain any better when we heard the news.

My mom got the first calls late last year from reporters asking about that woman who now  says she deserves a new trial. But why? The evidence supporting her conviction was and remains staggering.

To us, she dictated her own future when she confessed and now, almost ten years later she wants another chance?

No. No. No. It isn’t fair. Not to my sister and her baby. Not to my mom and my late dad. Not to any of us who loved Rhoni.

There is no such thing as "just another hearing." Allowing her out of prison even to go to court is another insult to my family.  Another hearing means tearing at my mom’s soul once more.  Enough is enough.

Mom lost her daughter and her granddaughter  just weeks before she was to be born. And the woman who caused this incomprehensible pain wants to defend her actions again?

Over the last two weeks, we have been talking to various media contacts about stepping out publicly in criticism of States Attorney Eric Rinehart. It is not a decision we made lightly.

Our biggest frustration has been the lack of communication from his office. We shared that impression with the media assuming someone would talk to Rinehart about it. They did.

Today (March 16th) Rinehart called for the first time since he took office. Or more exactly, one of his assistants called. He apologized for being out of touch and brought us up to speed on the case, which is a good thing.

There will be a hearing in Lake County court in mid-May when her lawyers will argue for the new trial in spite of the evidence. Like everyone else, we can only wait to see what happens.

So far,  the States Attorney’s office has said little publicly about a potential trial. We think they need to speak up and defend this righteous verdict which has already been upheld on appeal.

Please honor Rhoni and Skylar by openly supporting the verdict. They deserve justice.

(Thad Reuter is Rhoni’s younger brother and lives in Florida. Their older brother, Wayde, lives in Iowa. Their mom, Landa, is retired and lives in Wisconsin.)