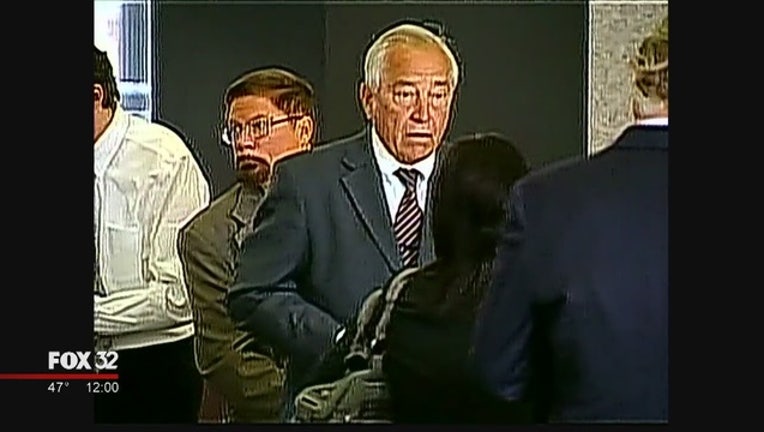 Vrdolyak, a onetime powerhouse 10th Ward politician, was quietly charged earlier this month in a 19-page federal indictment that outlined his role in a scheme to pocket millions from the $9.3 billion settlement reached in 1998. The indictment alleges that Vrodlyak was promised $65 million from the settlement even though he “did no work on the Tobacco Lawsuit.”

It’s not clear how much money Vrdolyak made from the settlement, but federal prosecutors told a judge in 2010 that Vrodlyak “has a guaranteed income stream of $260,000 per year . . . until 2023 from tobacco-related litigation.”

The indictment charges Vrdolyak, who turns 79 next month, with impeding the IRS and tax evasion. He faces a maximum of eight years in prison for allegedly trying to help his co-defendant, attorney Daniel Soso of Alsip, dodge federal income taxes.

He appeared at the federal courthouse Tuesday for arraignment, pleading not guilty in front of U.S. District Judge Amy St. Eve. Assistant U.S. Attorney Amarjeet Bhachu said during the hearing that prosecutors have more than 150,000 pages of evidence to turn over to Vrodlyak’s legal team.

St. Eve ordered Vrodlyak released on his own recognizance but she told him not to contact Soso or any lawyer or judge involved in the tobacco settlement in the 1990s. The judge also set a status hearing for Feb. 2, but Vrdolyak will not be required to appear.

Michael Monico, one of Vrdolyak’s defense attorneys, spoke to reporters in the courthouse lobby after Tuesday’s hearing, telling them “this case does not involve Mr. Vrdolyak’s tax returns” and calling the case “disturbing.”

But when asked how his client got a piece of the tobacco litigation, Monico said, “the case does not involve that.”

Monico then walked out of the building as he was pressed on the question.

Last week, Monico described the money as a “referral fee” and he said Vrodlyak has more than $250,000 in escrow waiting to be paid to the IRS.

A member of the City Council from 1971 to 1987, Vrdolyak earned the nickname “Fast Eddie” for his back-room deals and reputation for dancing on the edge of the law. A federal judge initially handed him a big break in 2009, giving him no prison time for his role in a financial scam with corrupt influence peddler Stuart Levine. But prosecutors appealed, and another judge ultimately sentenced Vrdolyak to 10 months in prison followed by 10 months of home confinement and work release.

The new indictment alleges Vrodlyak and Soso “were not appointed as Special Assistant Attorneys General” and were not authorized to represent the state of Illinois in the tobacco case. Illinois reaped $9.3 billion from the settlement, but it ultimately agreed to pay $188.5 million of that to outside law firms that helped with the litigation. Soso and Vrodlyak allegedly then struck a secret deal with Washington state attorney Steve Berman to collect a percentage of the fee.

The indictment does not identify Berman by name, and he is not charged in the case.

The deal evolved over time. But in May 1999, Berman allegedly sent Vrodlyak a letter on his firm’s letterhead indicating that Vrodlyak stood to collect $65 million. Vrdolyak soon agreed in writing to give a portion of it to Soso.

However, the feds say Soso was dodging taxes, and the IRS served Vrodlyak with a levy in 2005 and 2006 demanding Vrodlyak pay any money he owed to Soso to the IRS. Vrodlyak allegedly stopped paying Soso and told the IRS he owed Soso nothing.

Meanwhile, the feds say Vrdolyak and his law firm continued accepting money from Berman. Eventually, Soso asked Berman to pay him directly. Soso also allegedly hid that money in accounts belonging to his relatives and girlfriend.

Finally, in 2010 and 2011, the feds say Vrdolyak sent $170,242 to Soso and an unnamed recipient in connection with the tobacco settlement. That payment conflicted with Vrodlyak’s earlier statement that he owed Soso nothing.