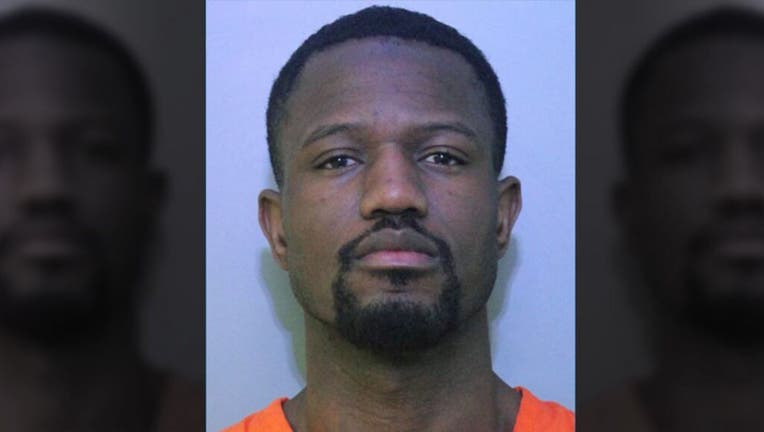 Evenaud Julmeus, 30, of Haines City, Fla., dropped off his son in front of a closed police department, according to an affidavit. (Haines City Police Department)

HAINES CITY, Fla. - A Florida father left his juvenile son on the side of the road because he thinks his son might be gay, according to police.

Evenaud Julmeus, 30, of Haines City, Fla., dropped the boy off in front of a closed police department, according to an affidavit, which stated that the child had a small duffel bag with several articles of clothing in it but did not have any food, water or money. The boy also did not have a phone with him, police said.

Julmeus told his son, whose age was redacted in the affidavit, to pack a duffel bag after he allegedly found male pornography videos on his cell phone, according to what the affidavit said the victim told police. Court records said Julmeus “became very upset” after he found the videos.

A bystander who witnessed the event called police. An officer dispatched to the location said the victim was very upset and crying, according to court records.

The victim told police that his father told him to pack a bag and that he was taking him to the police department where they would find him a new home, court records said.

Julmeus made his son get out of the vehicle while sitting in a turn lane on a Florida highway and then drove off, according to court records, which added that his father did not try to contact law enforcement to tell them he had dropped off his son.

After learning about what had happened, the boy’s mother went to go look for him at the police station, leaving her other two young children with Julmeus, the affidavit said.

Julmeus had fled the home before police arrived, leaving the two children alone, according to court records.

Julmeus left his juvenile son at “a closed police department with no one around, failing or omitting to provide the victim with care, supervision and services necessary to maintain physical or mental health while also failing to make a reasonable effort to protect the victim from abuse, neglect or exploitation of others,” the affidavit said.

He also allegedly neglected his two other children by leaving them alone at their home with no adult supervision or care, court records added.

Julmeus has been charged with three counts of negligent child abuse without bodily harm and turned himself in, police said, adding that he is still in custody.