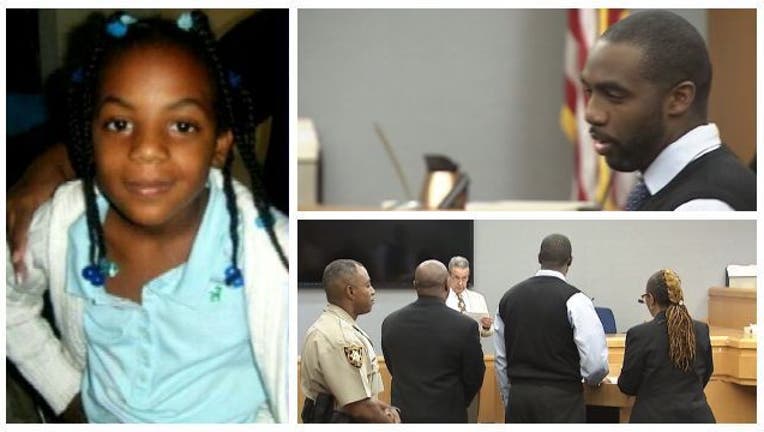 GWINNETT COUNTY, GA (WAGA) - A Gwinnett County man charged in the murder of his 10-year-old daughter was sentenced to life without parole Friday morning.

"I want you to know that he has made a terrible mistake and he is very sorry from the bottom of my heart," said Eman Moss.

Moss shared those words in open court Friday before he was sentenced to life in prison without parole. Moss read a letter of apology to the little girl he was supposed to protect from evil and rescue from harm's way. It was as much an admission of his profound failure as a father--as it was a father's tearful expression of sorrow and regret.

"The thing that causes me so much pain is that I cannot bring you back. I cannot kiss you. I cannot hold you. I can't tell you how much I love you and how sorry I am," Moss said as he stood before Judge George Hutchinson.

The little girl's family wept throughout the entire hearing.

Moss' tearful words come just weeks after he pleaded guilty to felony murder, child cruelty and concealing a death—a move he made to avoid a death sentence for allowing his first born child to starve for death, then burning her body in a trashcan after she died in November 2013. Gwinnett DA Danny Porter says the 10 year old weighed only 32 pounds when her tossed remains were discovered outside the couple's apartment. Moss and his wife Tiffany—who is not Emani's biological mother- were both charged with the heinous crime. Moss' attorney says the father chose not to take Emani to the hospital in the weeks before she died because Tiffany had previously been arrested for beating Emani.

"His wife was telling him 'we can't call police, we can't call 911, we can't take her to the hospital because we will lose our other children since DFACS is watching us'," defense attorney Lamar Christian said as he asked the judge for life with parole.

He and Mrs. Moss made a conscious decision every single day for an extended period of time to starve the girl to death, so it's good to see that he recognizes that, but it's obviously entirely too late for Emani," Deputy District Attorney Lisa Jones said after the sentencing hearing.

Moss is now poised to testify against the woman he claims starved his daughter while he was working two jobs. His lawyer says left home every day at 6 a.m. and tried to feed his daughter protein drinks when he returned at night. Mr. Christian say he was unaware of the abuse and starvation little Emani endured day after day until she died.

Prosecutors insist both are equally at fault even if one parent was the primary caregiver.  Jones says it's likely Mrs. Moss's death penalty case will not begin until later next year. She says Mrs. Moss has yet to give a statement to police or investigators about the horrible crime.