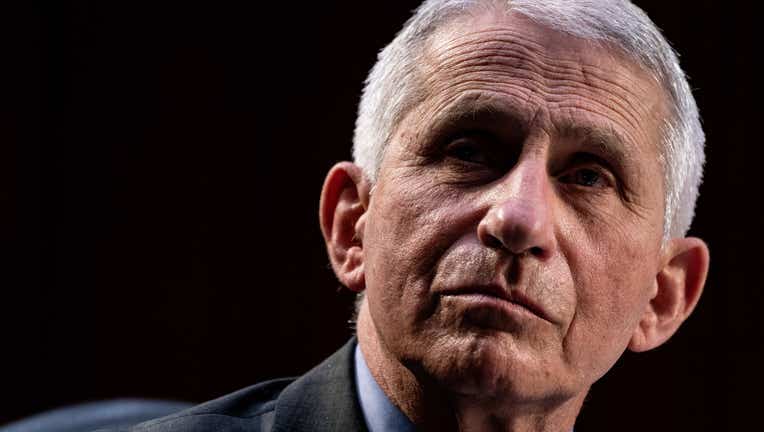 Dr. Anthony Fauci, Director at the National Institute Of Allergy and Infectious Diseases, speaks during a hearing with the Senate Committee on Health, Education, Labor, and Pensions, on the Covid-19 response, on Capitol Hill on March 18, 2021 in Wash

WASHINGTON - The government’s top infectious disease expert Dr. Anthony Fauci is warning the latest COVID-19 surge in Europe could be a sign of what’s to come in the U.S.

Fauci repeated his latest warning against pulling back on public health measures, saying the virus, and its variants could come surging back, endangering the goal of getting the country closer to normal by early July.

"The way we can counter [U.K. variant] 1.1.7, which is a growing threat in our country, is to do two things: to get as many people vaccinated as quickly and as expeditiously as possible with the vaccine that we know works against this variant and, finally, to implement the public health measures that we talk about all the time ... masking, physical distancing and avoiding congregant settings, particularly indoors," Fauci said this week.

The updated CDC guidelines, announced on March 19, signal the agency’s turn away from the 6-foot distancing recommendation.

He previously pointed to Europe as a cautionary tale. Rising virus cases this winter followed rollbacks on restrictions on the continent.

Tighter restrictions aimed at reining in surging coronavirus infections took hold in much of Italy and parts of Poland on Monday, while in France, Paris risks being slapped with a weekend lockdown as ICUs near saturation with COVID-19 patients.

Italy is imposing restrictions in certain regions where there are rising COVID-19 cases. In "red-zone" regions, restaurants and cafes can do only takeout or delivery. Meanwhile, nonessential shops are shuttered and residents must stick close to home, except for work, health or shopping for necessities.

The French government backed off Thursday from ordering a tough lockdown for Paris and several other regions despite an increasingly alarming situation at hospitals with a rise in the numbers of COVID-19 patients. Instead, the prime minister announced a patchwork of new restrictions while reducing the national curfew by one hour.

Hungary, meanwhile, extended lockdown restrictions for another week as a powerful surge breaks records each day — despite the fact that the country has the second-highest vaccination rate in the EU after Malta.

In Bosnia, which is not in the European Union, soaring infections prompted a lockdown taking effect in the capital on Friday. The Balkan nation of 3.3 million has yet to start mass vaccination of its citizens and has kept relaxed measures and ski resorts open throughout the winter season.

Spain has seen a huge drop in infections and deaths in nursing homes and a significant decline in overall deaths, following the first phase of its vaccination program.

Back in the U.S., health officials warned that states in the U.S. may be easing restrictions too quickly.

The head of the Centers for Disease Control and Prevention, Dr. Rochelle Walensky, urgently warned state officials and ordinary Americans not to let down their guard, saying she is "really worried about reports that more states are rolling back the exact public health measures that we have recommended."

Texas became the biggest state to lift its mask rule, joining a rapidly growing movement by governors and other leaders across the U.S. to loosen COVID-19 restrictions.

Massachusetts will move into the next phase of reopening starting Monday, with large sports venues allowed to open with 12% capacity. Gathering limits for event venues and in public settings will increase to 100 people indoors and 150 people outdoors, the administration said.

In Missouri, where individual communities get to make decisions, the two biggest metropolitan areas — St. Louis and Kansas City — are relaxing some measures.

Meanwhile, Iowa’s governor recently lifted mask requirements and limits on the number of people allowed in bars and restaurants, while the town of Lawrence, home to the University of Kansas, now allows establishments to stay open until midnight.

This Associated Press contributed to this report. This story was reported from Los Angeles.