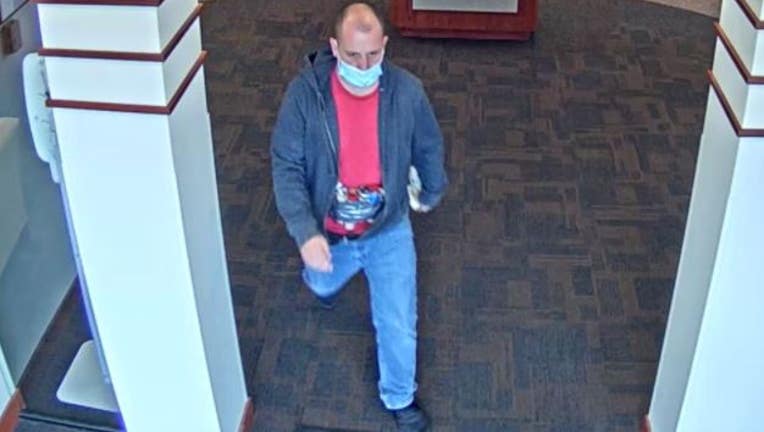 The FBI says Jason Bradley walked into a Lombard bank with sticks of fireworks taped around his waist Monday afternoon.

LOMBARD, Ill. - With sticks of Airborne Troop Parachute fireworks duct-taped around his waist, Jason Bradley walked into West Suburban Bank in Lombard and handed a teller a note Monday afternoon.

"I need everything from your drawer or WE ALL DIE!!!" read the note on pink paper, according to the FBI.

He unzipped his sweatshirt and showed the string of fireworks with black wires sticking out.

A teller dispensed $800 in marked bills and handed it over. After ditching his car in Elmhurst and walking to his home in Villa Park, Bradley texted his wife a picture of him holding a stack of cash, the FBI said.

"Nobody has been looking for me?" he asked. "Nothing? Wtf?"

Bradley went out for a smoke and was promptly arrested by FBI agents, who had been watching his home for hours.

They found $747 in cash on him and, inside the house, duct tape, a pink notepad and a bag of fireworks that warned, "Shoots flaming balls."

Bradley was charged with bank robbery.

The FBI said it began tracking Bradley within minutes of him walking out of the bank at 707 N. Main St. in Lombard around 1:15 p.m. Monday.

Even though his face was partially hidden by a blue surgical mask, Bradley wore no gloves and walked straight to his silver Chevy Cruze in a nearby parking lot, the FBI said.

Within 45 minutes, authorities had tracked the plate from surveillance video and FBI agents were outside his home, the agency said.

It was not until hours later, around 4:30 p.m., that Bradley arrived. Agents arrested him around 6:40 p.m. when he stepped outside for a cigarette, the FBI said.

His wife gave the agency permission to search the home and also forwarded the texts, the agency said in an affidavit.