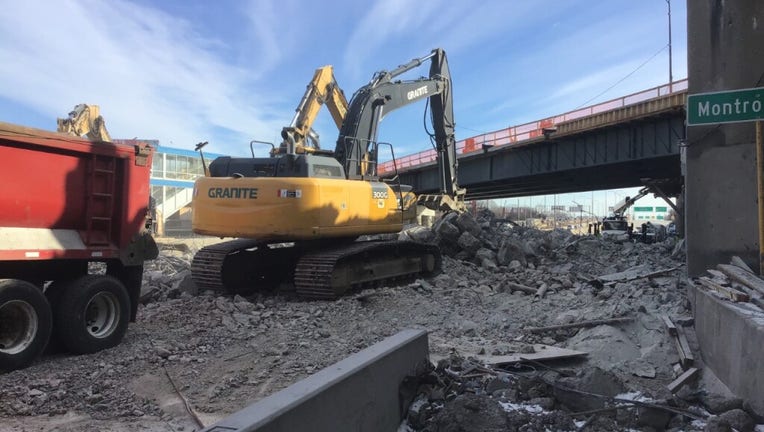 CHICAGO - The final portion of the Montrose Avenue bridge over the Kennedy Expressway is set to be removed starting this Friday.

The construction, which snarled traffic on the Kennedy weeks ago, will start at 10 p.m. March 26, resulting in lane closures and expressway stops overnight throughout the weekend, according to the Illinois Department of Transportation.

All inbound traffic on the Kennedy will be rerouted to the express lanes by midnight, and vehicles will not be able to exit until Armitage Avenue.

Most lanes will be reopened by 10 a.m. Saturday and Sunday with the exception of the left lane in both directions, which will be closed throughout the weekend, IDOT said. All lanes should be clear by 5 a.m. Monday.

The construction will include full traffic stops in the inbound lanes that will start at 1 a.m. each morning, and are not expected to last longer than 15 minutes at a time, IDOT said.

The outbound exit ramp to Montrose Avenue will close at noon on Friday as crews prepare for construction, and will remain closed until 3 p.m. Tuesday, IDOT said.

The improvement project, which includes a replacement of the bridge along with upgrades to lighting in the area, is expected to be completed this summer.