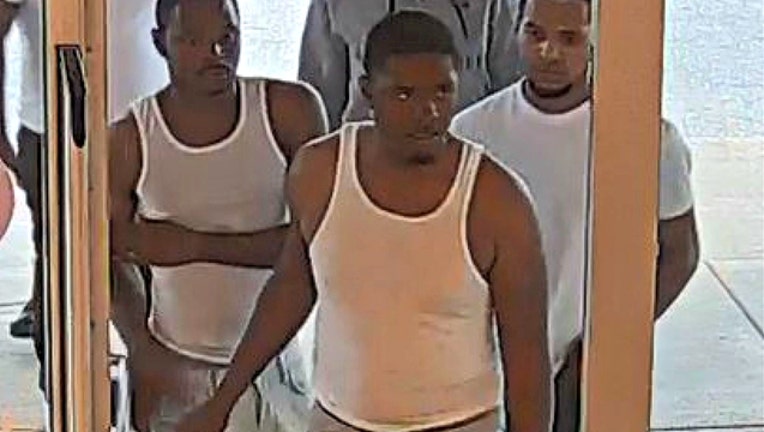 Police are still searching for the suspects — who they say are possibly connected to another outlet mall case nearby -- and released pictures of the men on July 4. (Pleasant Prairie Police Department)

Wisconsin police are searching for 10 young men who they say were part of a 'flash mob' group accused of stealing $30,000 in merchandise this week from a North Face outlet, all in under 30 seconds — and captured on surveillance footage.

The camera footage shows a group of men entering the store around 7:45 p.m. Monday and then abruptly scurrying through several racks of outerwear and clothing, in footage released by the Pleasant Prairie Police Department.

The crew fled the store after about 20 or 30 seconds, after grabbing “as much merchandise as they could carry before running to the cars and leaving the property,” Sgt. Aaron Schaffer of the Pleasant Prairie Police Department told Kenosha News.

The group appeared to be a “flash mob," Schaffer added.

The store's security footage captured the faces of the suspects.

According to authorities, the men fled the scene in three vehicles: a maroon Pontiac Grand Prix, a Dodge Magnum and a car described as either a Chevrolet Cobalt or a Pontiac.

Police are still searching for the suspects — who they say are possibly connected to another outlet mall case nearby -- and released pictures of the men on July 4.

This incident remains under investigation and anyone with information is asked to call local police at 262-694-7353.