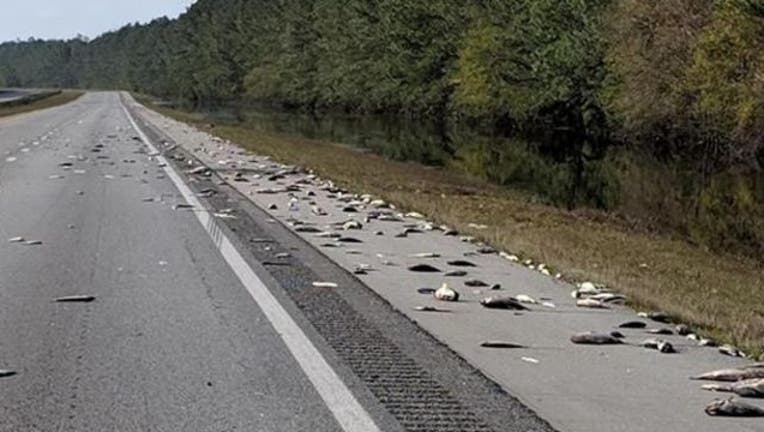 Dead fish can be seen along the Interstate 40 in North Carolina where floodwaters from Hurricane Florence have receded.(Penderlea Fire Department)

FOX News -- Floodwaters from Hurricane Florence are leaving quite a fishy situation in North Carolina.

As floodwaters from the hurricane begin to recede more a week after the storm made landfall, first responders on Saturday came across hundreds of dead fish on a stretch of Interstate 40 that had been hit hard by flooding.

"Well, we can add 'washing fish off of the interstate' to the long list of interesting things firefighters get to experience!" the Penderlea Fire Department said in a Facebook post.

The fish were discovered along a stretch of the interstate near Wallace, located about 40 miles northwest of Wilmington, where the storm made landfall.

"Hurricane Florence caused massive flooding in our area and allowed the fish to travel far from their natural habitat, stranding them on the interstate when waters receded," the fire department said.

An employee from the North Carolina Department of Transportation also posted pictures, showing the fish strewn along the shoulder of the highway.

On Saturday, North Carolina Gov. Roy Cooper said nine of the state's river gauges are at major flood stage and four others are at moderate stage, while parts of Interstates 95 and 40 will remain under water for another week or more.

Emergency management officials said residents whose homes were damaged or destroyed will begin moving into hotel rooms next week. A FEMA coordinator told the Associated Press that as of Saturday, about 69,000 people from North Carolina have registered for assistance.

The storm has claimed at least 43 lives since slamming the region with prolonged, heavy rainfall.

"Hurricane Florence has deeply wounded our state, wounds that will not fade soon as the flood waters finally recede," Cooper said.

In Wilmington, which had been cut off by floodwaters, officials said they have identified three safe routes into town. They encouraged people to avoid travel in areas where the risk of flooding remains.

In neighboring South Carolina, new evacuations were ordered as the town of Nichols was completely inundated by water. Mayor Lawson Batter told the AP that the storm was "worse than Matthew," which destroyed almost 90 percent of the town's 261 homes in 2016.

"It's just a mess," he said. "We will try everything we can to come back ... but we need to have federal and state help."