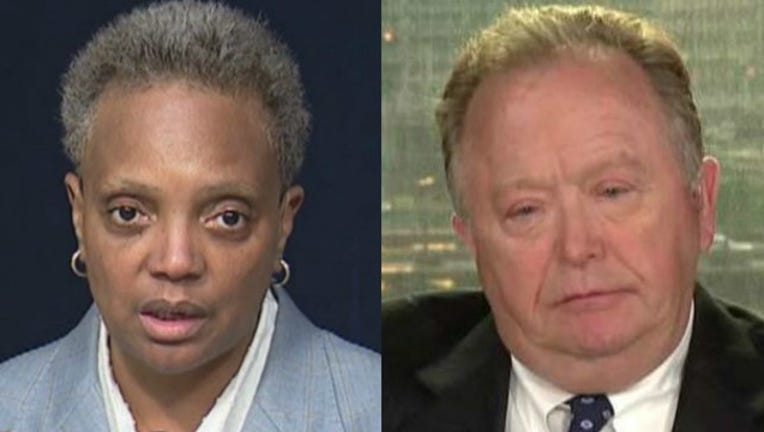 (FoxNews.com) - A Chicago police union leader said Friday that Mayor Lori Lightfoot owes everyone an apology after she was caught on a hot mic insulting him at a city council meeting earlier this week.

Appearing on "Fox & Friends," Patrick Murray, the vice president of Chicago's Fraternal Order of Police (FOP) said Lightfoot and the FOP are not known to get along.

Murray explained that he attended the meeting to defend four officers who were fired by the police board for their involvement in the Laquan McDonald shooting.

As he got up to speak, Lightfoot could be heard saying, “oh, back again, this is this FOP clown."

Murray said he didn't immediately hear the remarks, and it only came to his attention after he finished speaking.

The mayor later apologized at a press conference and said she "should not have made the remarks out loud."

"That's not an apology," said Murray.

"I think she owes an apology to everyone that comes down to talk to the city council, all the citizens that live in Chicago and the police officers I represent."

He explained that his job is round-the-clock, going to trials, crime scenes, and hospitals when an officer is injured on the job.

"Fox & Friends" host Ainsley Earhardt thanked Murray for his service, recognizing the "hard work and long hours" officers around the country invest to protect their communities.

"If you're home alone and your alarm goes off, or if someone comes to your house and you don't feel safe, who do you call? You call a police officer. They're there to protect you, protect your kids and make sure they are safe. It is terrifying if you've ever been in that situation," she said.

As an officer of 29 years, Murray said his position gives him the opportunity to represent those in different communities across Chicago.

Lightfoot, who took office in May, criticized the city's police department earlier this month, as the city continues to experience more homicides than New York and Los Angeles.

“One weekend does not make a trend,” Lightfoot said, according to Fox 32. “But we've now had a couple weekends where it feels like we are losing the streets.”

FOP President Kevin Graham told Fox News that 1,500 officers gave up their holiday to help patrol the streets on the Fourth of July weekend, leading to a reduction in shootings compared to the past few years. Graham said officers continue to work without a long-term contract and more officers must be hired.