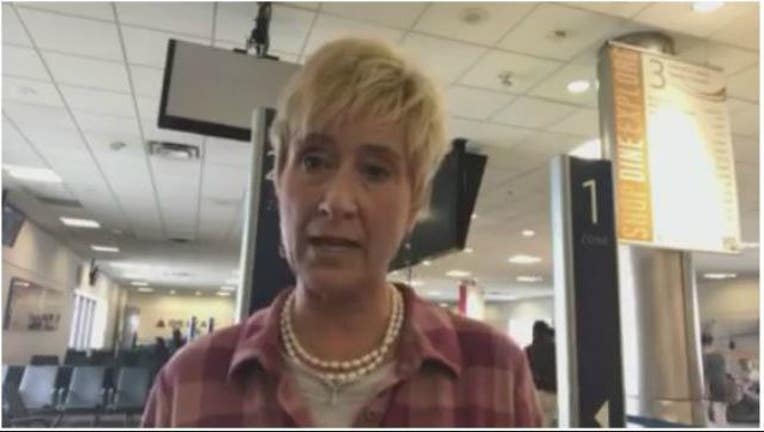 ATLANTA - A Georgia woman says a Delta flight attendant prevented passengers on her flight from singing the National Anthem as crews unloaded the casket of a fallen soldier at Atlanta's airport over the weekend.

Pamela Dee Gaudry said when she learned the body of Army Staff Sgt. Dustin Wright was on her flight, she decided to ask fellow passengers if they would join her in singing the National Anthem as a show of respect. The 29-year-old special forces soldier was among four U.S. troops killed in an attack in Niger on Oct. 4.

"I thought it would be so amazing if we sang as they were getting off," Gaudry said. "It's a great honor to the boy's parents, wife and perhaps children."

Gaudry, the wife of a deceased Army captain, said she went around to every seat, asking others if they would like to join her in singing. Some people were thrilled, but others simply declined to participate.

As the flight was about to descend, Gaudry said the chief flight attendant came up to her and said it was against Delta's policy to sing the National Anthem. Gaudry said the staff then made an announcement telling everyone to stay in their seats and remain quiet.

"I'm humiliated by my lack of courage to sing the national anthem in my own country on American soil, with a deceased soldier on the plane. I wish I could have been an example for my children," Gaudry said. "I’m glad my former husband is deceased because he would have been profoundly disappointed in me."

Gaudry said many people on her flight were upset. She said the flight attendant told her there were people on the flight from other countries and may be offended by them singing the National Anthem.

"All we can do is pray," one passenger told her.

Gaudry took to Facebook once her flight landed at Hartsfield-Jackson International Airport and shared a video, explaining what had just taken place. The video has garnered thousands of views.

Gaudry later said Delta contacted her about her flight, apologizing and explaining the flight attendant had been misinformed. Delta said it wasn't company policy to prevent passengers from singing the National Anthem.

"Evidently, they had a flight attendant that made some bad decisions in trying to make this situation go away. They are going to do some training for the future," she said. "Delta was very reverent and let the honor guards do a wonderful thing to honor each and every soldier that comes home with this beautiful tribute. For just this reason, I personally do not believe in a boycott of Delta."

Gaudry also said Dustin Wright's family reached out to her after her Facebook video went viral, and thanked her.

"Delta has apologized to me. Profusely. I accept. Like many things in life...it should have been handled differently. I am not throwing any stones"