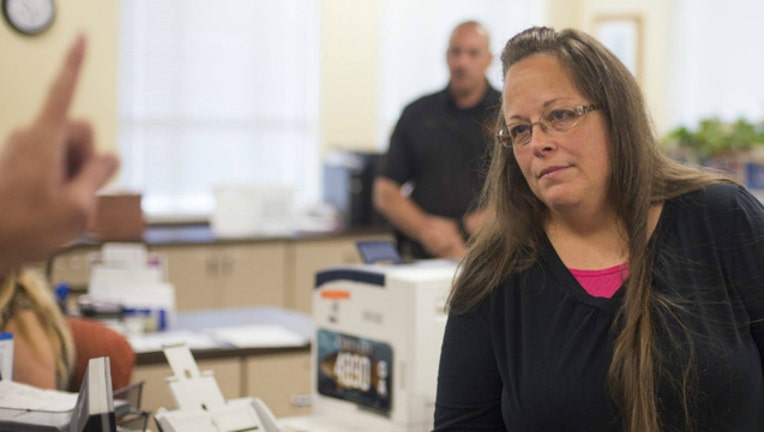 MOREHEAD, Ky. (AP) - David Ermold returned to the Rowan County courthouse Wednesday, nearly two years after Clerk Kim Davis refused to give him a marriage license because he was gay.

Only this time, he did not want a license. He wants Davis' job.

Ermold filed to run for county clerk on Wednesday, hoping to challenge the woman who two years ago told him "God's authority" prohibited her from complying with a U.S. Supreme Court decision that effectively legalized gay marriage nationwide. Ermold and others sued her, and Davis would spend five days in jail for disobeying a federal judge's order. She emerged to a rapturous rally on the jailhouse lawn, arm-in-arm with a Republican presidential candidate as a newly crowned martyr for some conservatives.

In the two years since then, things have quieted down in this Appalachian town previously known for a college basketball team at Morehead State University that occasionally qualifies for the NCAA tournament. Last month, Davis announced she would run for re-election and face voters for the first time since refusing to issue marriage licenses. Three other people have also filed to run against her, including Elwood Caudill Jr., who lost to Davis by just 23 votes in the 2014 Democratic primary.

But Caudill, like many people in Morehead, doesn't want to talk about Davis and gay marriage. Ermold does.

"I think we need to deal with the circumstances and the consequences of what happened," Ermold said. "I don't think the other candidates are looking at a larger message. I have an obligation here, really, to do this and to set things right."

Wednesday, Ermold and his husband sat across a desk from Davis as they filed his paperwork to run for office. Davis smiled and welcomed them, chatting with them about the state retirement system and the upcoming Christmas holiday. She made sure Ermold had all of his paperwork and signatures to file for office, softly humming the old hymn "Jesus Paid It All" as her fingers clacked across a keyboard.

When it was over, she stood and shook hands with Ermold, telling him: "May the best candidate win."

"It'll be a good one, I'm sure," Davis told reporters about the election. Asked if she thought she deserved to be re-elected, Davis said: "That will be up to the people. I think I do a good job."

Davis doesn't object to issuing marriage licenses now that the state Legislature has changed the law so her name is not on the license. She has been in the clerk's office for nearly three decades, most of that time working for her mother until she retired. Davis was elected in 2014 as a Democrat. But after same-sex marriage became legal, the state's then-Democratic governor refused to issue an executive order to remove the names of clerks from marriage licenses. Davis said she felt betrayed by her party and switched her registration to Republican.

Davis' new political party could be a problem in Rowan County. While Republican Donald Trump overwhelmingly won the county during the 2016 presidential election, nearly all of the local elected officials are Democrats and always have been.

Tim Keeton, a 56-year-old retired nurse, said he has not decided who he would vote for in the election next year. He said Davis does a good job as clerk, but said he was troubled by her decision not to issue the marriage licenses.

"I think it just blew up and put us in a bad light in a lot of ways," he said.

Ermold's candidacy has already attracted some national attention. Patton Oswalt, the comedian and actor, sent Ermold a tweet on Wednesday asking: "Anything I can do to help?"

Ermold grew up in the suburbs of Philadelphia and came to Kentucky 19 years ago to be with his boyfriend, now husband, David Moore. He has two master's degrees, one in English and the other in communications, and teaches English at the University of Pikeville. He says he is more than qualified to run the office, which keeps track of the county's records including real estate transactions and car registrations.

And he said his campaign won't focus solely on the LGBT rights. He said he is tired of the "divide and conquer" style of politics that has come to dominate most elections, where candidates purposefully take stances to energize some voters while angering everyone else.

"People ... are back home bickering and fighting with each other and fighting on social media," he said. "This campaign we are putting together is about unity and bringing people together and restoring fairness."