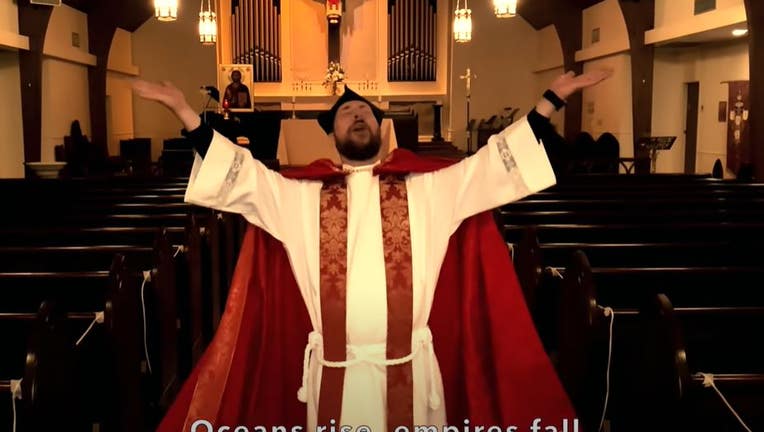 Rev. Lonny Lacy performing his “You’ll Be Back“ parody from the hit Broadway musical, ”Hamilton.“

A Georgia priest looking for a way amid the COVID-19 pandemic to encourage his parishioners to keep the faith until they can return to the church turned to Broadway for inspiration.

Rev. Lonnie Lacy, a priest at St. Anne’s Episcopal Church in Tifton, Georgia, decided to create a video letting his congregation know that, despite the COVID-19 pandemic that continues throughout the United States, it won’t be too long until they can come together again to worship.

According to a blog post titled “Behind the Hamilton Video,” Lacy detailed how the idea for the video was originally meant to entertain church members during their annual talent show, which was canceled due to the pandemic. But beyond entertainment, Lacy said church-goers just missed seeing each other.

“It was for our annual church talent show, which brings a lot of laughter to our congregation and is typically used to raise funds for our sister church in the Dominican Republic,” Lacy wrote. “We look forward to it every year, and I’m known for providing the over-the-top finales. Go big or go home, right? This year it was cancelled, so we went virtual. No fundraising, just an opportunity to laugh and feel like a parish family again. We hadn’t worshiped in person together in 20 weeks, and we miss each other desperately.”

Lacy explained how he was a big fan of the musical and did not fail to mention his excitement when he finally snagged tickets to go see the show at the Fox Theater in Atlanta.

Unfortunately, the pandemic shut down the production and Lacy, along with his family, resorted to watching “Hamilton” on Disney+, but they were not disappointed.

“So like most of America, we watched it for the first time on July 3 via Disney+. And Lordy. That was that. We were done in. Helpless,” Lacy continued.

As for the reason why Lacy decided to parody “You’ll Be Back,” despite the fact that the song and performance by Jonathan Groff made him laugh hysterically, Lacy said he had an “aha” moment.

“Something clicked, and I thought, ‘Yes! King George means that as a threat, but for us who miss the joy of in-person worship, ‘You’ll be back,’ is exactly the promise we need to hear.‘ I knew immediately what I wanted to do for my church talent show,” Lacy wrote.

Another compelling reason Lacy decided to parody “You’ll Be Back” was the fact that he had robes that perfectly exuded the vibes he was going for.

“Plus, I have a fancy-shmancy red cope (the cape-like vestment worn on special church occasions), so pulling off a slightly George-esque ecclesiastical look seemed meant to be,” he added.

The endeavor took Lacy a full week to create, including writing the parody lyrics, creating a storyboard and editing and recording the vocals.

“I wrote the parody lyrics and story-boarded a shot-by-shot vision for it in an afternoon,” Lacy regaled. “The hardest part was recording and editing the vocals. Folks have complimented my voice (really gang?), but this project painfully revealed to me that I am not a soloist. Thank God for autotune in GarageBand. Hours of autotuning. Hours.”

The editing process came with one speed bump: Lacy’s work computer crashed just as he was finishing his project.

“Everything came together in iMovie on my work computer, which crashed, by the way, right as I was finishing. No joke,” he wrote. “It’s dead. This project killed my trusty workhorse of a computer, which, to be fair, was seven years old. Sign from God? You tell me. I’ve heard from a lot of clergy whose computers are crashing because of all the video work they’re having to do these days.”

Lacy used an iPhone, a tripod and a ring light to capture the magic.

“I’ve received countless emails. Lots of humor, lots of gratitude. But also a lot of folks baring their souls,” Lacy wrote in the blog post. “There was a pastor who said he’d been on the verge of losing his faith because of the wear and tear of the pandemic on his psyche, but now thought he’d give it another go. A mom who’d walked away from the Church but who now wonders if God is calling her and her family back in. Dozens of people who are just outright depressed and lonely, but who perked up–even if momentarily–when a goofball priest with a song and dance routine reminded them that God is alive and well and will bring us through this, one way or another.”

Lacy’s lasting lesson from this entire experience is a hopeful one: “I’ve learned that hope and joy are two of the most powerful forces we have at our disposal. Though they seem to be in short supply, they are readily, easily summoned.”

While many have reached out to Lacy about how funny, encouraging and delightful his video has been, one question still remains: Has anyone from Hamilton reached out to him?

Lacy said no, and he is not holding his breath, but he did have a message for the cast and creator:

“But . . . Lin-Manuel? Groffsauce? If you’re out there, thank you for the gift of your contagious joy.”