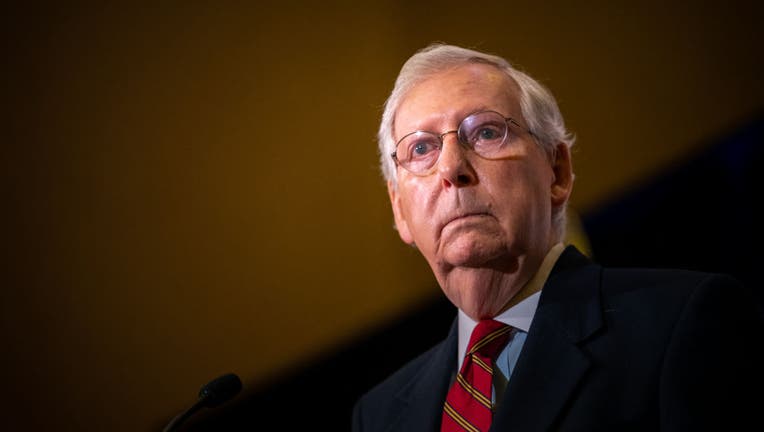 Several GOP Senators were bombarded with dozens of bodybags at their homes on Tuesday by angry protesters pushing for COVID-19 relief after months of gridlock over negotiations in Congress.

Activists hauled the black body bags out of the back of a rented truck and lined them up in front of the Washington residences of Republican Sens. Mitch McConnell, Susan Collins, James Inhofe, and Lindsey Graham.

Many of the bags were tagged with white signs that said "Trump COVID Death" and were meant to symbolize the more than 270,000 people who have died in the United States as a result of the pandemic.

"GOP senators led by Senate Majority Leader Mitch McConnell have been blocking House-passed COVID relief for months," the SPACEs In Action group said in a post on Twitter. "Today we brought the bodies to their doorsteps."

"May I suggest they try sharing their concerns with Speaker Pelosi or Sen. Schumer? They are the ones holding up relief – not Sen. Inhofe," the spokesperson said.

The dramatic display on a cold, rainy day in the nation's capital comes as lawmakers announced a $908 billion bipartisan agreement to stave off another economic shutdown as coronavirus cases skyrocket across the nation and unemployment claims continue to climb rapidly.

The agreement -- backed by 10 senators and endorsed by the House Problem Solvers Caucus, a 50-member bipartisan group that's evenly divided between Republicans and Democrats -- allocates about $300 billion in funding for small businesses through the Paycheck Protection Program, $240 billion in aid for state and local governments, $180 billion to extend boosted unemployment benefits at $300 per week for four months and a temporary moratorium on COVID liability lawsuits to allow states enough time to design their own laws. It notably does not include a second stimulus check, a major pain point for Democrats.

Meanwhile, McConnell struck down the effort by his colleagues earlier in the day and said he is more focused on putting forth a GOP COVID relief effort that will be signed into law by President Trump, adding that he has spoken to Treasury Secretary Steven Mnuchin to get an idea of what that may look like.

With just seven legislative days left on their calendar, it's unclear whether lawmakers will be able to reach an agreement before the year's end.

Government funding ends on Dec. 11 at 11:59 p.m., and Congress must pass a new spending bill to avert another shutdown.

McConnell, the Senate Majority Leader, has squabbled endlessly with his Democratic colleagues, who have accused him of taking a partisan approach and pandering to President Trump instead of passing comprehensive aid to tackle the mounting joblessness and health concerns Americans are facing as a result of prolonged lockdowns and coronavirus restrictions.