A federal grand jury indicted all four former Minneapolis police officers with violating George Floyd's civil rights during his deadly arrest. Derek Chauvin was charged in a separate indictment for a 2017 incident in which he is accused of holding a 14-year-old boy down by the throat and striking the child multiple times in the head with a flashlight.

MINNEAPOLIS (FOX 9) - A federal grand jury has indicted the four former Minneapolis police officers involved in George Floyd’s death on charges they violated his constitutional rights during the deadly arrest.

The three-count indictment charges Derek Chauvin, 45; Tou Thao, 35; J. Alexander Kueng, 27; and Thomas Lane, 38, with federal civil rights crimes for their roles in Floyd’s May 25, 2020 death. Lane, Thao and Kueng appeared via videoconference in U.S. District Court in Minneapolis Friday morning. Chauvin was not part of the court appearance.

Legal expert Lee Hutton explains what the new federal charges mean for the four ex-officers involved in the death of George Floyd.

Chauvin is charged with violating Floyd’s right to be free of unreasonable force by a police officer when he pressed his left knee on Floyd’s neck and held his right knee on Floyd’s back and arm as Floyd lay on the ground, handcuffed and not resisting, and continued to do even after Floyd became unresponsive.

Thao and Kueng are charged with violating Floyd’s right to be free from unreasonable seizure and excessive force. The indictment alleges the officers were aware that Chauvin was pressing his knee to Floyd’s neck while he was handcuffed and not resisting, and that he continued to do so even after Floyd became unresponsive, but they "willfully failed to intervene to stop [Chauvin’s] use of unreasonable force."

All four officers are charged for failing to provide medical care to Floyd. The indictment states the officers saw Floyd "lying on the ground in clear need of medical care, and willfully failed" to aid him.

Chauvin was also charged in a second indictment for a 2017 incident involving the neck restraint of a 14-year-old boy. The two-count indictment alleges Chauvin violated the teenager’s right to be free from the use of unreasonable force by a police officer when he held the teenager by the throat and struck him multiple times in the head with a flashlight.

The charges announced Friday are separate from the Justice Department’s civil investigation into the patterns and practices of the Minneapolis Police Department, which Attorney General Merrick Garland announced last month.

The charges are also separate from, and in addition to, the state charges Thao, Kueng and Lane are facing for their roles in Floyd’s death. All three former officers are charged with aiding and abetting second-degree murder and manslaughter and will be tried together this summer. 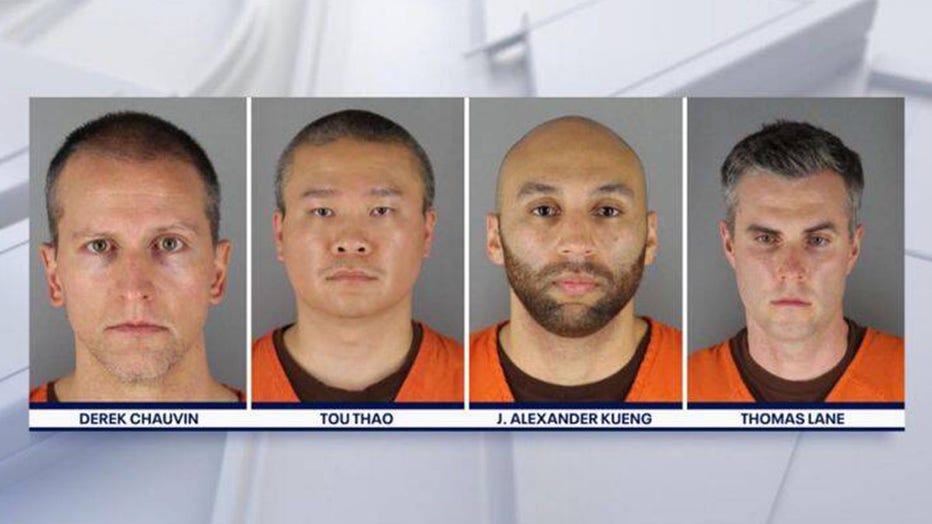 Last month, a Hennepin County jury convicted Chauvin of second-degree murder, third-degree murder and second-degree manslaughter in Floyd’s death. He is currently in custody at the state prison in Oak Park Heights, Minnesota’s only maximum security facility, while he awaits his sentencing next month. The other three officers are out on bond until their trial and remain free after Friday’s federal court appearance.

Chauvin’s attorney, Eric Nelson, filed a motion this week to have Chauvin’s guilty verdicts thrown out and a new trial scheduled, citing jury intimidation and a failure of the court to sequester the jury, among other issues.

Floyd, 46, died on May 25, 2020 after Chauvin pinned him to the ground and pressed his knee on his neck, even as Floyd, who was handcuffed, repeatedly cried out that he could not breathe. Kueng and Lane also helped restrain Floyd, while Thao held back bystanders and kept them from intervening during the over 9-minute-long restraint.