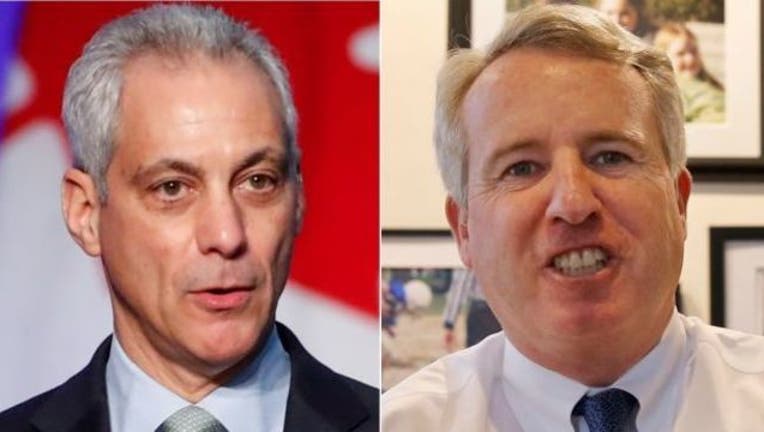 Chicago's Rahm Emanuel, left, was criticized by Chris Kennedy, who is running for the state's gubernatorial nomination.

CHICAGO (AP) - Few people running for public office have been more personally affected by gun violence than Chris Kennedy, who was a child when his father and uncle, Sen. Robert Kennedy and President John F. Kennedy, were assassinated.

Now the 54-year-old Democrat has made the issue a centerpiece of his campaign for Illinois governor, talking often about growing up without a father and family trips to Arlington National Cemetery, and saying too many people in Chicago and elsewhere in Illinois are dealing with the same kind of pain.

The move has brought endorsements from African-American leaders, including U.S. Reps. Bobby Rush and Danny Davis, and could help Kennedy earn support in the March primary from black voters who have been disproportionately hurt by gun violence.

But it's also put him at odds with Chicago Mayor Rahm Emanuel and some others and prompted accusations of race baiting, after Kennedy said much of the violence is due to systemic disinvestment in black neighborhoods. He accused Emanuel, the former White House chief of staff, of pushing black people out of the city through a "strategic gentrification plan" that includes cutting funding for police and public schools.

"Our government needs to be held accountable for subjecting our communities to a life of crimes of survival," Kennedy told supporters. "We can reduce and control gun violence in our communities, but we need to be honest with ourselves about why it's happening."

Emanuel called the comments "hallucinatory" and said he would like to hear "ideas, not insults," while a mayoral spokesman said it was "a direct assault on one of this city's greatest strengths - our diversity."

Kennedy's other critics, including campaign rivals, called the comment hypocritical, noting he was praising Emanuel not long ago and even donated $5,000 to his campaign. The Chicago Tribune, in an editorial, called it "a cynical and divisive pitch for votes."

Kennedy is one of six Democrats seeking the party's nomination March 20 for the chance to unseat first-term Gov. Bruce Rauner, who's widely considered one of the most vulnerable Republican incumbents up for re-election this fall. Among the other Democrats running are state Sen. Daniel Biss and billionaire businessman J.B. Pritzker, who's scooped up endorsements from Democratic county officials and major unions, including the Illinois Education Association.

Rush and Davis, who have both lost family members to the city's violence, said they're backing Kennedy because he's put violence prevention and gun control at the top of his agenda.

Speaking at a campaign event this month at a church in a west side Chicago neighborhood where homicides have spiked in recent years, Rush said it was "the first time in my lifetime" Illinois has a gubernatorial candidate who knows how violence rips apart a family and a community. Kennedy's father was killed as he ran for president in 1968, years after John F. Kennedy's assassination.

"He understands. He gets it," Rush said. "We don't have to sit down and go over violence."

Joining them was Nate Pendleton, whose 15-year-old daughter, Hadiya, was shot and killed days after returning from President Barack Obama's 2013 inauguration, and Kennedy's running mate, Ra Joy, whose 23-year-old son was fatally shot last summer, apparently by someone trying to steal his cellphone.

Chicago police recorded 650 homicides in 2017, down from the year before but still more killings than in New York City and Los Angeles combined.

Kennedy criticized Chicago officials for celebrating the decrease. He said the city is using a strategy of "selective containment" in which violence is allowed to continue in certain neighborhoods and minorities are pushed out Chicago, making the city "whiter."

He says his plan to reduce violence would include more investment in neighborhoods, reducing poverty and tougher gun control measures - an approach similar to that of his opponents.

Emanuel said he has worked to reverse the decline in the city's black population and reduce violence across Chicago.

Sign up for the AP's weekly newsletter showcasing our best reporting from the Midwest and Texas: http://apne.ws/2u1RMfv