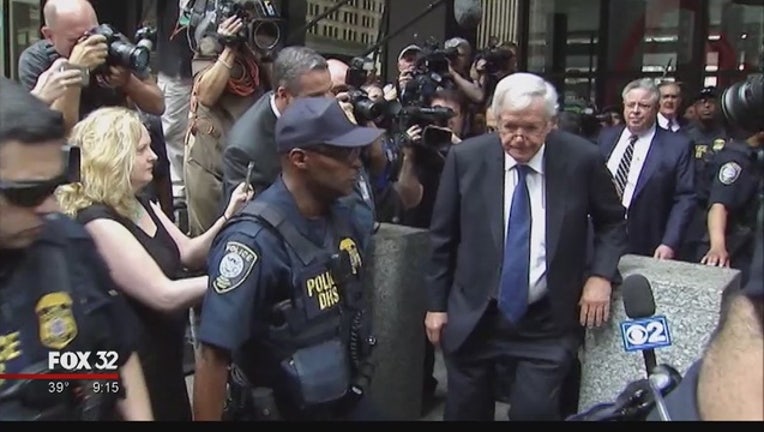 CHICAGO (AP) - Dennis Hastert's lawyers asked a federal judge Wednesday to spare the former U.S. House Speaker time behind bars in his hush-money case and sentence him to probation, saying the 74-year-old has already paid a steep price in shame and disgrace.

A filing in federal court in Chicago — where the Illinois Republican is scheduled for sentencing on April 27 — says Hastert "apologizes for his misconduct that occurred decades ago" and is "overwhelmed by the guilt." Notably, it contains no detail about that misconduct. Attorneys and the judge spoke recently about someone possibly testifying at sentencing who says Hastert sexually abused him years ago.

"Mr. Hastert's fall from grace has been swift and devastating," the filing says. "He knows that, for the rest of his life, wherever he goes, the public warmth and affection that he previously received will be replaced by hostility and isolation."

It highlights the removal of his portrait from the U.S. Capitol and the elimination of his name from public landmarks, saying: "Mr. Hastert has been stung by the public repudiations of him that followed his indictment."

The document also cites a list of ailments, some of which stem from his hospitalization days after he pleaded guilty on Oct. 28 to violating bank structuring laws as he sought to pay $3.5 million to ensure an "Individual A" stayed quiet about past misconduct by Hastert against Individual A. The misconduct dated back decades to around the time Hastert was a high school wrestling coach.

Hastert's legal team says he nearly died from a severe blood infection that spread to his spine in November. The filing seems to seek sympathy at several points, including by suggesting Hastert's health issues were brought on by legal ones.

"He will stand before the court having deteriorated both physically and emotionally, undoubtedly in part due to public shaming and humiliation of an unprecedented degree," it says.

Hastert's plea agreement says he managed to pay $1.7 million to Individual A — at $100,000 cash payments at a time — and it calls for a sentence of no more than six months in prison. Prosecutors are expected to push for at least some prison time when they file their own sentencing memorandum. The statuary maximum for the one count Hastert pleaded guilty to is five years in prison.

The latest Hastert filing steps around the issue of what underlying acts the money was designed to cover up.

"He regrets that he resorted to structuring the withdrawal of his money from banks in an effort to prevent the disclosure of that misconduct," the memo says.

It also refers to Hastert's political career, which ended when he retired from Congress in 2007 after eight years as speaker. "Mr. Hastert," it says, "is more than his past mistakes."

The Associated Press and other media outlets, citing anonymous sources, previously reported that Hastert wanted to hide claims he sexually molested someone, but the issue hadn't been raised in unsealed filings or in court until a hearing last month. At that hearing, an assistant U.S. attorney told the judge prosecutors only recently learned an "Individual D" is an alleged victim and was leaning toward testifying at sentencing. A sister of another alleged victim told prosecutors she wants to testify, attorneys said.