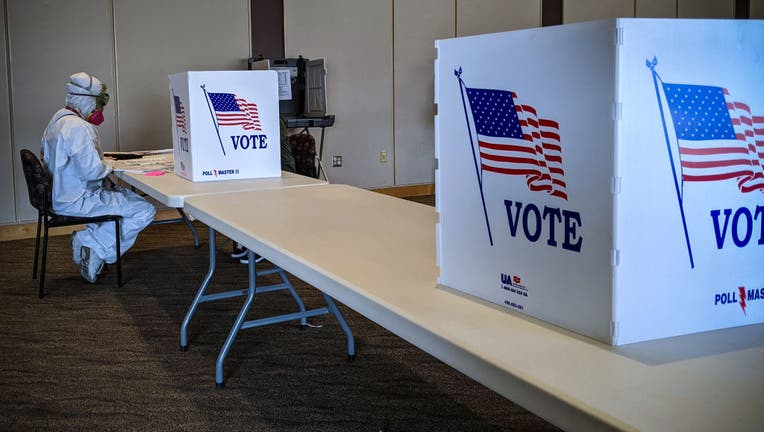 Elections Chief Inspector Mary Magdalen Moser runs a polling location in Kenosha, Wisconsin, in full hazmat gear as the Wisconsin primary kicks off despite the coronavirus pandemics on April 7, 2020. A new poll suggested that support for mail-in voti

Governments across the country are scrambling to find people to staff polling places for the presidential election this fall as the coronavirus sows doubt about how safe it will be to cast a ballot in person and thins out an already scarce pool of workers.

Recruitment efforts are increasingly targeting younger people, who are less at risk of developing serious illness from the virus, as officials and advocates aim strategies toward professional associations, students and sports teams to make sure election sites stay open. Still, a big unknown remains.

"Everything having to do with this election will be determined by where we are with the virus, and obviously, indicators are not very encouraging," said Neil Albrecht, former executive director of the Milwaukee election commission, which had worker shortages and was forced to shutter all but five of the city's 180 polling places earlier this year.

MASSIVE EXPANSION OF VOTING-BY-MAIL IN ILLINOIS

More than two-thirds of poll workers are over age 61, putting them at higher risk of the COVID-19 disease. Scores of workers dropped out during this year's primary season, taking with them decades of experience as the pandemic stifled efforts to train replacements.

Richard Dayton, 68, has been a poll worker for five years in Columbus, Ohio, but decided not to work the state's primary over concerns about the pandemic. He's not yet certain whether he'll be staffing an election site in the fall.

"I'm not a young man anymore, and I have to look out for my health," he said.

State and local elections officials hope to have their recruiting and polling place staffing in place well before Election Day in November. In primaries held during the initial coronavirus outbreak, some polling places were late to open after poll workers failed to report.

"If on Election Day morning people just weren't showing up for work, that would be among the worst case scenarios," said Ohio Secretary of State Frank LaRose.

Local governments are typically responsible for recruiting poll workers, but states have been stepping in as the pandemic exacerbates an already fragile system. Some states are partnering with professional organizations such as real estate commissions and state bar associations to have their members staff the polls in exchange for continuing education credits. Ohio has a program to encourage high schoolers to work election sites.

In Georgia, local election officials and the Atlanta Hawks have announced  they will use the NBA team's arena as an early voting site for a primary runoff in August, and will train stadium and team staffers to be election workers. Other sports teams are moving forward with or are considering similar measures.

West Virginia Secretary of State Mac Warner has urged young people to work the polls as a call-to-arms similar to joining the military after the 9/11 terror attacks.

"What that poll worker effort does is it keeps those options to vote open," he said, adding that officials have been reaching out to county clerks, civic groups, rotary clubs, athletic teams and other groups.

Kayleigh Bergh, a 23-year-old recent college graduate from Haverhill, Massachusetts, plans to work a polling place this November. She said her decision to do so was about stepping up during a pandemic and getting politically engaged. Plus, she said, it doesn't look bad on a resume.

"I want to help the state and make everything better since I know my generation is going to take over at some point," said Bergh, adding that she's been trying to recruit friends who have been furloughed from their jobs.

Scott Duncombe of Power the Polls, a newly-formed poll worker recruitment group that includes Comedy Central, Levi Strauss & Co., the Fair Elections Center, Uber and several other organizations, said it plans to flood digital media, offer incentives for poll workers and have companies encourage staffers to volunteer. Duncombe said the group will gear a lot of its campaign toward young people, hoping that it can harness the nation's recent political activism into civic duty.

"This is really the first step to make sure the government and civic life looks like us and feels like us," he said of becoming a poll worker.

Election officials said making sure poll workers feel safe on the job is key to the recruitment effort. Mary Cringan is a 65-year-old retired school principal in Fitchburg, Massachusetts, who has worked the polls in just about every election over the last five years. She plans to wear a mask when she staffs a polling place later this year.

"I would just hate to have the scare of health not allow people to go out and exercise their right to vote," she said. "The clerks in all the cities and towns have their work cut out for them."