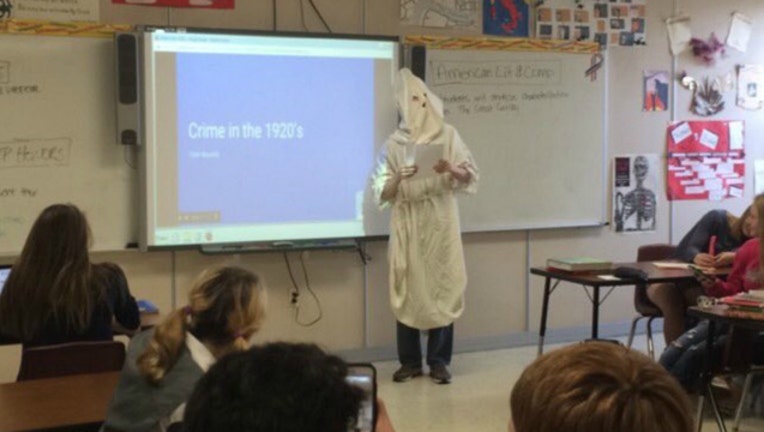 A Wisconsin high school student got a lesson in public outrage Monday, after he made a presentation to his English class wearing a Ku Klux Klan outfit. The garb worn by the unnamed student at Westosha Central High School in Salem was meant to lend historical accuracy to the presentation. But it created an uproar after photos were posted on social media on Monday, according to the Milwaukee Journal-Sentinel. One image was retweeted more than 100 times.

Photos showed the student wearing a white sheet with holes cut out for the eyes and nose. A screen behind the student displays the words "Crime in the 1920s." The incident going viral angered parents and students, leading Westosha Central principal Lisa Albrecht to respond. "As any of you would be, I was appalled by the photo," Albrecht said in a statement.

The school also responded Monday with a Facebook post that has since been removed for reasons that were not immediately clear. One student in the class told the Journal-Sentinel that their 11th grade honors English class had been reading “The Great Gatsby” and that they were given an assignment to research topics related to the 1920s. The student at the center of the controversy had focused his assignment on crime during the era, but reportedly did not detail Klan activity as part of his presentation.

"There was only a student teacher in the room at the time and she never told him to take it off, however she did talk to him after class," the student told the newspaper. It was not known if the student faces disciplinary action.