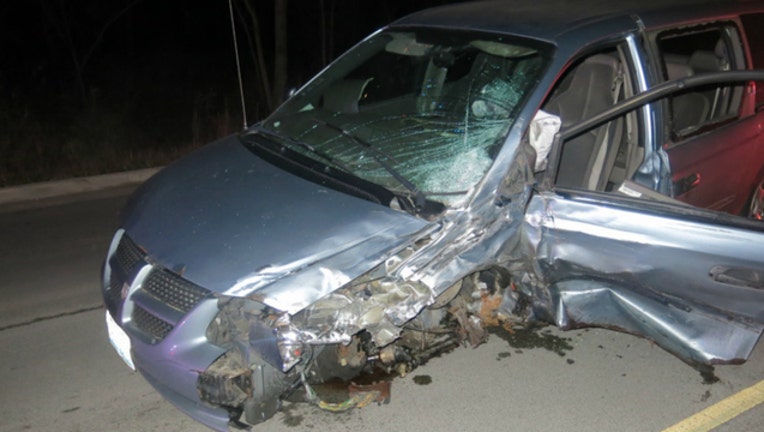 SUN-TIMES MEDIA WIRE - Police are searching for the driver who crashed a vehicle into a family driving home from Holiday Magic at Brookfield Zoo Saturday night and then ran off.

At 8:24 p.m. Saturday, the head-on crash happened in the eastbound lanes of 31st Street just west of First Avenue, according to a statement from Riverside police.

Officers located a 2016 GMC at the corner of 31st and First Avenue and a 2003 Dodge Caravan that crashed at 31st and Golfview, police said. The GMC had two injured passengers.

A 63-year-old woman and 69-year-old man from Cicero were transported to Loyola University Medical Center in Maywood with non-life-threatening injuries, police said. When officers went to check the Dodge, the driver had already ran away.

The airbags of the Dodge were deployed and there was blood on the airbag and steering wheel, police said. Shoes were found stuck under the gas pedal.

Both cars were heavily damaged in the crash and towed from the scene.

Riverside police requested the help of North Riverside and Brookfield police departments and obtained video from Brookfield Zoo that showed the driver running west on 31st from Glofview into Brookfield after the crash, police said. The driver was described as a male wearing a white puffy coat.

The license plates on the vehicle that didn’t match the Dodge were listed to 2002 Subaru station wagon, police said. Police also searched for the male at several address for the registered owner of the Dodge.

Anyone with information should contact the Riverside Police Department at (708) 447-2127 or the Detective James Lazansky at jlazansky@riverside.I.us.