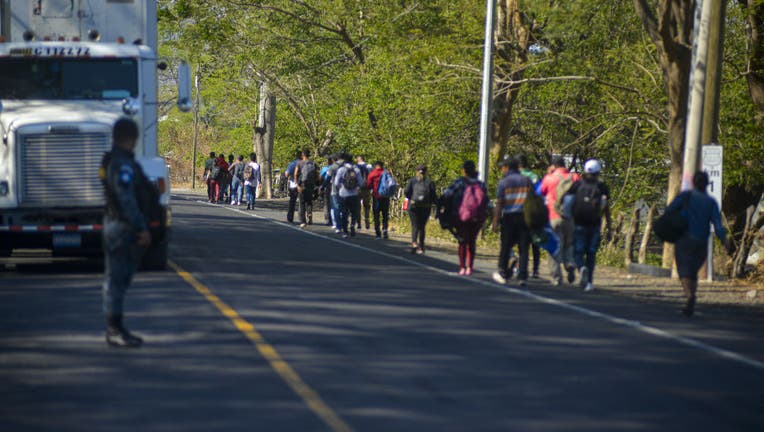 After years of waiting in countries marred by violence, Central Americans who were finally cleared to reunite with their families in the U.S. are facing a major obstacle: the coronavirus pandemic.

Only about 338 — or 12% — of 2,700 people approved to come to the U.S. through a small refugee program have arrived since a court settlement more than a year ago, according to the latest government data. President Donald Trump has shut down the program, but a judge said those already cleared could travel.

After navigating legal snags and rigorous checks requiring they show they're in danger in Central America, the refugees faced more delays as the pandemic grounded flights, canceled interviews and closed clinics that conduct needed medical exams.

And when they finally do arrive, they have a temporary status they must keep reapplying for, face long waits for work permits they might not get and fear being separated from family as Trump cracks down on legal and illegal immigration.

“We feel that at any given moment, someone can knock at the door and say, ‘You are leaving,’” said Lupe, a 24-year-old Salvadoran who arrived in New York in July to reunite with her father after seven years of waiting. “There is a lot of anxiety that comes with that."

Lupe, who didn't provide her last name because she fears for relatives threatened by gangs in El Salvador, came to the U.S. through the Central American Minors program, or CAM.

Created by President Barack Obama in 2014, it allows parents in the country legally to request refugee status for their children who show they're in danger in Guatemala, El Salvador and Honduras, where gang violence and poverty is widespread.

In a letter released Friday, Texas Gov. Greg Abbott wrote that the state will reject the resettlement of new refugees.

The Trump administration shut down CAM in 2017 during a series of executive orders tightening immigration controls. U.S. officials say Trump's policies are designed to confront a surge of Central Americans seeking asylum and reduce claims that lack merit.

Families sued and a settlement was reached last year, with a U.S. judge in California ordering the government to resume processing those who had been approved for the CAM program when it was terminated. The judge said the government was causing harm by preventing the plaintiffs' children from escaping danger.

Lupe completed a medical exam for the CAM program in January, but the virus canceled commercial flights two months later. She waited four more months, until she could get on a repatriation flight primarily bringing American citizens and lawful permanent residents back to the United States.

“The pandemic delayed that a lot,” she said.

Now, Lupe wonders if she will be able to work to help her family back in El Salvador. U.S. officials decide whether to approve work authorization for people like her who come on humanitarian grounds, and there is a risk it could be denied.

Meanwhile, many are still waiting in Central America. Those who have cleared all the hurdles hope for space on a repatriation flight like Lupe. The pandemic also put fingerprinting appointments and interviews on hold, according to a quarterly report done by the U.S. government as part of the court settlement.

A 56-year-old woman who owns a boutique and a small car sales business in Santa Ana, in western El Salvador, has been trying to join her husband in the U.S. through CAM since 2016. The woman, who didn't provide her name because she says gangs have threatened her, got into the program when it expanded to include some relatives of people in the U.S. despite age.

RELATED: Fund now up and running for California's undocumented immigrants

Her daughter managed to join her father in Maryland in 2017 before Trump shut down the program. The Salvadoran mother hasn’t seen her husband in 20 years and got her hopes up when she was told to take her medical exam in January. But the clinic closed because of the pandemic. She finally was able to get an exam in late August and now awaits a travel date.

“I have felt very frustrated, very sad. I want to be with my family," she told The Associated Press by phone.

She said she was terrified when she began receiving death threats in 2013. Men with tattoos would come to a car wash she used to own to demand “monthly compensation” for letting her operate. She says she's received many threats since — through calls, text messages and social media.

“It has been very hard. I had to face everything alone," she said.

Opening a new chapter with her family in the U.S. is her dream.

“I prayed God to be with my family, and he fulfilled it," she said.

Others have the same hopes. U.S. Citizenship and Immigration Services had cleared nearly 1,000 cases for travel as of June 12.

Many applicants had to repeat medical exams that expired by the time the lawsuit was settled last year. Since March, 157 medical exams have expired because of limited staff and grounded flights during the pandemic, the government's report said.

“We have families that were ready to go, were at the airport, and couldn't travel,” said Rut Mendez, at Centro de Integración para Migrantes, Trabajadores y Trabajadoras, or CIMITRA, a group in El Salvador that helps CAM applicants.

The delays come as Trump targets other humanitarian programs. He cut the number of refugees resettled in the U.S. to no more than 18,000 this fiscal year, down from 85,000 the last full year of Obama's term. Democratic presidential nominee Joe Biden wants to raise it to 125,000.

Trump also wants to end Temporary Protected Status, or TPS, the program that brought many parents of CAM applicants to the U.S. It benefits migrants from countries devastated by natural disasters, civil conflicts or other problems. The government argues that the original conditions caused by the disasters or conflicts no longer exist.

While lawsuits are challenging the effort to end TPS, more than 195,000 Salvadorans and over 57,000 Hondurans could see their permits expire in January, leaving them at risk of deportation.

The future also isn't clear for a 44-year-old Salvadoran woman and her son, who arrived through the CAM program in July. She lost her housekeeping job of 18 years at a Washington, D.C., hotel because of the pandemic. Her 24-year-old son has applied for a work permit but doesn't know when or if it will be approved.

RELATED: Migrant kids held in US hotels, then expelled

The woman didn't provide her name because she says gangs have threatened her daughter in El Salvador, who wasn't able to finish her application before Trump ended the program.

“I had mixed feelings," she said. “I was very happy because my son was coming ... but terribly sad because my daughter was not."