Downingtown residents are picking up the pieces after Wednesday's storms devastated Chester County.

CRANFORD, N.J. - Flood-stricken families and business owners across the Northeast were hauling waterlogged belongings to the curb Saturday and scraping away noxious mud as cleanup from the deadly remnants of Hurricane Ida moves into high gear.

The mud-caked sidewalks of Cranford, New Jersey, were lined with the detritus of the suburban dream: household items and furnishings that once made a cozy home reduced to rubbish by the sudden storm waters that swamped homes, cars and businesses and killed at least 50 people in six Eastern states.

This community along the normally placid Rahway River experienced major flooding when Ida arrived in the Northeast with furious rainfall that topped 8 inches (20 centimeters) in places Wednesday and Thursday. 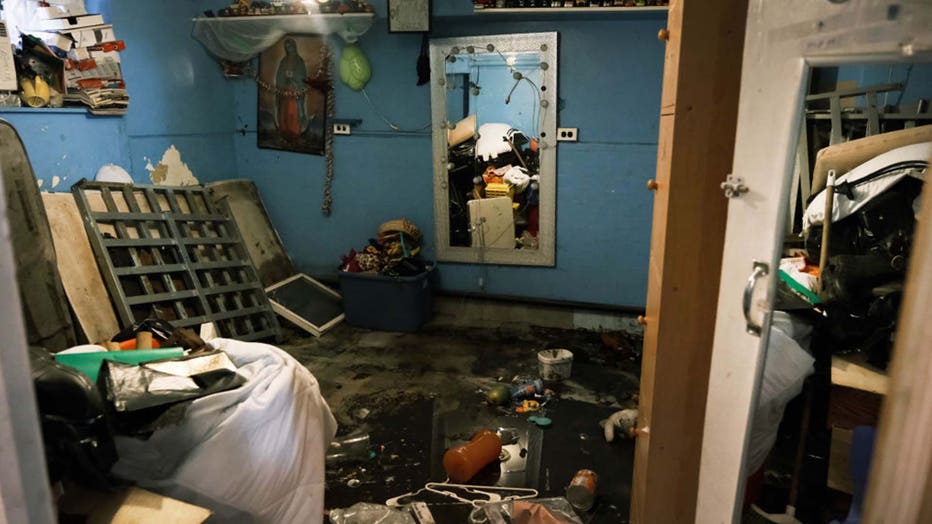 FILE - A flooded basement level apartment stands in a Queens neighborhood that saw massive flooding and numerous deaths following a night of heavy wind and rain from the remnants of Hurricane Ida on Sept. 03, 2021 in New York City.

The main foes during the massive cleanup: muck, mud and sewage.

"The sewer backed up into our basement and now we have to get it deep-cleaned," said Dave Coughlin, one of many residents on his street near the river busily engaged in dragging ruined possessions to the curb. He and his wife, Christina, were taking their two young children to stay somewhere else temporarily while the cleanup progressed.

"I don’t want them breathing this stuff in or smelling the bleach," he said.

After touring a flood-wrecked apartment complex on the banks of the Raritan River on Saturday in Piscataway, New Jersey Gov. Phil Murphy warned residents about the potentially harmful contaminants left behind.

"You have to assume the worst," he said. "If you’re in there, you want to have windows and doors open."

Abid Mian, whose unit in the apartment complex was ruined by 5 feet (1.5 meters) of flood waters that necessitated his family’s rescue by boat, is considering moving.

"Even on a good day, before this, I would sometimes smell fumes coming up from the river, or a really bad stink. This is the third time this has happened in the last 10 years," he said.

The complex was littered with ruined cars, some with their doors and hoods splayed open in a futile effort to dry them; they were coated with mud and silt throughout their interiors. Two cars had been swept from the parking lot onto the banks of the river, and a tennis court was destroyed. Large trash receptacles were being brought to the complex to start hauling away the debris Saturday.

This footage, taken at the Metropolitan Avenue subway station in Brooklyn, New York shows passengers dodging floodwater as it poured down onto the platform. (Credit: @auntiebats via Storyful)

Ida blew ashore in Louisiana as a fierce Category 4 hurricane on Sunday tied as the fifth-strongest storm to ever hit the U.S. mainland. Though downgraded from hurricane status, Ida then moved north with heavy rain that overwhelmed urban drainage systems.

A record 3 inches (7.5 centimeters) poured down in a single hour in New York City, where by Thursday afternoon, nearly 7 1/2 inches (19 centimeters) had fallen, according to the National Weather Service. Eleven people died when they were unable to escape rising water in their low-lying apartments.

On Saturday, the city opened service centers in each of the five boroughs to connect people with housing, food and mental health counseling. Seventy-seven people displaced by the storm were being housed in hotels, Office of Emergency Management spokeswoman Christina Farrell said.

In Connecticut, funeral arrangements were set for State Police Sgt. Brian Mohl, who was swept away with his vehicle while on duty early Thursday in Woodbury. A wake for Mohl is scheduled for Sept. 8 in Hartford, where the funeral will be held Sept. 9.

Floodwaters and a falling tree also took lives in Maryland, Pennsylvania, New York and New Jersey, where at least 27 people perished, the most of any state. Most drowned after their vehicles were caught in flash floods.

Authorities continued searching for two New Jersey friends, Nidhi Rana, 18, and Ayush Rana, 21, missing since Wednesday after their car was caught up in the flood-engorged Passaic River.

Two doors down from the Coughlins on Saturday, a contractor hauled can after can of debris to a large industrial trash container in the driveway. Water trickled down the gutter on both sides of the street, fed by basement sump pumps trying to get floodwater out of homes.

The range of possessions wrecked by the storm and surrendered as trash was heartbreaking: a dining room candle; children’s toys including a sandbox; sodden rugs and carpeting; a patio heater; couch cushions, and a child’s art easel with a rudimentary painting still clipped to it.

"It happened so suddenly," Christina Coughlin said. " This was so unexpected. We definitely would have prepared more had we known it was going to be this bad."