There are now 19 people who have died in Illinois from COVID-19, and a total of 1,865 cases across 35 counties. Health officials announced that Douglas, Marshall and Morgan counties are now reporting its first cases of the disease.

Governor JB Pritzker announced Wednesday Illinois is delaying its tax filing deadline from April 15 to July 15. He said refunds will continue to be distributed in a timely fashion.

It was also announced Wednesday that two correctional officers and one man incarcerated at Stateville Correctional Center have tested positive for COVID-19, as well as a contractual worker at Sheridan Correctional Center. The two Stateville correctional officers are recovering at home and the individual who is incarcerated is isolated and recovering in the hospital. Those who have been identified as being potentially exposed are being quarantined and the facility is on a 14-day lockdown.

After consulting with the Illinois Department of Public Health, the Department of Corrections determined staff and men incarcerated at the Sheridan facility were at low to medium risk for potential exposure. The facility was also placed on a 14-day lockdown.

For most people, the new coronavirus causes mild or moderate symptoms, such as fever and cough that clear up in two to three weeks. For some, especially older adults and people with existing health problems, it can cause more severe illness, including pneumonia, or death.

The deaths in Illinois include a 90-year-old woman who lived at a suburban Chicago nursing home where dozens of residents and staffers tested positive for the virus.

The death at Chateau Nursing & Rehabilitation Center in Willowbrook comes as a top official at the facility denied a contention made by a former certified nursing assistant that she had quit her job because there was not enough protective gear or appropriate cleaning supplies.

“I took pictures of our supply of gloves and masks and gowns and goggles and face shields and hand sanitizers and there is no shortage,” Ron Nunziato, CEO of Extended Care Living LLC, which manages the facility, told the Chicago Tribune.

But Tonya Davis said she left her job after she was unable to get even the most basic supplies. “They didn’t (give) me anything, really,” she told the paper. “Just gloves. My face mask, I got at another facility.”

Davis said she tested negative for the virus.

On March 14, a day after the DuPage County facility announced that it would not allow visitors, Pritzker announced a confirmed case of COVID-19 at the facility. Days later, the governor announced there were 22 confirmed cases of the virus, and the number has since increased to 47 cases — 33 residents and 14 staff members.

Meanwhile, prosecutors, defense attorneys and judges have been working to get some Cook County Jail detainees released and away from people who may be carrying the virus. The sheriff who runs the jail said late Tuesday that he was taking steps to address concerns raised by Chicago Mayor Lori Lightfoot and others about the possibility that the process may risk the infection of people outside the jail.

In a news release, Sheriff Tom Dart’s office said all people being released are having their temperature taken to “make sure no release is leaving with flu-like symptoms.” Also, the jail is working with various health departments to find appropriate housing for anyone ordered released who has symptoms, he said.

The comments from Dart come after a judge called for the review of thousands of criminal cases in the hopes of reducing the jail population to help prevent the virus’ spread.

On Wednesday night, Dart’s office said 17 detainees and four correctional officers at the jail had tested positive for the virus.

It was not immediately clear exactly how many detainees have been released under the new process, but on Wednesday the jail held 5,306 detainees, compared with 5,427 on Monday.

Governor Pritzker said Monday that Illinois is ramping up production of masks and hand sanitizer, among other personal protection equipment, to help combat the spread of COVID-19 in the state.

“In the face of the unprecedented challenges presented by COVID-19, the people of Illinois have stepped up once again: our innovative biotech companies and state-of-the art manufacturers are teaming up with the State of Illinois to ramp up production of Personal Protective Equipment,” Governor Pritzker said in a statement. “We’re not just waiting for in-state production. My administration continues to work day and night to scour the global supply chain. Illinois is acquiring PPE to compensate for what we haven’t received in our federal requests. But we are doing so while running up against obstacles that should not exist.”

Gov. Pritzker said Illinois would have to double the number of available hospital beds in the next two weeks to treat COVID-19 patients if the coronavirus is not contained.

The state would need almost 38,000 additional hospital beds, including more than 9,000 in intensive-care units, by April 6, in a worst-case scenario, the governor said at his daily briefing on Tuesday. And nearly 5,000 ventilators would be in demand — more than double what’s available in the state.

But Pritzker said efforts to tame the potentially deadly virus, such as his order to close non-essential businesses and keep people from leaving their homes unnecessarily, should temper those numbers. Despite the fiscal hardships, he said he opposed President Donald Trump’s suggestion that such social-distancing practices be lifted soon to spare the U.S. economy.

“We can revive our economy,” Pritzker said. “We can’t revive the people that are lost to this virus.”

Phil Flynn from The Price Futures Group talks about his takeaways from the $2 trillion stimulus package.

Illinois can now process 600 tests daily in four state-run laboratories, up from 50 a day one month ago. Drive-thru, mobile and retail-store testing sites will produce hundreds more and commercial facilities are expanding capacity to 4,300 a day, Pritzker said.

But the rapidly spreading illness has outrun containment by testing alone, the governor said.

“We are beyond the moment where testing alone can be our primary weapon against this virus,” Pritzker said. “We can’t just test, we have to treat.” 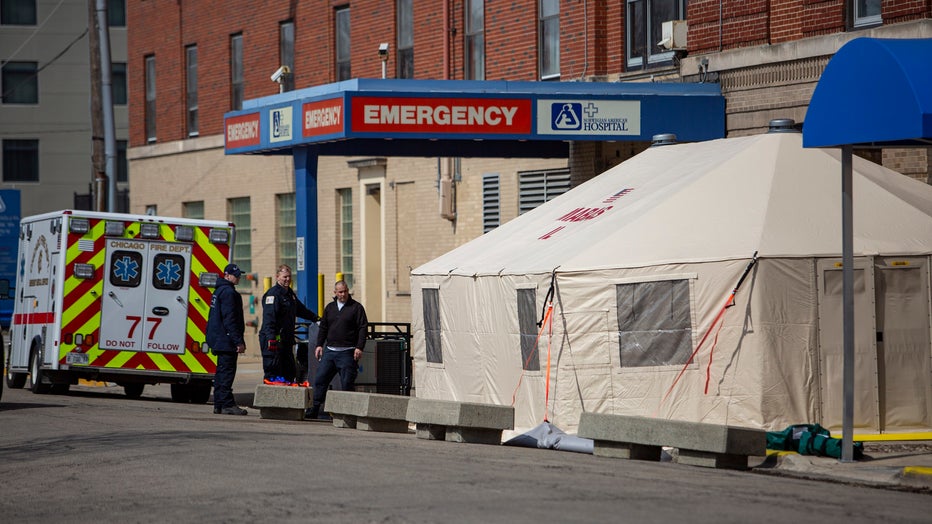 A COVID-19 testing tent is set up outside of Norwegian American Hospital in Humboldt Park on Chicago's west side, on March 24, 2020 in Chicago, United States. (Photo by Jim Vondruska/NurPhoto via Getty Images)

In a worst-case scenario, public health officials said that by Monday, the state would need an additional 3,300 beds and 400 ventilators. Just a week after that, the need would grow to 37,600 additional beds, of which 9,400 would have to be ICU, and 4,700 ventilators.

The Illinois Emergency Management Agency has sent tents to hospitals to serve as triage centers at 66 of the state’s 200 hospitals for evaluating potential COVID-19 patients. Officials from IEMA, the National Guard and the U.S. Army Corp of Engineers are investigating closed hospitals that could be temporarily re-opened.

Chicago Mayor Lori Lightfoot announced on Monday a plan to reserve thousands of hotel rooms for patients with mild cases of COVID-19.

And Pritzker said that his weekend call for retired medical professionals to step up yielded 180 online applications.

Pritzker reported that after speaking to Trump Monday, the White House told the public health department that the state would receive 300 ventilators and 300,000 protective face masks in the coming days.

At a press conference Monday afternoon, Illinois Governor JB Pritzker revealed he reached out to Donald Trump regarding COVID-19 supplies and that the president returned his call.

Nationwide, more than 44,000 people have been diagnosed with coronavirus, according to the CDC website, making the United States the third worst-hit country in the world. The worst-hit country is China and the second worst is Italy.

Gov. Pritzker encouraged Illinois residents who are healthy to find ways to volunteer to help others during this time. Available opportunities include packing lunches, donating blood, delivering meals to the elderly, and serving food at homeless shelters. You can find ways to help at serve.illinois.gov.

On Friday, Gov. Pritzker issued a "stay at home" order for the entire state of Illinois, which will last until April 7.

Residents will still be able to take care of essential tasks, such as going to the grocery store, gas stations, and pharmacies, as well as take walks outdoors; just practice social distancing. Roads and highways will also remain open to traffic.

“We are doing all that we can to maintain as much normalcy as possible while taking the steps we must to protect our residents,” Governor Pritzker said in a statement last week. “I fully recognize that in some cases I am choosing between saving people’s lives and saving their livelihoods. But ultimately, you can’t have a livelihood without a life. This will not last forever, but it's what we must do to support the people on the front lines of this fight, and the people most vulnerable to its consequences.”

COVID-19 cases in Illinois have occurred in ages from younger than one to 99 years.