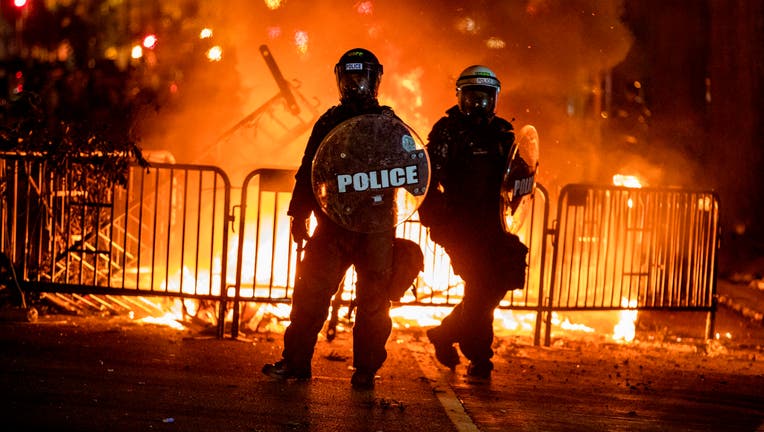 Police stand by burning barricades in front of the White House during a protest against the death of George Floyd at the hands of Minneapolis Police in Washington, D.C. on May 31, 2020. - Thousands of National Guard troops patrolled major US cities a

LINCOLN, Ill. - The fire chief of the central Illinois city of Lincoln apologized Thursday for sharing a social media post that asserted supporters of President Donald Trump would blow the heads off looters.

Chief Bob Dunovsky, Lincoln’s top firefighter for a year, said the decision to share the Facebook post was made “without much thought.” His written apology was made to Lincoln Mayor Seth Goodman, the City Council and the city’s residents.

“Today in the world of social media, what one may find cute, amusing, or even funny can conversely be found offensive or hurtful by others,” Dunovsky wrote in his apology. “I’m sorry and I apologize for the nature of said posts.”

Dunovsky said he decided to apologize on his own after negative reaction to the post. It was not immediately known if he will face disciplinary action.

The State Journal-Register in Springfield reports Dunovsky’s post on his personal Facebook account said looters should target homes with signs supporting Vermont senator and presidential candidate Bernie Sanders or former Vice President Joe Biden. It noted “they don’t believe in guns,” and Trump supporters will ”blow your worthless head off.” Vandalism and looting has followed peaceful protests of the death of George Floyd as a white Minneapolis police officer pressed his knee into Floyd’s neck.

Dunovsky, who shared the post Tuesday and took it down Wednesday, said it was “just a Second Amendment-like meme” and there was never any intent to encourage the looting of someone’s house because of their political stance. He added the message was that it was better to have a gun to protect yourself than not to have one.