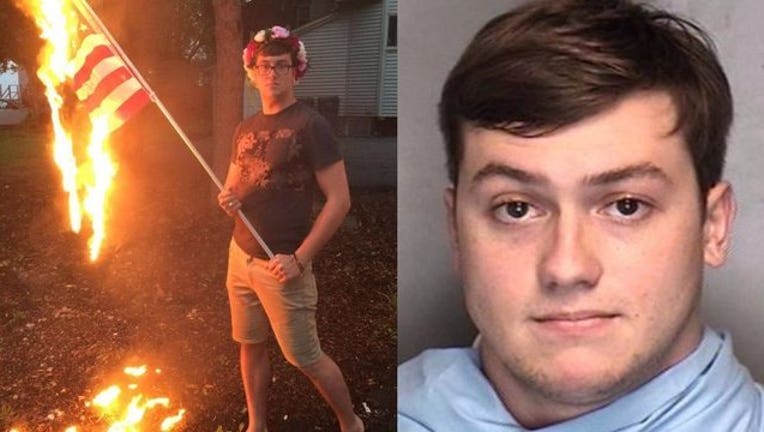 CHICAGO (AP) - A 22-year-old central Illinois man who was arrested and detained after posting online pictures of himself burning an American flag has filed a federal lawsuit seeking to have the state's flag desecration law declared unconstitutional.

Such state laws are already invalid after the U.S. Supreme Court ruled separately, in 1989 and 1990, that flag burning and other forms of damage are constitutionally protected free speech. However, dozens of states still have the laws.

Police in Urbana used Illinois' flag desecration law to arrest local resident Bryton Mellott on July 4 of last year. He said he carefully planned his demonstration to protest racial discrimination, poverty and other injustices, and then posted six photographs of his actions on Facebook. The posts, which generated hundreds of comments, led police officers to arrest Mellott while he worked at Wal-Mart and detain him for several hours. He was released without being charged.

Mellott, who is being represented by the American Civil Liberties Union of Illinois, discussed the lawsuit at a news conference in Champaign on Thursday, a day after the lawsuit was filed.

"Open dissent is the highest form of American patriotism," Mellott said, according to a copy of his remarks. "And it was a frightening display of irony that on the Fourth of July, I should be taken from my workplace to sit in a county jail for exercising this liberty."

Arrests for flag desecration are rare.

Still, experts say states have been reluctant to repeal such laws either because it's politically unpalatable or it hasn't been a priority. About 40 states have flag desecration laws and only a handful have changed them. Wisconsin's flag desecration law was knocked down by the state Supreme Court in the 1990s and removed. Missouri's was repealed effective this month, after a long court battle prompted by a similar lawsuit.

President-elect Donald Trump recently said that anyone who burns an American flag should face "consequences," such as jail or a loss of citizenship, despite the Supreme Court determinations.

The lawsuit, filed late Wednesday, names several police officers. Urbana police have said they arrested Mellott to protect him from possible backlash from the online posts. An Urbana Police Department spokesman did not return a message seeking comment.

An attorney for the ACLU said one of their main goals is to provide clarity for authorities.

"It's very clear that this law is unconstitutional and we want to make sure that in the future, Illinois law enforcement officers know that they cannot arrest people under this statute," ACLU attorney Rebecca Glenberg said.