Pritzker said he is not planning to bring in the National Guard but that there are hundreds who can be called into place if needed.

"Our coordinators have been in regular discussion, not only with the city of Chicago, but also with northern suburbs that border Wisconsin to make sure that we're providing the support that they need when they need it," Pritzker said.

Rittenhouse, of Antioch, is on trial on homicide and attempted homicide charges for killing two men and wounding a third with an AR-style semi-automatic rifle during a tumultuous night of protests over the police shooting of Jacob Blake, Black man, by a white police officer.

He shot and killed Joseph Rosenbaum, 36, and Anthony Huber, 26, and wounded Gaige Grosskreutz, now 28. Rittenhouse is white, as were those he shot. The case has become a flashpoint in the debate over guns, racial injustice, vigilantism and self-defense in the U.S.

Deliberations in the trial resumed Thursday.

Steve Greenberg from Greenberg Trial Lawyers shares his perspective on the Kyle Rittenhouse trial as deliberations proceed into the third day.

Kenosha business owners, who saw their buildings destroyed during last year's unrest, are worried about potentiall fallout from the verdict.

"We've all just kind of been waiting, waiting for this to come down, and then we can say, 'OK. That's one more phase that's in the past,' and hopefully, we can take something from this," said Aro Lock and Door Manager Joshua Curtis.

Chicago police canceled days off for all city officers the past weekend, reportedly bracing for the Rittenhouse verdict. 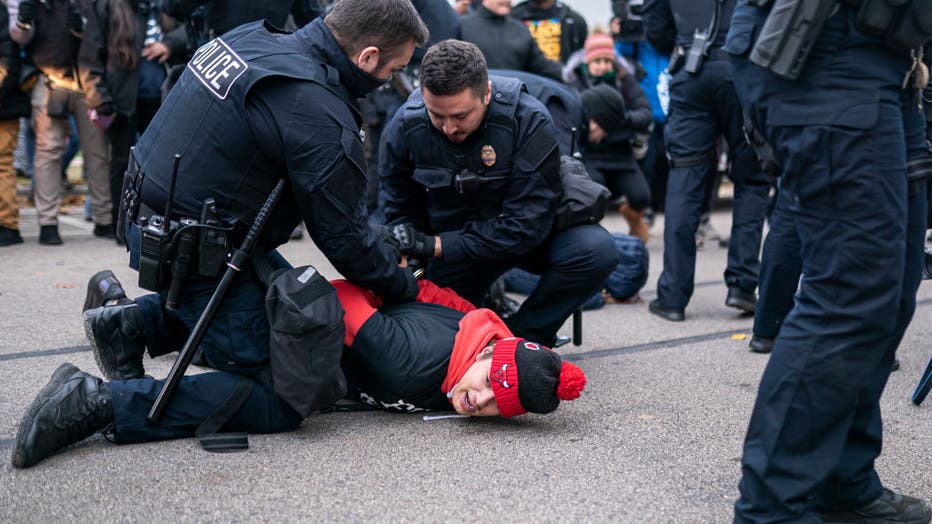 Kenosha Police arrest Anthony Chacon, 20, who is in favor of conviction in front of the Kenosha County Courthouse while the jury deliberates the Kyle Rittenhouse trial on November 17, 2021 in Kenosha, Wisconsin. (Photo by Nathan Howard/Getty Images)