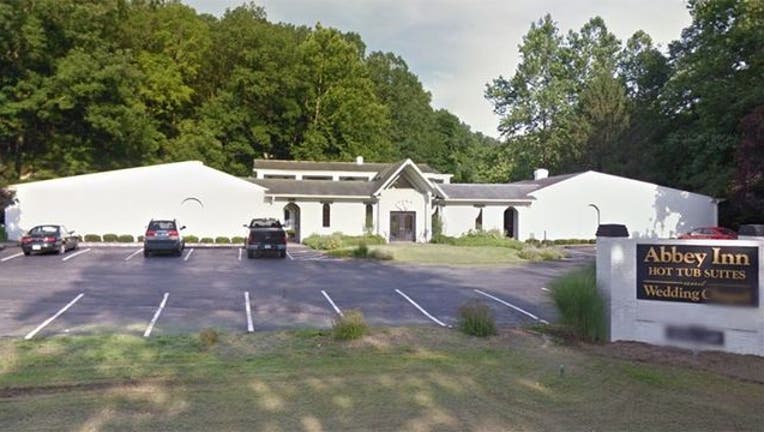 An Indiana woman who stayed at the Abbey Inn in Brown County, Indiana, reportedly was charged $350 and threatened with legal action for writing a negative review. (Google Street View)

NASHVILLE, Ind. (AP) - The former owner of an Indiana hotel is being sued for charging a woman $350 for posting a negative online review that said there was hair and dirt on the sheets in her room and other cleanliness issues.

Indiana's suit, filed Dec. 15, seeks a reimbursement for the guest, Katrina Arthur, and a court order barring the southern Indiana hotel from maintaining and enforcing such a policy, which it calls "unfair, abusive, and deceptive."

Arthur said she and her husband stayed for one day in March 2016 at the hotel that abuts Brown County State Park in the rustic tourist town of Nashville. When they arrived, their room was unclean, without a functioning air conditioner and had other issues, she said.

"It was a nightmare," the Solsberry, Indiana, woman told WRTV-TV. "The room was unkempt, and it looked like it hadn't been cleaned since the last people stayed there. We checked the sheets and I found hairs and dirt."

Indiana's lawsuit says Arthur had not seen the hotel's review policy online and she wasn't provided with a copy of it during her stay. It contends Arthur tried to complain about the room's condition while staying at the inn, but no employee was on-site and her calls to an after-hours telephone number went unanswered.

When Arthur checked out of the hotel, there was no one at the front desk she could complain to, the suit says.

After Arthur received an email from the hotel asking her to leave an online review of her stay, she posted her review "recounting the issues she encountered," the complaint says. On April 2, 2016, it alleges she received a letter from Abbey Management Inc. owner Andrew Szakaly saying her "false statements" had harmed the business and demanding she remove the review within one week or face legal action for libel, the state's suit says.

A few days later, her credit card was charged $350 because of the negative review, it says. She filed a complaint with the state attorney general's office on April 21, 2016.

Szakaly said in a statement Wednesday that he is president and sole shareholder of Abbey Management Inc., but has not operated the 14-room Nashville hotel since January 2017, when new owners assumed control of the inn.

Szakaly said that between fall 2015 and summer 2016, the hotel had the review policy under which Arthur was charged. That policy was a response to hotel guests checking out without making any complaints during their stay and then demanding a refund or posting negative comments and reviews on social media, he said.

"It's a shame that the actions of a disgruntled guest, taken 22 months ago, will now damage the hard work & devotion of the new, young management couple who had nothing to do with that guest or that policy which has long since been cancelled," he said.

Amanda Sweet, the hotel's current owner-operator with her husband, said Wednesday they were taken "completely by surprise" by news of the lawsuit stemming from Abbey Management's alleged actions as their predecessor. She said she and her husband took over ownership in January 2017 and do not have a policy that charges guests if they make negative reviews.

Since the lawsuit was filed, however, she said the hotel has faced "hundreds of trolls who've taken over all our review sites" and she's also received threatening phone calls.

"It's been a horrible 24 hours for us," Sweet said. "We've been pouring ourselves into making positive renovations, bringing this beautiful building back to life. This is our livelihood and we don't want it to go away."