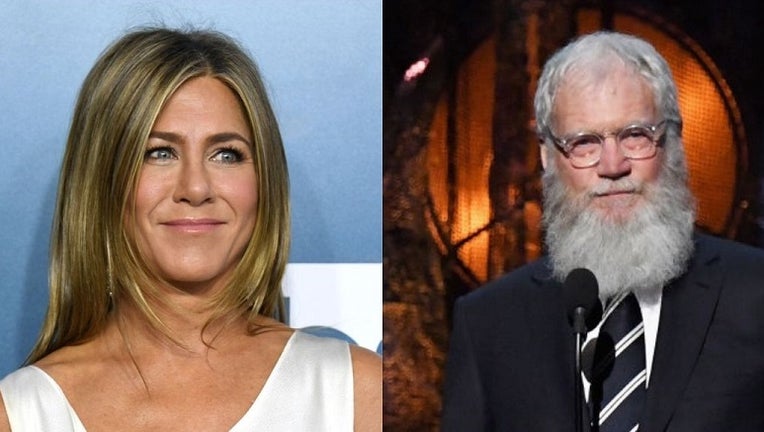 Letterman, 73, has been slammed this week after critics shared resurfaced clips of the longtime host conducting uncomfortable interviews with female stars, including Paris Hilton and Janet Jackson.

One segment receiving renewed attention is Letterman's 1998 interview with Aniston, who was promoting "The Object of My Affection" at the time. During the interview, the "Friends" alum shares a story with Letterman about once running into fans in a gym's steam room. Letterman later moves his chair close to the actress and says, "Forgive me if this is rude. I just want to try one thing."

He then gets close to her face and places strands of Aniston's hair into his mouth and sucks on it before slowly pulling away. Aniston was laughing during the bizarre encounter, but was visibly in shock minutes later as she took a cloth to wipe her hair.

"I'm sorry," Letterman tells her in the clip. "Something to do with the steam room!"

"That was something I'll never forget," Aniston responded.

"This jennifer aniston interview on David Letterman in 1998 is still disgusting to watch," another agreed.

Another person defended Aniston, writing, "This horrific. We need to keep remembering this stuff happened and still does in people’s everyday lives."

"I had no clue he was so gross," another reacted.

"Can't get over how creepy and disturbing this clip of Jennifer Aniston on Letterman is," a Twitter user added.

The renewed attention of Letterman’s treatment of his guests while he was the host of "The Late Show" comes after a resurfaced clip of him interviewing Lindsay Lohan in 2007 went viral. In the clip, the host continues to ask the young star about her upcoming stint in rehab until she eventually becomes so uncomfortable she starts to cry.

Letterman's 2007 interview with Hilton was also criticized. Letterman is accused of visibly making her uncomfortable when he continues to probe her with questions about time she spent in jail after violating her probation for reckless driving.

According to Glamor, the interview sees Letterman ask "How did you like being in jail?" almost immediately when Hilton takes the stage as the audience applauded wildly. The outlet reports that Hilton handled herself well and may have been expecting the uncomfortable questions about jail but that Letterman continued to press her on the subject.

"Obviously it was a very traumatic experience, but I did it," she said. "I feel like I can do anything now."

Eventually, she got the host to move on to promote her perfume line, after flat out telling him that she would not answer any more of his questions about jail. After that, the outlet reports he lectured her about her status as a role model for youths.

Other examples leaving fans furious include his past interviews with Janet Jackson and Christina Aguilera.

A rep for Letterman did not immediately respond to Fox News' request for comment.