Judge to Cook County Jail: Do more to protect inmates from virus

Cook County Jail in Chicago must do more to ensure social distancing among its 4,000 inmates to stem the spread of the coronavirus that’s already killed six detainees and one guard at the facility, a federal judge ruled Monday.

CHICAGO - Cook County Jail in Chicago must do more to ensure social distancing among its 4,000 inmates to stem the spread of the coronavirus that’s already killed six detainees and one guard at the facility, a federal judge ruled Monday.

Judge Matthew Kennelly stopped short of mandating a process that would lead to the release of older inmates and those with underlying health conditions more susceptible to dying from COVID-19.

The southwest Chicago jail — one of the nation’s largest — has already taken measures to limit close contact, including by creating more single-occupancy cells and providing more reading material to inmates to encourage them to stay in their cells and away from common areas, Kennelly noted.

He issued an order on April 9 requiring the jail to provide ample sanitizer to inmates, and it later distributed 28 gallons of sanitizer despite concern that some inmates would drink the alcohol-based substance. That order didn’t mandate social distancing procedures beyond intake areas, citing security constraints.

In his latest ruling, Kennelly noted testimony that some guards openly mocked social distancing. Others told him the jail wasn’t cleaning common areas sufficiently, and that phones weren’t sanitized between inmate calls. The new order says phones and other objects must be cleaned after each inmate use.

Some jail officials said inmates are partly to blame for not heeding instructions on how to protect themselves. Kennelly’s order calls on jail authorities to speak regularly to inmates to stress the importance of social distancing. 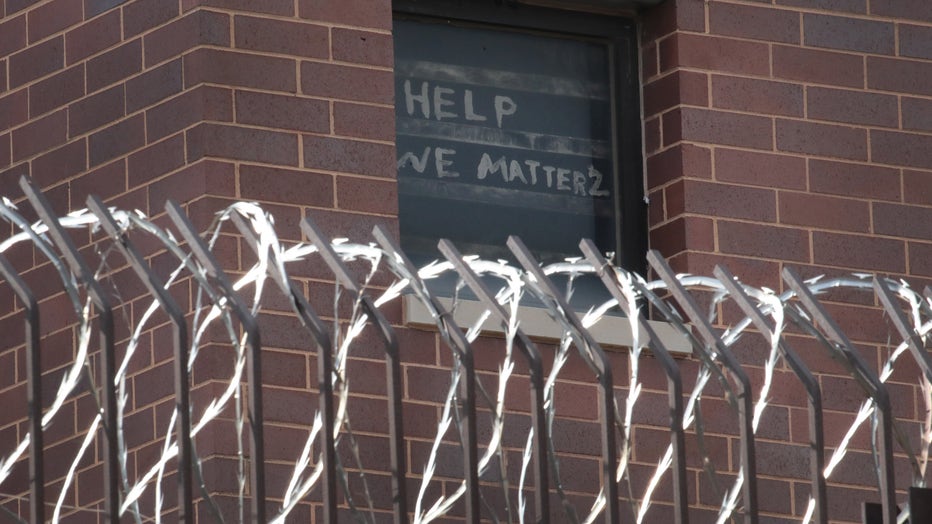 A sign pleading for help hangs in a window at the Cook County jail complex on April 09, 2020 in Chicago, Illinois. With nearly 400 cases of COVID-19 having been diagnosed among the inmates and employees, the jail is nation’s largest-known source of c

The judge praised Cook County Sheriff Tom Dart, who oversees the jail, for “a significant and impressive effort to safeguard” inmates from infection. But he agreed with lawyers who filed a lawsuit on behalf of detainees fearful of catching COVID-19 that more needs to be done. The suit led to both of the April orders.

The jail must mostly phase out the practice of doubling up inmates in some cells or holding them in large-group units, Kennelly said. He set April 29 as the deadline for compliance.

As of Sunday, 229 detainees had the coronavirus, including 17 who were hospitalized, and 232 had recovered, sheriff’s data shows. In addition, 158 correctional officers and 35 sheriff’s employees had the virus, while 170 had recovered and returned to work.

Kennelly said earlier this month that the jail had an infection rate of 50 per 1,000 people, far higher than elsewhere in the county. Dart responded that this was because the jail tests everyone with symptoms, which isn’t the case outside.

The jail’s population has dropped by more than 1,000 to around 4,000 following another judge’s order in March for bail reduction hearings leading to the release of detainees not considered a threat.

Citing those numbers, Kennelly said Monday it was clear that inmates vulnerable to COVID-19 already had recourse for winning their release. And he rejected pleas from inmates’ lawyers that crowding in the jail itself during a pandemic could be grounds for release.

“This,” he said, “would be tantamount to saying that, in the present circumstances, the Constitution prohibits detaining people in jails.”