CHICAGO - An Illinois teacher whose school board voted 5-2 to terminate her over a social media post decrying the George Floyd riots in nearby Chicago told Fox News on Thursday she is not guilty of their alleged accusation the comments "harm[ed] students," as her attorney wondered aloud how many other educators are having their profiles secretly monitored by school boards or unions.

While on vacation in the U.S. Southeast over Memorial Day 2020, Jeanne Hedgepeth of Palatine publicly lamented news coverage of the rioting and criminal behavior in downtown Chicago as stores were looted and property vandalized in response to the death of George Floyd, a Black man from Minneapolis whose killer, Officer Derek Chauvin, was later convicted of murder.

"I don't want to go home tomorrow. Now that the Civil War has begun, I want to move," Hedgepeth wrote in a caption to a beach photo – the day before she was to return home to the Schaumburg, Ill., area where School District 211 is located.

Hedgepeth told the "Ingraham Angle" she thought her comments were noncontroversial until a subsequent social media discussion in which a critic accused her of being blinded to the rioters' plight because of her "White privilege." 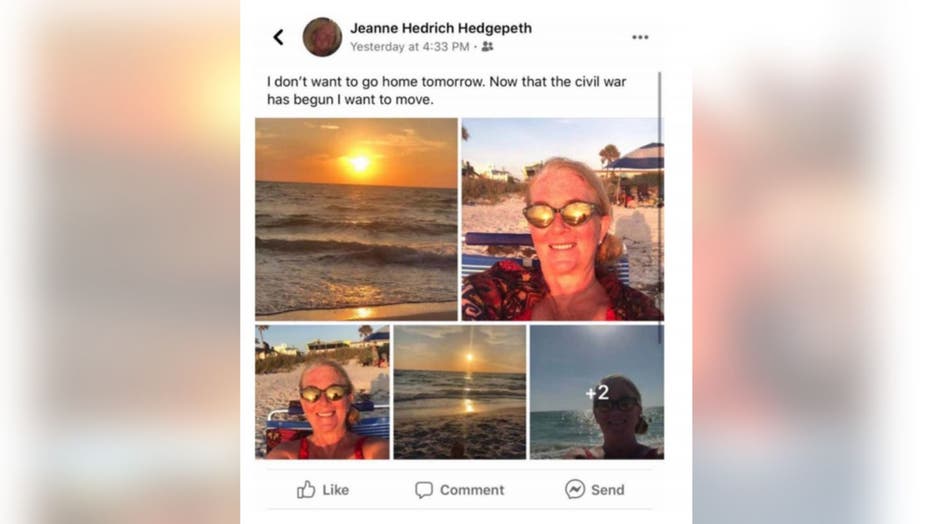 A post Hedgepeth wrote on Facebook while vacationing in Florida during the worst of Chicago's unrest on the weekend after George Floyd's killing in Minnesota. (Judicial Watch)

"I have worked for the district for 20 years. I took pride in my work. I loved my job and students. I am the sole supporter of my daughter. I was really upset about the rioting," she told host Laura Ingraham.

"Protesting we need more, but rioting: none. People were supporting [the rioting and] it was freaking me out. I made a few comments. I had a conversation with a young lady who told me to shut up with my White privilege."

That discussion, she said, upset numerous others who observed her profile.

She also shared a meme about riot control using a water cannon hooked up to a septic truck and wrote a lengthy June 1 post referencing race, crime and the media:

"I am about facts, truth seeking and love. I will speak on any topic I choose because I live in a free country. I find the term ‘white privilege’ as racist as the ‘N’ word. You have not walked in my shoes either so do not make assumptions about me and my so called privilege.  You think America is racist? Then you have been hoodwinked by the white liberal establishment and race baiters like Jesse Jackson and Al Sharpton. Travel the world and go see that every nation has racism and some more than others but few make efforts such as we do to mitigate or eliminate it. I have lived and seen. The people I am informed by about the black experience in America are actually some of the smartest people in America. And it so happens they are black. I highly recommend studying Thomas Sowell, who is now retired and in his 80’s. A treasure. A truth seeker. [D]oes REAL research and analysis. Candice Owens is one of the smartest and most courageous women in America and Larry Elders speaks the truth with a great sense of humor and FACTS not feelings. They are who I listen to when it comes to facts about the black experience in America. Don’t you think there is a deeper problem than racism when 50% of murders in America are committed by 13% of the population? Do you think there might be a subtle genocide of black babies when most planned parenthoods are put in poor neighborhoods and that 30% of abortions are black babies. [B]lack women only make up 7% of the U.S. population. The greatest power you have is what you believe about yourself. [W]hat have Democrats, mainstream media and intellectuals in ivory towers been telling the black community to believe about themselves for forty years? Wake up and stop believing them, then things will change." 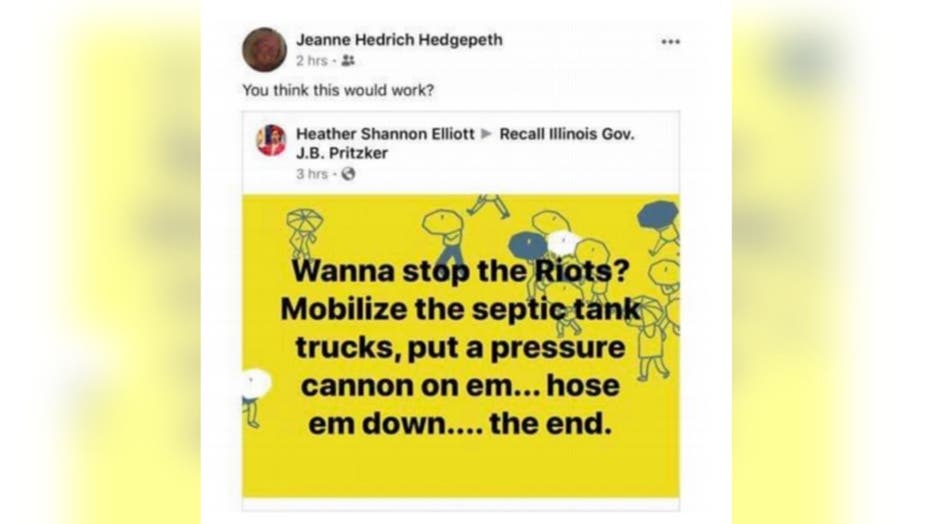 She reiterated her denial of claims she is racist for denouncing the riots and her objection to being accused of White privilege:

"I might have more conservative views but there is nothing racist about what I said. Of course, I am being accused of being a racist which I have no history of whatsoever," she said.

Erin Holmes, the communications director for School District 211, responded to "The Ingraham Angle"'s request for comment by saying she is aware of Hedgepeth's lawsuit:

"At this point, it is a legal issue and we as a district cannot comment on any details," Holmes told the program.

Later in the interview, Hedgepeth's attorney, Christine Svenson, said the Chicago riots were indeed "crazy" and that her client was rightfully "terrified as an American citizen" and an Illinois resident.

"She teaches a diversity of opinion in her classes. The board found she was harming students and talking about racial issues… I wonder this: Are they going through the social media posts of all of the other teachers?" Svenson asked.

Hedgepeth added that two now-former colleagues, who are apparently the only ones she is still in contact with, are "terrified" by her case.

"They are scared. Everyone is scared," she said.

Hedgepeth also disclosed that she had tried for months to retain legal counsel but that no one would take her case.

She compared it to how President Trump continued to see personal attorneys like Rudolph Giuliani "demonized."

"I called many lawyers and many people don't want to touch it – Even Trump's lawyers got demonized. It's OK if you are a murderer but you can't defend a teacher?"

"The school district took what could have been a teachable moment about respecting diversity of viewpoints and turned it into a clear civil rights violation," Judicial Watch President Tom Fitton said in a statement. "Jeanne Hedgepeth had every right to express herself freely and openly on her personal Facebook page, outside of school, about matters of undeniable public concern. Firing her for doing so violated the First Amendment, and the school district and district officials who did so will be held accountable."