Illinois became the latest state to make June 19 an official state holiday as Gov. J.B. Pritzker signed the historic piece of legislation at the Abraham Lincoln Presidential Library and Museum in Springfield near a rare copy of the Emancipation Proclamation on Wednesday.

Juneteenth, which commemorates the abolition of slavery throughout the United States and its territories in 1865, will be recognized as National Freedom Day in Illinois.

"Just as Illinois led the nation as the first state to ratify the Thirteenth Amendment, in 2021, we are leading the nation in tackling structural racism head on thanks to the guiding vision of Leader Lightford, Representative Ford, Speaker Welch and the entire Illinois Legislative Black Caucus," Pritzker said. "It brings me exceptional pride to sign into law the declaration of Juneteenth as a formal state holiday in Illinois, making us one of the few states in the nation to give it the full status it deserves." 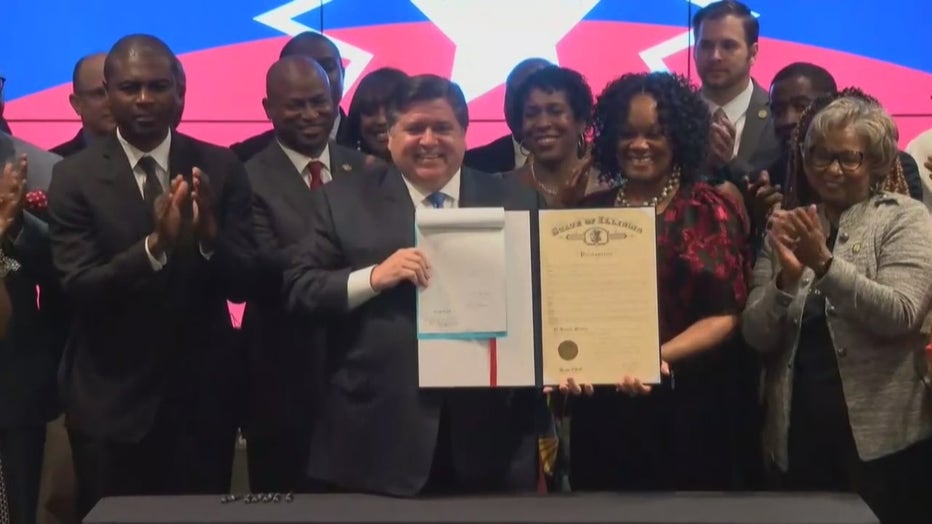 To recognize the day throughout the state, all flags covered by the Illinois Flag Display Act will be lowered to half-staff on Saturday, June 19.

A Juneteenth flag will also fly over the state capitol in Springfield.

The bill also makes Juneteenth a paid holiday for all state employees and public school educators when June 19 falls on a weekday. The first paid state holiday for Juneteenth will be in 2023 since Juneteenth is on Sunday next year, according to Pritzker's office.

While many states commemorate the ending of slavery, only some observe Juneteenth as an official holiday. The number has grown following last summer’s reckoning over racial injustice, most recently including Maine and Washington.

The federal bill, which cleared the House 415-14 on Wednesday, now goes to President Joe Biden’s desk to be signed into law.

This historic announcement comes as places like Evanston are preparing to host events this weekend in honor of the day.

"With this new law, no longer can a child grow up in Illinois without learning about Juneteenth in school. With this change, the people of Illinois will have a day to reflect on how the freedom that we celebrate just two weeks later on the Fourth of July, was delayed to Black Americans, and in many ways is delayed still," said Gov. Pritzker.

Evanston's annual Juneteenth Parade kicks off at 11 a.m. on Saturday and will end in Ingraham Park.