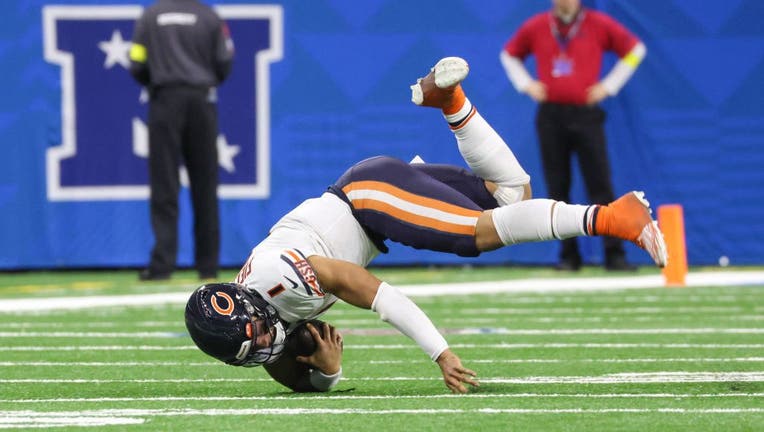 Chicago Bears quarterback Justin Fields (1) trips as he runs with the ball during the fourth quarter of an NFL football game between the Chicago Bears and the Detroit Lions on January 1, 2023 at Ford Field in Detroit, Michigan. (Photo by Scott W. Gra

Fields will end the season just 63 yards short of breaking the quarterback rushing record of 1,206 set by Baltimore’s Lamar Jackson in 2019 during his MVP season.

Nathan Peterman will be starting in Fields' absence against the Vikings.

Fields said after Sunday’s blowout loss at Detroit his hip was sore. Eberflus said it was bothering him Monday. An MRI confirmed the strain and the team’s medical staff ruled him out for the game against NFC North champion Minnesota on Sunday.

Fields has been one of the few bright spots for a rebuilding team in its first season under Poles and Eberflus. The Bears (3-13) set a franchise record by extending their skid to nine games and matched one with their 13th loss in a 41-10 blowout at Detroit on Sunday. The only team with a worse record than Chicago is Houston (2-13-1).

In his second season since being drafted 11th overall, Fields has completed 60 percent of his passes with 17 touchdowns and 11 interceptions.

Eberflus said it is "not a long-term injury" and Fields would have been sidelined even if Chicago had a playoff game this week.

Eberflus insisted holding out Fields was a medical decision and not an attempt to boost the Bears’ shot at the No. 1 pick.

"I would just go back to our normal operating procedure," he said. "So what is it? It’s the medical staff, so he didn’t clear that hurdle. So if he’d have cleared that hurdle, then we’d have to go to the next one, which is the coaches. Is he functioning the way he can function to protect himself, right? Then it’s the player. Does he feel good about doing that. So he didn’t clear the first one. So, that’s just where it is."