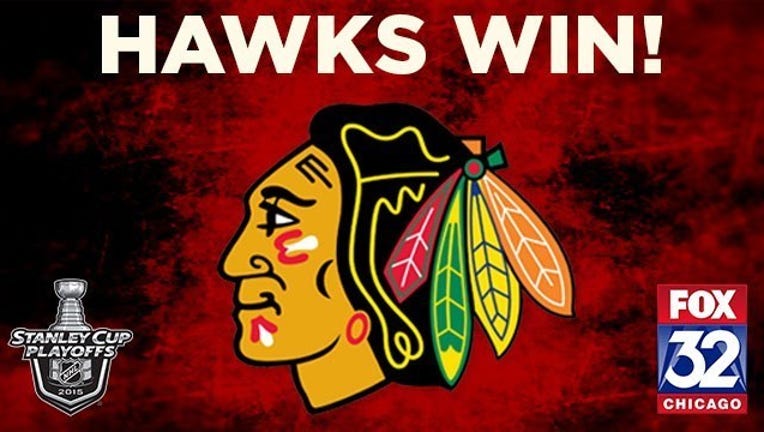 ST. PAUL, Minn. (AP) - Patrick Kane scored in the first period for Chicago, and Corey Crawford and the Blackhawks made the superstar's goal stand up for a 1-0 win over the Minnesota Wild on Tuesday.

Chicago took a commanding 3-0 lead in the Western Conference semifinal series. Game 4 is in Minnesota again on Thursday.

Kane has six goals and five assists in nine playoff games, bouncing back just fine from the broken collarbone that kept him out of the last quarter of the regular season.

Crawford made 30 saves, giving him 90 on 94 shots in the three games. Stifled time after time on chance after chance, the Wild have scored just once over their last 150-plus minutes on the ice.

The Blackhawks last led a playoff series 3-0 in the Western Conference finals against San Jose in 2010, when they went on to win the Stanley Cup.

An overnight power outage softened the ice, sending the arena scrambling to restore the surface in time for the morning skates. The skating conditions were back to normal by nightfall, and there was sure no slowing down the Blackhawks.

All they needed was a split second, a narrow opening or a friendly bounce, and all of a sudden they were on the rush. Devan Dubnyk made a difficult kick save early to fend off Jonathan Toews off a lead pass by Marian Hossa.

Then Patrick Sharp centered to Andrew Shaw, who poked the puck just enough to his left where Kane skated unabated up the wing. The 26-year-old speedster snapped a low shot that slipped past Dubnyk's pads to quiet the buzz in the crowd.

Only Tampa Bay's Tyler Johnson has more goals in the NHL this postseason than Kane, who has nine goals and six assists in the 14 playoff games against the Wild over the last three years.

Matt Dumba rammed Kane into the boards at one point, causing the curly haired wonder to remain on the ice for a few seconds and slowly rise to his feet. But as hard as the Wild played, they couldn't turn any of their prime opportunities into goals.

The Blackhawks blocked 13 shots over the first two periods, and the Wild shot wide or high just as often. They were more apt to try the kind of cross-ice passes the Blackhawks execute so well, rather than carry the puck into the zone; many of those were chipped away at the perfect time to create a rush for Chicago the other way.

Jason Pominville and Thomas Vanek particularly struggled to get shots on target, their frustration obvious. Mikael Granlund had a breakaway in the second period, but Crawford denied him with his blocker.

The Wild brought the most productive power play in the league into these playoffs, with six conversions in 17 attempts entering this game. But they fell flat with an 0-for-3 performance that included no shots on goal on two of the opportunities.

The Wild scratched Chris Stewart because of an upper body injury suffered in a collision with the boards in Game 2, moving Jason Zucker up to the line with Mikko Koivu and Nino Niederreiter. That trio produced the majority of the chances for the Wild, ultimately for naught.

Kane's return from injury has been a boon for the Blackhawks, but he's not the only one who's bounced back. Crawford was benched for Scott Darling in the first round against Nashville, only to regain his post at the end of that series and solidify it with this stellar performance against the Wild.

NOTES: The Blackhawks entered the game ranked 15th of the 16 playoff teams on the penalty kill, surrendering eight goals on 27 attempts. ... Dubnyk made 21 saves.