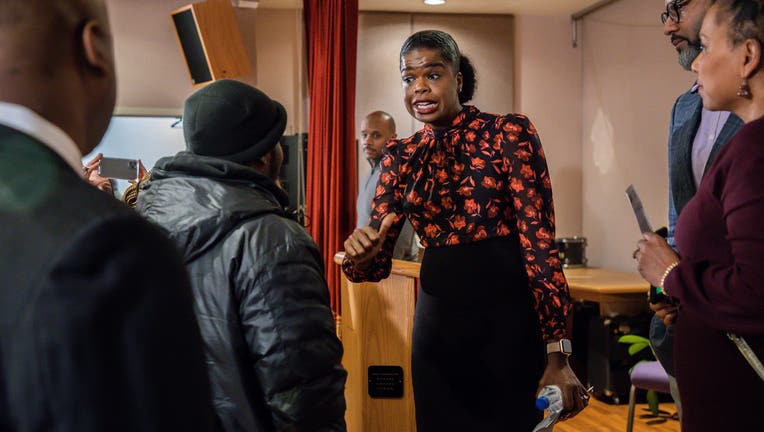 CHICAGO - Chicago mom Rya Smith has no doubts about backing the top prosecutor in nation’s second-biggest county for another term, even while acknowledging the office fumbled a criminal case against “Empire” actor Jussie Smollett.

Cook County State’s Attorney Kim Foxx’s involvement in the Smollett case has dominated much of the attention in her reelection campaign, but Smith contends the focus instead should be on her record exonerating the innocent, tossing minor marijuana convictions and as the first black woman in the job.

“She’s done a great many things, especially for minorities,” Smith said. “The Jussie Smollett case was a pebble in the giant boulder of her career. That shouldn’t discredit her for one little mistake. She isn’t getting a fair shake.”

Foxx is counting on more voters like Smith as she seeks a second term against three Democratic primary challengers who’ve seized on the Smollett case and a fractured relationship with police. In what’s likely the most expensive race of its kind, they’ve called it a bungled prosecution that benefited a politically-connected person and undermined public trust.

The controversial decision to dismiss charges against Smollett, who’s accused of fabricating a racist, anti-gay attack, has haunted Foxx, something that’s increasingly frustrated her. She declined an Associated Press interview but recently called the Smollett focus, “B.S.”

Defeating Foxx will be tough with her establishment backing, union support and super PACs targeting her opponents. But challengers — including Navy veteran Bill Conway, whose first run for office is being fueled by his billionaire father — believe they’ve found an opening for Tuesday.

“She just kept not telling the truth to the public,” said Conway, 41, a former assistant state’s attorney.

Foxx acknowledged missteps. She recused herself from the Smollett case, but questions linger about whether she acted improperly for speaking to a Smollett relative and aide to former first lady Michelle Obama before the charges were dismissed. A special p rosecutor reinstated the charges last month, which Foxx blasted as political.

“That we are continuing to talk about this in a city that continues to deal with gun violence, in a city that is continuing to reckon with police accountability,” Foxx told the Chicago Sun-Times. “That somehow this case has been elevated to one of the greatest criminal injustices in our time feels disingenuous.”

Foxx’s office was the first to dismiss low-level marijuana convictions as part of Illinois’ law legalizing recreational marijuana. She personally handed over roughly 1,000 petitions to a judge.

She ramped up a Conviction Integrity Unit with prosecutors vacating convictions of roughly 100 people linked to a former Chicago police sergeant’s scheme to shake down poor and black public housing residents.

Josh Tepfer of the Exoneration Project at the University of Chicago Law School called Foxx’s office “the most transparent” he’s worked with, noting she apologized to victims even though they were convicted before her tenure.

“She speaks to the unfair treatment of people of color in ways that are very unique,” he said.

The resonates with Tanya Watkins, who runs Soul in Action, a PAC that focuses on black candidates. Nearly one-quarter of Cook County’s 5.1 million residents are black.

Watkins believes Foxx hasn’t received fair treatment because of race. The other candidates are white.

“She has no margin for error,” Watkins said. “The things I’ve heard said about this black woman have reminded me how much more difficult it is to be a black woman in the public arena.”

Defense attorneys note the easing up on charges for lower-level crimes and alternative punishments. Some also praise her cash bail reforms. Her office has allowed the release of detainees held on nonviolent charges who can’t afford bonds up to $1,000.

But others aren’t so complimentary.

Foxx has a rocky relationship with police, who dislike her reforms, including for nonviolent crimes like shoplifting. Things worsened when the Smollett charges were dropped. The tensions hit a peak in April with dueling protests outside her office involving the police union.

“There’s this attitude among law enforcement that this is a ‘catch and release’ system,” said Kulmeet Galhotra, who’s retired as the head of the Cook County Public Defender’s Homicide Task Force.

Some defense attorneys are also critical of her office for inconsistencies, saying the policies aren’t applied evenly.

Still, the Smollett does resonate with some.

Chicagoan Demetrius Williams, 35, voted for Foxx before but thinks Smollett got off easy and will support Conway.

“I believe he has enough money to take on Kim Foxx,” said Williams, 35. “I’m not going to say that I’m so Conway crazy. I’ll take a chance. In four years, I can vote him out, too.”