Crews responded Friday to a large church fire on Chicago's South Side.

CHICAGO - Crews responded Friday to a large church fire on Chicago's South Side.

The Antioch Missionary Baptist Church in the Englewood neighborhood began to burn around 2 p.m. The cause of the fire is not yet know. No injuries due to the fire were reported.

Not long after Pastor Gerald Dew returned home from a noon Good Friday service at Antioch Missionary Baptist Church, he got a call that the legendary South Side church was on fire.

Crews responded Friday to a large church fire on Chicago's South Side.

He got in his car and raced back to the historic building at 63rd and Stewart and was initially hopeful when he saw white smoke, thinking the fire was already out. But then he saw black smoke and knew the fire was still raging.

Within minutes, firefighters evacuated the stone church as flames continued to spread and the building’s truss roof collapsed.

"This church is an anchor in this community," Dew told reporters at the scene. "If we’ve got to lose something, losing it on Good Friday is the best time to lose it because, after Good Friday comes Resurrection Sunday.

"God has something better for all of us who loved and belonged to the Antioch Missionary Baptist Church," he added.

The fire appeared to begin in the upper rear of the church, where crews who responded at 2:15 p.m. noticed heavy smoke, Fire Department spokesman Larry Langford said. No one appeared to be inside the church at the time. 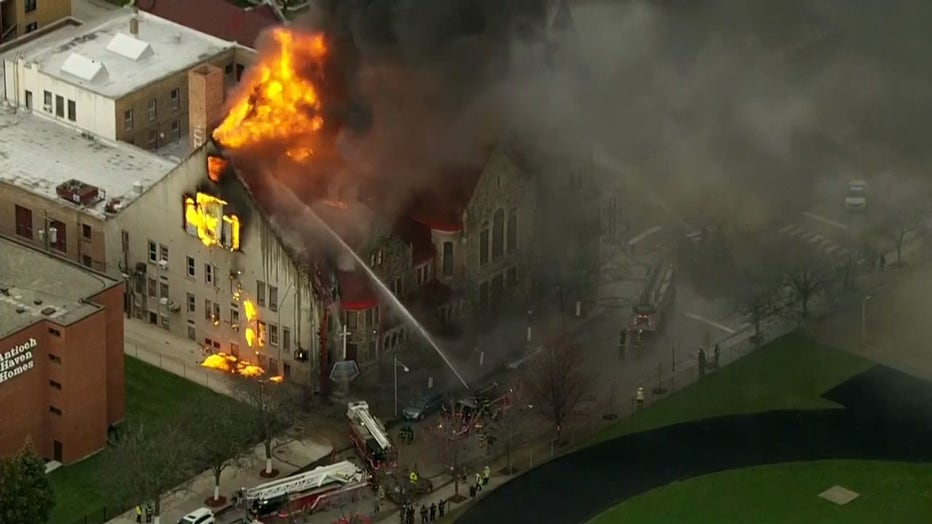 Around 150 fire personnel and 50 engines, trucks and ambulances went to the scene, Langford said. The only reported injury was a firefighter who slipped on the street and injured his ankle, he said. He was taken away in an ambulance.

Firefighters first tried to battle the flames from above, but the truss roof made those efforts "extremely dangerous" and the order was made to evacuate and go on the defensive, Langford said.

The fire was put out in around two hours. A church wall along Stewart Avenue was unsupported and at risk of falling, Langford said. It was too early to tell what caused the fire, he said.

The South Side church is well-known for its political clout and community involvement, investing in several housing projects starting in the 1960s. The church claims to be the first church to take advantage of the National Housing Act to build senior housing with special government loans.

The church now provides over 1,500 units of affordable housing for seniors, the physically handicapped and for families, Dew said.

"This has been a place where people have gotten married, found their faith, been encouraged and been empowered," Dew said. "It’s a neighborhood church and we love the community. And we’ve learned how to give back to the community."

The congregation will not be moving because of the fire, Dew said. "All this does is give us a greater reason to redouble our efforts, to be intentional about our involvement and commitment to this community," he said. 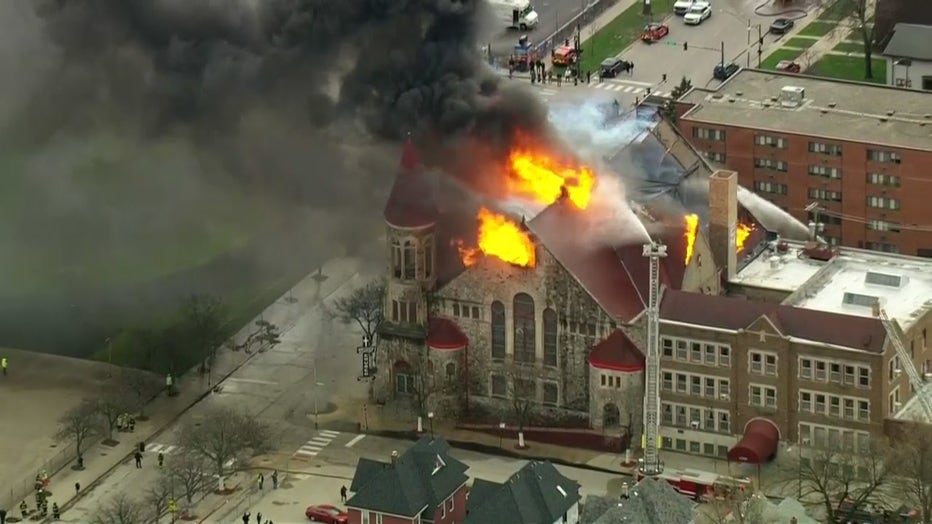 The church’s late pastor, Rev. Wilbur N. Daniel, was a noted ally of the Daley family and had been president of the Police Board. Daniel, who died in 1999, called his church’s involvement in affordable housing a matter of "Black progress" that was often ignored by outsiders but appreciated in the community.

The church building, built in the Romanesque Revival style, was constructed in the 1880s, according to records from the Chicago Historic Resources Survey.

The church says on its website that it closed its doors for the first time when the pandemic hit, from March 22 of 2020 to April 4 the following year. The church again closed its doors as COVID cases began to rise again earlier this year. It has just reopened to services last month.

"Like a phoenix, the Antioch Missionary Baptist Church continues to rise and move forward in faith," the website said.

Asked about the loss on Friday, Dew responded, "God is in control. And nothing that does happen can happen outside of His will, and He has the power to work all things together for our good and His glory.

"So I’m just waiting to see what fabulous thing he’s going to do next," he said.

Sources familiar with the investigation say repair work was being done on the roof prior to the fire.

Dew says despite the tragedy, there will be Easter service like never before on Sunday. Antioch will host Easter service at 10 a.m. at Callahan Funeral Home, located at 7030 S. Halsted Street.