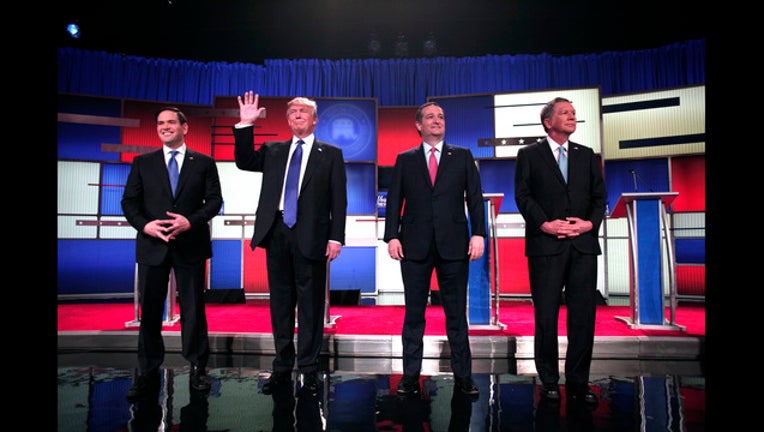 DETROIT (WJBK) - The race for the Republican nomination has the feeling of a bad family wedding where too many drinks have been had and a fist fight has broken-out on the dance floor.

Yesterday's throw-down began with Mitt Romney appearing like the grandpa who smells of mothballs and nobody wants to hug. In a spectacular breach of political protocol, the one-time Republican nominee ripped front-runner Donald Trump as a “fraud” and a “phony” and effectively called for a contested convention to snatch the nomination from him should the cards eventually – and probably -- fall that way.

The day ends with Trump telling me that Romney is a “complete failure', a “fraud” and a “two-time loser.”

If the white working class people I spoke with outside the Fox Theater in downtown Detroit are any barometer, the Romney stunt backfired. It only confirmed to them that the elite and the one-percenters of the Republican party despise the will and intellect of the ordinary American.

“Thank God they wrote one person one vote into the constitution or the party bosses would try to steal that too,” said Kevin, a construction worker standing the the snow waiting to enter the theater. "I want Trump to go to Washington and knock the tables over."

Nobody here seems to have forgotten Grandpa Mitt's crack that 47% of America is a dead-beat soaking up a government check.

And in a incredible example of political dementia, Grandpa Mitt seems to have forgotten his full-throated acceptance of Trump's endorsement in 2012 at the Trump International Hotel in Las Vegas. “Isn't he a huge business success?” Grandpa Mitt crowed.

Which brings us to the debate itself. I don't know if there was a winner on policy, but that does not seem to be the point of the debates anymore. The debate -- as expected -- was a complete spectacle and the entire evening seemed designed by the Republican establishment to push The Donald down' the marble staircase.

We learned about Trump's alleged sham college, Trump's clothing-line made in Mexico and China, Trump's budget numbers not adding-up, Trump's hotel employees being shipped in from over-seas, Trump's back-peddling on immigration in an off-the-record conversation with the New York Times.  (One outlaw biker in attendance told me he was "pissed off" to find out The Donald had flipped-flopped on immigration to a group of Liberal East Coast Media.)

We even learned that Trump's got the right stuff when in come's to the girth of his junk. “I guarantee you, there's no problem,” Trump assured.

It's entertaining watching cousins beat each other with beer-bottles and the ratings have been fantastic. The crowd of 5,000 Midwestern Republicans in attendance was as rowdy and raucous. But little was said about jobs or Detroit or Flint or Michigan or the Industrial Midwest for that matter. Nobody mentioned Republican Governor Rick Snyder (a no-show), whose handling of the Flint water crisis may have doomed the GOP's chances in Michigan. Flint itself got 30-seconds of discussion.

The evening's nadir can best be summed up during the lengthy litany over the alleged deceits of Trump University.

Sen. Marco Rubio of Florida, whose has become increasing shrill and desperate with each primary loss, called Trump a “con-artist.”

Trump, as is his custom, took the low-road, ridiculing Rubio's manhood and work ethic in the senate: “You defrauded the people of Florida, Little Marco.”

Senator Ted Cruz of Florida piped in: “Is this the debate you want?”

And poor John Kasich, the competent governor of Ohio, the rational uncle nobody listens to, attempting to step in the middle and bring the family to its senses: “Let's stop fighting!”

And in the end, the candidates promised to support Trump should he be the nominee.

And it was Trump who, instead of laying in a bloodied heap, took the long walk up the marble staircase in the grand foyer of the Fox Theater; the lights of cable television beckoning his presence.