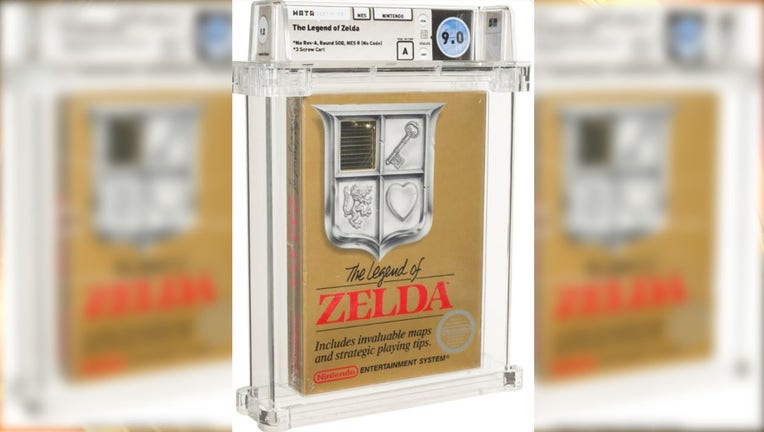 DALLAS - A popular video game from the 1980s snagged a record-breaking price tag at an auction this week. An unopened copy of Nintendo’s The Legend of Zelda that was made in 1987 sold for $870,000.

It was part of Heritage Auctions Video Games Auction, which is continuing through the weekend.

Auction officials had a feeling the game was going to bring in a big amount since it was an extremely rare version. They said it was the earliest sealed copy of the game likely to ever hit the market.

"This is the only copy from this production run we've ever offered in sealed condition, and may very well be the only one we ever offer in this elite level of preservation for many years. Its rarity is superior to that of any sealed game we've offered to date, it is a true collector's piece," Heritage Auctions Video Games Director Valarie McLeckie said in a statement.

For "Legend of Zelda" aficionados, it is widely believed that the copy sold Friday is one of just two sealed "NES TM" copies graded by Wata. It is from a variant of the game that was produced for just a few months in late 1987 before it was replaced by the "Rev-A" variant in early 1988, according to a press release.

The Legend of Zelda is a popular fantasy adventure game that was first released in 1986.

McLeckie said the game marked the "beginning of one of the most important sagas in gaming." And its $870,000 price tag arguably backs up his claim.

"I had a lot of confidence in this game, and, yet, I still feel like the reality of today's bidding exceeded my vision of how it would play out," McLeckie said. "Making history is never an easy thing. I'm just really proud we got to be part of this yet again."

In April, the auction house sold an unopened copy of Nintendo’s Super Mario Bros. that was bought in 1986 and forgotten about in a desk drawer for $660,000.

The auction house had other Zelda games open for bidding throughout the weekend, including one which had already garnered a bid of more than $100,000.

The auction also had Game Boy and Xbox games available as part of its Video Games Signature Auction.

This story was reported from Detroit.