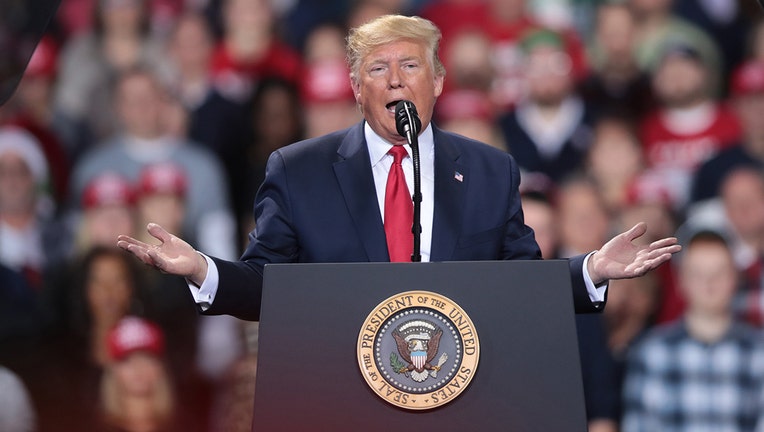 BATTLE CREEK, MICHIGAN - DECEMBER 18: President Donald Trump addresses his impeachment during a Merry Christmas Rally at the Kellogg Arena on December 18, 2019 in Battle Creek, Michigan. While Trump spoke at the rally the House of Representatives vot

WASHINGTON - Voters give the economy its best ratings in nearly two decades in the latest Fox News Poll -- and credit President Trump.

And yet as his impeachment trial begins, Trump’s job approval holds steady, while half say the Senate should remove him from office.

The poll, released Sunday, finds 55 percent give the economy positive ratings (excellent or good).  It’s been 19 years since this many felt as positively (59 percent in January 2001). 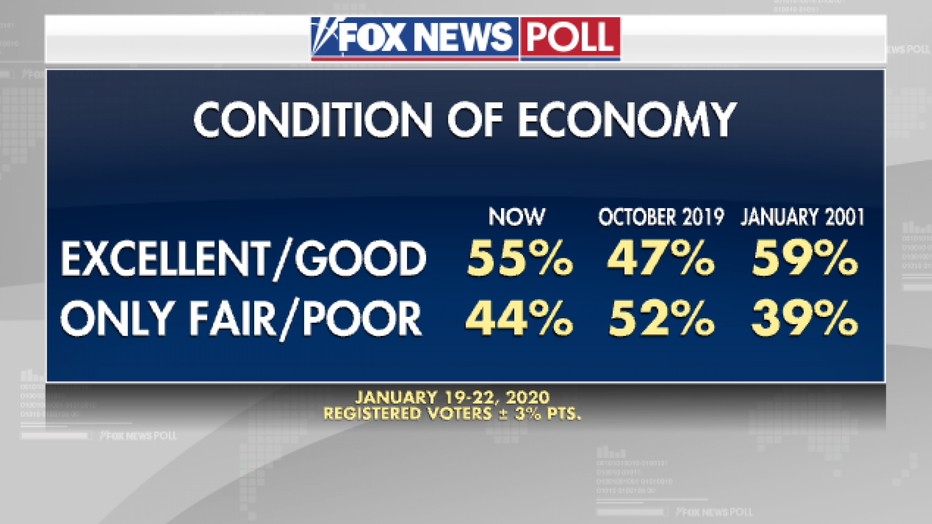 In addition, a new high of 20 percent say the economy is in “excellent” shape, up from 14 percent in October 2019.  It was 3 percent “excellent” in the final month of the Obama administration (December 2016).

Moreover, the bulk of voters credit Trump for the economy.  When asked to say who or what they think is most responsible for the current economy, without the aid of a list, the top answer is Trump and Republicans (42 percent).  Next, mentioned by far fewer, is former President Obama and Democrats (9 percent) and big business (7 percent).

At the same time, 55 percent think the way the economy works is unfair, and a 56 percent majority remains dissatisfied in general with how things are going in the country. 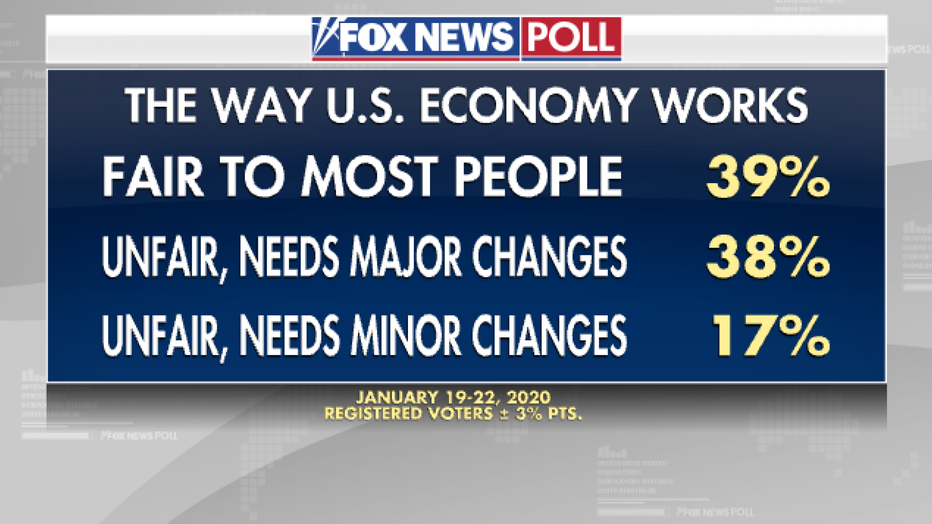 The 43 percent happy with the way things are going is two points lower than the 45 percent who felt that way at the Trump administration’s 100-day mark in April 2017. 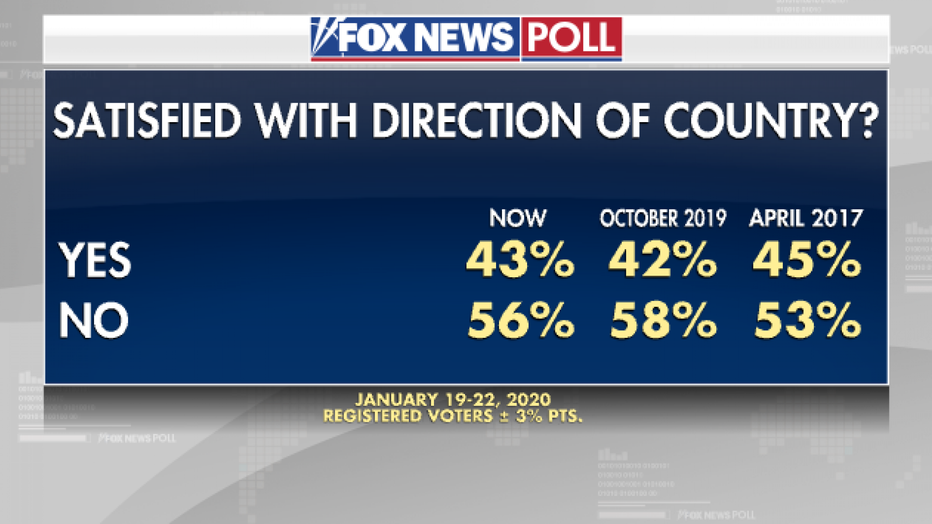 These opinions are rooted in partisanship.   Most Republicans rate the economy positively (85 percent excellent or good) and are satisfied with the direction of the country (75 percent).  Most Democrats (82 percent) are unhappy with the way things are going and give the economy negative ratings (68 percent fair or poor).  Smaller majorities of independents are dissatisfied (60 percent) and say the economy is in negative shape (52 percent). 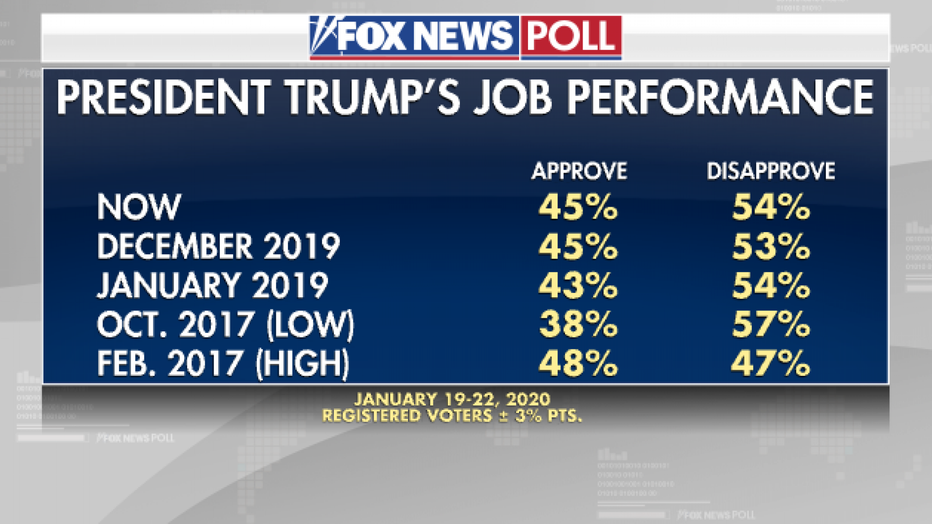 Approval of Trump hit a new high of 91 percent among Republicans.  That’s up from 85 percent last month.

Trump’s best job rating is on his handling of the economy: a record 56 percent approve, while 38 percent disapprove.  The previous high was 53 percent approval in July 2018.

Views are mixed on Trump’s handling of trade:  44 percent think he’s been successful in revising trade deals to make them more favorable to the U.S., while 45 percent disagree.

“The president’s job approval on the economy has consistently outpaced his overall job approval, and even many voters who may take issue with his tone or style will acknowledge the economy has been strong overall during his presidency,” says Republican pollster and Fox News contributor Kristen Soltis Anderson.  “A strong economy creates a good foundation for an incumbent seeking re-election, even if voters will also say things could always be even better or more fair.”

Democratic pollster Chris Anderson, whose firm conducts the poll with Republican Daron Shaw, doesn’t see it that way. “Trump’s approval on the economy is up, but this is tenuous ground on which to stake his re-election, because even though most think economic conditions are good, a majority also believes the economy is unfair,” says Anderson.  “Outside the Republican base, voters think the economy under Trump doesn’t work for most people.”

On impeachment, by a 50-44 percent margin, voters think the Senate should vote to convict Trump and remove him from office.  Most Democrats say remove (81 percent) and most Republicans disagree (84 percent).  Among independents, more say Trump should be removed by a 19-point margin (53-34 percent). 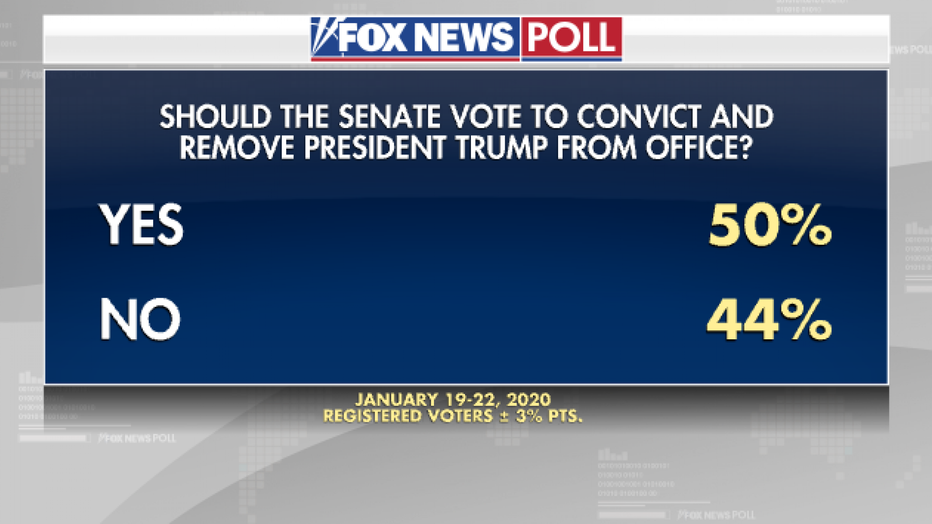 For comparison, around the time former President Bill Clinton’s impeachment trial began in January 1999, some 38 percent said the Senate should remove him from office, and 65 percent approved of the job he was doing as president.

When asked about the Trump impeachment trial, more voters by a narrow 4-point margin say the Senate already has enough information to make its decision (48 percent) than say additional witnesses should testify (44 percent). 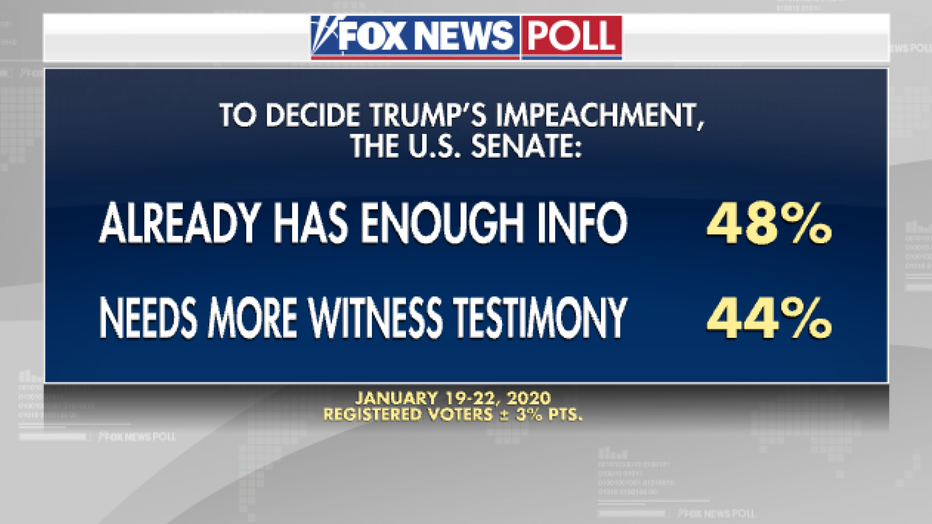 Forty-three percent have a favorable opinion of House Speaker Nancy Pelosi and 51 percent unfavorable, for a net -8 score.  Senate Majority Leader Mitch McConnell’s score is -24 points (30-54 percent) and Trump falls at -10 (45-55 percent).  Nearly half, 47 percent, have a “strongly” unfavorable view of the president.

Twenty-six percent approve of the job Congress is doing.  That’s up from 23 percent last month and 21 percent in May 2019 -- and this is the highest it’s been since May 2011.  Some 58 percent disapprove.

-- Forty-five percent feel confident in Trump’s judgment in a crisis.  That’s down from a high of 50 percent at the beginning of his term (February 2017).  Fifty-two percent lack confidence, including 42 percent who are “not at all confident.”

-- On Trump’s handling of relations with Iran, 27 percent think he has made the U.S. safer, while far more, 48 percent, say less safe.  About one in five say no difference (19 percent).

-- The bulk of voters, 47 percent, say Trump did the right thing when he ordered the U.S. military action that killed Iranian General Soleimani, while 37 percent think he did the wrong thing and 16 percent are unsure. 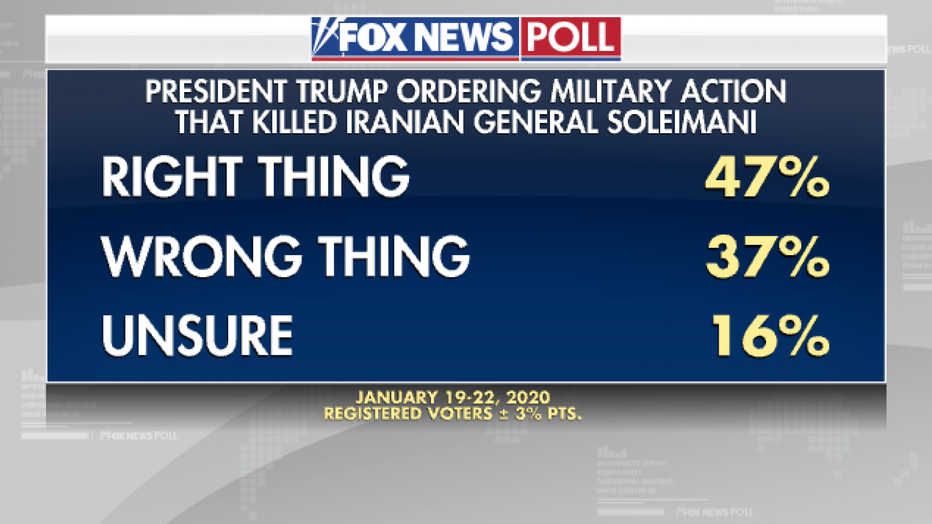 Conducted January 19-22, 2020 under the joint direction of Beacon Research (D) and Shaw & Company (R), this Fox News Poll includes interviews with 1,005 randomly chosen registered voters nationwide who spoke with live interviewers on both landlines and cellphones.  The poll has a margin of sampling error of plus or minus 3 percentage points for all registered voters.