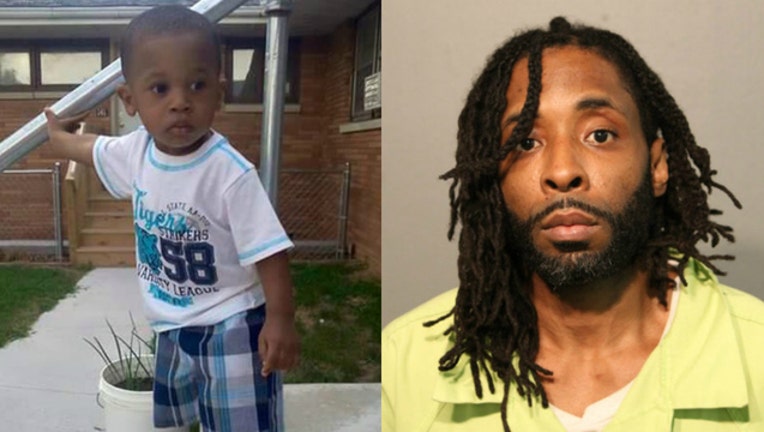 CHICAGO (AP) - A northern Illinois man accused of killing a 2-year-old son of his daughter's friend and dumping the dismembered remains in a Chicago lagoon was acquitted Thursday of murder charges.

Kamel Harris of Rockford was found not guilty of first-degree murder, dismemberment and concealment of a homicidal death by a Cook County jury, one day after he took the witness stand and proclaimed his innocence.

The mother of Kyrian Knox let out a wail when the verdict on the murder charge was read. Lanisha Knox then walked out before the final verdict was read.

"I can't believe this," Knox said.

Harris, 44, testified Wednesday that Kyrian's mother left the boy in Harris' care in August 2015 as she and Harris' daughter left for Iowa to set up new jobs. He told jurors three people later showed up at his residence, saying they were there to pick up Kyrian. He said a woman he believed to be Kyrian's mother gave him permission to do so by telephone.

"At the time it wasn't really nothing to think, when it's the mother telling you to do one thing or do the other with their child ... so I gathered up the boy and went upstairs and packed his bags," he testified.

Harris testified that while he was caring for Kyrian, he was also a main caretaker for his own son and grandson. He spoke fondly of his time with the three toddlers.

Informants who were incarcerated in the Winnebago County Jail testified they heard Harris admit to killing the boy. In his testimony, Williams suggested the informants lied to benefit themselves.

Parts of Kyrian's body were found amid a weed- and debris-strewn lagoon in Garfield Park on Chicago's West Side. Police found Kyrian's left foot in a grove of willow trees along the shoreline in early September 2015. They later found the child's right foot, both hands and eventually his head - weighted down with a barbell. Authorities never found the rest of his body.

Prosecutors said that after two weeks minding Kyrian and other children, Harris killed Kyrian in a fit of rage.

"He invented this fiction because he's trying to escape responsibility for what he did to that baby in this home," she said.

Defense attorney K.S. Galhotra repeatedly stressed to jurors that no forensic evidence tied the 44-year-old Harris to the killing. He said the prosecution case hinged on the testimony of three "snitches."

"This is an innocent man. The guy who did this is still out there," Galhotra said after court.

Prosecutors in February reached an agreement with Harris in which he would plead guilty to involuntary manslaughter for sentence of about seven years. The deal fell apart when the victim's family objected.